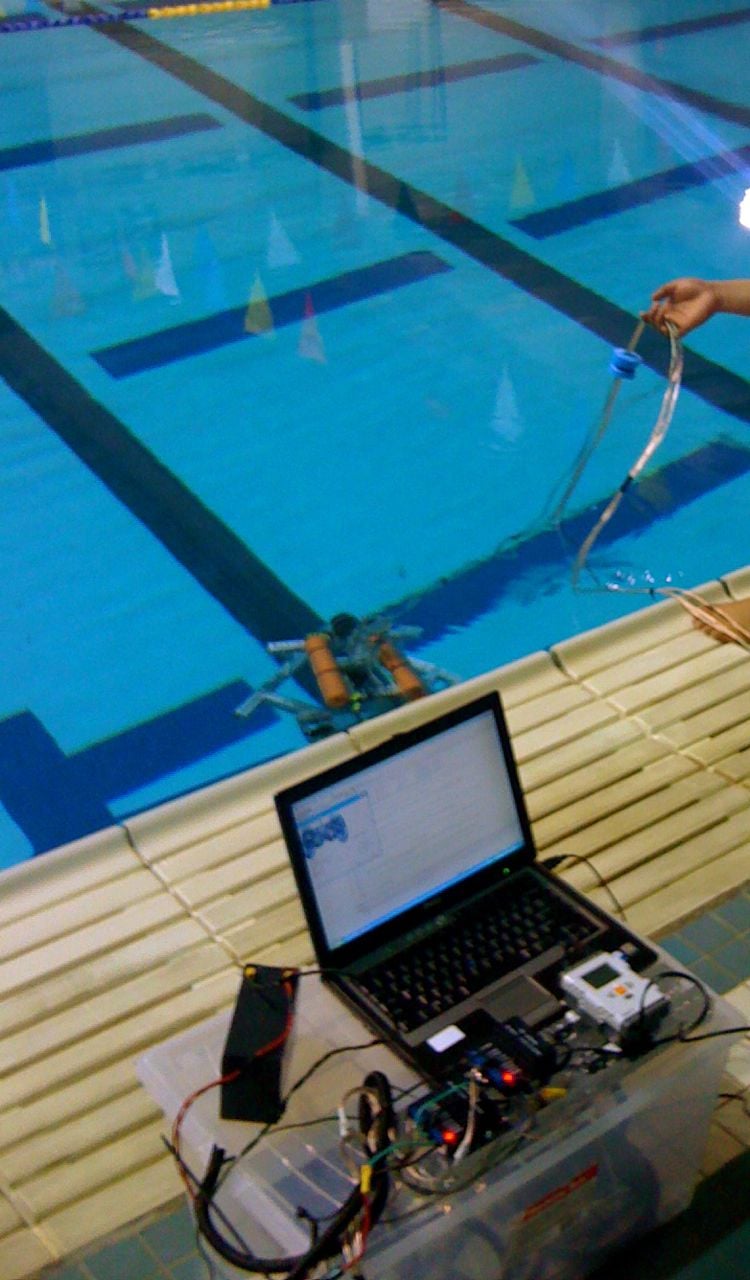 HS juniors from the LEE STEM academy have converted a ROV-in-a-Box kit to a frame build from Tetrix metal and controlled via the NXT/Tetrix motor controllers. A simple tele-op code written in RobotC along with a RCA video to USB converter allows the pilot to control the ROV via a laptop with a live video window open.
MrForbes May 9, 2010, 9:06pm #2

Neat! Is there more info about it somewhere?

I took a chance that the Tetrix motor controllers could handle the bilge pump motor as a quick web search didn’t yeild a data sheet for the controller power capacity. I like the ability to program with the game controller and since we needed a laptop poolside, I found an inexpensive USB converter for the camera video so the laptop serves two purposes. We just finished bouancy test number two so nothing on paper as of yet.

I’d like to experiment more with the Tetrix metal for the frame as we just discovered that we can chase the wires in the u-channels and then put pool noodles in that channel for bouyancy. It could really clean up the build.

One thing you might discover with pool noodles, if you go very deep, is that they compress…and you lose more buoyancy the deeper you go! Usually not a problem in an 8ft pool

Want to learn more about under-water robotics::rtm:: Consider attending a low-cost, 2 day workshop here at the Texas Institute for Educational Robotics in San Antonio, Texas. It will be led by the Texas MATE-ROV tournament organizer, Ike Coffman. Higher priced registration option allows the participant to keep the ROV that they build in the workshop. We will be using the ROV-in-a-Box kits to prototype a basic ROV plateform. The ROV pictured in this thread will be available for hands-on demo / viewing during the workshop. Send me a pm / email if you would like to have a flyer sent to you via email attachment. Information learned will allow you to have a running start for either/or both the MATE-ROV or NURC competitions next year. Workshop will be in mid-July. Proceeds from this workshop will be used to provide a small stipend for the workshop presenters so this is a not for-profit event.