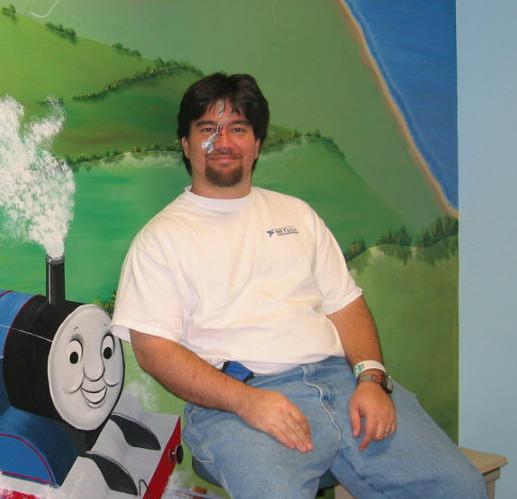 Some people ask me why I have the designation of “FrankenMentor”. FrankenMentor reminds me of 2 things: (1) bungee cords are dangerous and they really hurt when they hit you in the face, and (2) Duct tape can really be used for anything. While unloading the team trailer at a robotics competition, I lost my grip on a bungee cord and it popped up and the metal hook (no plastic cap) caught me in the upper right part of my face where the nose meets the eyebrow. It tore the skin about an eighth inch in 2 directions and I began bleeding everywhere (yeah, I am lucky I didn’t lose an eye). While I was trying to get it to stop bleeding and find out where the closest hospital was, the team coach grabbed a roll of duct tape, tore off a piece, and fashioned a butterfly bandage with it. It worked like a charm, the bleeding stopped! The nurses at the hospital (where this pic was taken) loved the duct tape bandage, and after getting 9 stitches the team took one look at me and declared me a “FrankenMentor”. It kinda stuck, but everyone who knows me knows I never back down from Bungee cords but I am a lot more cautious than I use to be.