pic: The finalists on Curie! 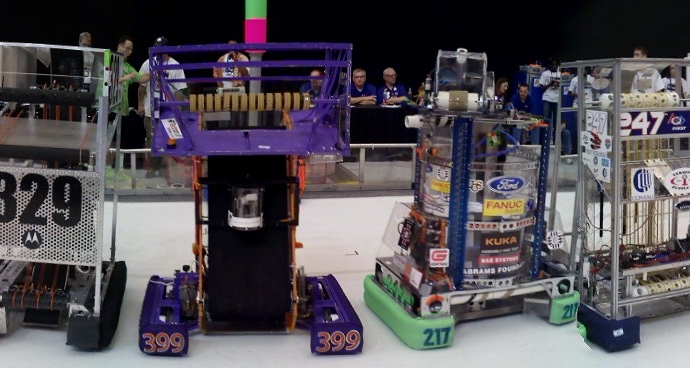 A panoramic shot of all the robots in the finals on Curie. We were waiting to place robots in their autonomous positions. Obviously no one wanted to be first

I was hoping someone got a picture of this. I knew going against 188 and 399 that this would happen. The rules this year did not clarify who was to place first so we had a stand off. We actually had to have a compromise and ran the idea bythe head ref.

I was wondering how long the field crew would let us stay like that.

I thought it was quite hilarious and that picture is now my background on my computer.

I wondered what was going on on the field and why you kept talking to 399 and 188’s team on the field. That’s pretty hilarious. I love watching you guys come up with strategy, especially the final supercell strategy you were using. It was ingenious.

It was in the rules, there just was no enforcement provided:

<T15> The qualification match schedule will indicate ALLIANCE partners and match pairings. It will also indicate the ALLIANCE color assignment, “red” or “blue,” for each MATCH. Before queuing for a match, the ALLIANCE members must choose which TEAM will occupy each of the three possible locations for each of the ROBOTS and PAYLOAD SPECIALISTS.

What did the ref decide?

They agreed with our proposal, which was similar to the Michigan State Championship.

we basically agreed to tell the cuers where we will be placing and then share with each other where we would be placing prior to actually placing. This way, we all knew that the placing was made blind.

In the end, it didn’t change where we placed our alliance robots. We did not change robot position even once during auton.

That is pretty funny. Really changing starting position did not have a huge impact on the match but that is very interesting.

On a completely unrelated note, Paul were you guys tracking at all or was that all manual control on the shooter?

The camera tracked when we turned it on. However, our student operating the shooter never used it in a real match during competition. The camera mounted on our robot was a training wheel that after much practice he never ended up using.

This, was a really an enjoyable, and interesting match to play in. When i was shooting the orbit balls from my hand, i couldn’t focus on what to do, although i ended up doing pretty well. I even got a super cell in the last twenty seconds:D , but 217’s unique design let them shoot all the balls they had in their hopper into our trailer, in the last seconds, and that cost us the match.

217 was a really good team to play against, and to gain experience from. 68 and 247 following in their footsteps! Thanks.

This is definitely going to be my background picture for my desktop for some time. This is the furthest 188 has gotten in our history, and this was the best moment of my life!
Thank you to everyone making it possible!

From Looking Forward Week 3:
“So long as you don’t mind hideous orange and purple color schemes, 399 will be one of the better bots in LA. A simple dumping mechanism and large intake should make them effective, and if they drive well they will be a threat to anyone.”*

It served us well!

I think we had a great match and learned a lot from everybody associated with the match.

Paul, there were rumors about your timeout. Were you trying to “ice” us and stop the momentum after the second match?

Paul, there were rumors about your timeout. Were you trying to “ice” us and stop the momentum after the second match?

That is exactly what we were doing. It also gave us a chance to calm down and regroup.

In the following thread,
http://www.chiefdelphi.com/forums/showthread.php?t=76898&highlight=399

Brad wrote:
One little thing I have to explain - finals match 3, when everyone thought we got lured in to get the super cells scored on us… I had to do it. There were no balls on the field, we had 8 in our hopper, and real time scoring showed us as losing. Da bears were waiting in a corner to pin us against 217’s trailer once we scored. I saw everything Paul was doing over there, but I had to go for it, at least at the time I thought I did. We would score 16 points (and we did) and pick up the lead… Then we had to hope they missed the super cells. If they missed the super cells, and we didn’t score, we still lost (according to the real time… which means I had to make the score). We did what we did, but 217’s alliance simply outscored us. Either way. It was awesome.

These two snapshots below show how the last seconds of the Curie Finals went down. 399 Scores about 20 points to take the lead. I think, you can see Paul of 217 looking at the clock. There are two empty cells on the rack foreshadowing the results. In the second photo, Team 399 is trying to pull out, 68 blocked them for a second but it was long enough for the 217 Payload specialist to reach for the super cells.

He scores both to win by 20 points as Team 399 gets away. Nice shooting, the odds did not favor him scoring both. If you watch the video [TBA], team 399 scores one or two more cells before the end of the match.

I really think this was a great match, and a lot of strategy went into the whole match that the audience does not see or know.

Thanks to Stephen from 188 for taking these great
action shots.

One thing to note in the above depiction (which is perfectly accurate), I figured (I want to say “knew”, but you don’t “know” anything for sure in Lunacy) we only needed one of those super cells if 399 scored all of their balls. My guy had been much more accurate than 50% all weekend so it was a safe bet from my perspective. We won by 20, so we really did only need one of the two … phew!

One thing to note in the above depiction (which is perfectly accurate), I figured (I want to say “knew”, but you don’t “know” anything for sure in Lunacy) we only needed one of those super cells if 399 scored all of their balls. My guy had been much more accurate than 50% all weekend so it was a safe bet from my perspective. We won by 20, so we really did only need one of the two … phew!

LOL I remember Brad deciding to take the plunge while I was trying to see if our team mates could back us up with some extra shots, but by then the field was dry. We had one supercell in our area, but our shot percentage was really low. At the end of the match we picked up two more rocks, but by then the damage was done. It was a really great run and we had to take the risk. Paul, all I have to say is that you’re an amazing coach and it was an honor to play against your team.