pic: The long arm of the law. 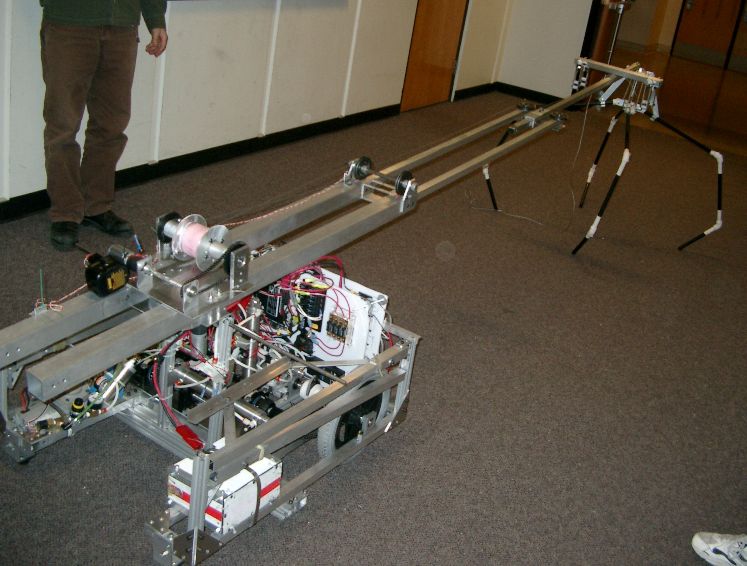 (I know this is shameless.)

Giving credit where credit is due, this robot came together, quite literally, overnight. A multitude of unfinished subsystems where completed by dedicated students and mentors in an overnight session so that the robot could be driven north several hours for a presentation we made to a high school interested in participating in FIRST next season.

The presentation went well and the temporary assembly functioned much better than many of us expected. More importantly, there’s another high school waiting in the wings, eager to participate in FIRST.

So, in more ways than one this season, my mystery team is reaching out and touching some folks. Good job

Congratulations. It makes me enviously happy to hear that another team broke their proverbial backs to build their robot early enough to have time to drive it to another school in order to intice them into being involved in FIRST. Uplifting conceptual story, IMHO.

Keep up the great work, M. I’ll always be jealous of any team you’re working with.

That is so cool looking. I can’t wait to see it if you guys are going to the spbli.

I may be wrong… but I see what looks to be 2 12" pneumatic cylinders (on the side towards the claw, just past the winch). I assume those both extend/retract to give enough force to put the grabber up or down. However, it seems that if this is infact the raise/lower mechanism, there may be an issue of arc when grabbing balls out of goals or putting them in. Then again, I could be wrong (about there being a problem) and whatever team that is may have already mastered their ball handling.

thats a nice looking robot. wat kind of string or rope r u guys using on the winch? and how are the claws closing over the ball?

from ur freinds on team 810

Thanks for the kind words, everyone.

The arm and claw uses a combined three motors and two pneumatic pistons for all of its actuation and control. The pneumatic pistons, however, are not used for the telescoping action. They are used to lower the arm into the horizontal position and to open and close the claw.

The arm extends and retracts via the globe motor and winch seen prominently in the foreground of the photo. It drives a cascading cable system, currently rigged with 1/8" steel cable, that extends the three segments simultaneously. It retracts by running the motor in reverse via winch drums of differing diameter.

Last season, I posted a lot of teasers without explaining what they did – but everyone knew what team they belonged to. This season, I’m more than willing to explain how things work – but I’m going to leave it a mystery as to which team we are talking about

Are you using that arm just to get the cap ball or does it also go up and grab the bar?

Are you using that arm just to get the cap ball or does it also go up and grab the bar?

It’s design revolves around the large multiplier ball and, as such, it is not designed for the load of a 130 lbs. robot hanging from it. However, it is used to deliver a secondary device that is designed for such loads.

Just wondering, do you guys have any center of gravity problems?

Just wondering, do you guys have any center of gravity problems?

Dealing with this robot’s center of gravity has been one of the most challenging aspects of its design. As such, our solution is also the design element that we expect to give us the most problems during competitions.

Our problems are not as you may expect, however, in that we’re not too worried about it tipping over as it drives around the field. The arm and claw mechanism weigh 35 lbs. and can be stored directly above the robot, and while this does raise the center of gravity slightly, it’s not nearly as concerning as having a 10’ long arm extended outward from the robot is.

The challenge we faced was that of an additional unknown that many FIRST robots do not have to consider. Many teams, when designing robots, can safely assume that their chassis orientation with respect to Earth does not change – that is, things are always level or at some known angle. Our design does not have this assurance, and so insuring that our chassis remains level to Earth was a prime design consideration. Therein lies our problem with center of gravity. An unknown or errant center of gravity means that keeping our robot’s orientation known and controlled is very difficult, if not impossible.

We do, however, believe we have a viable solution.