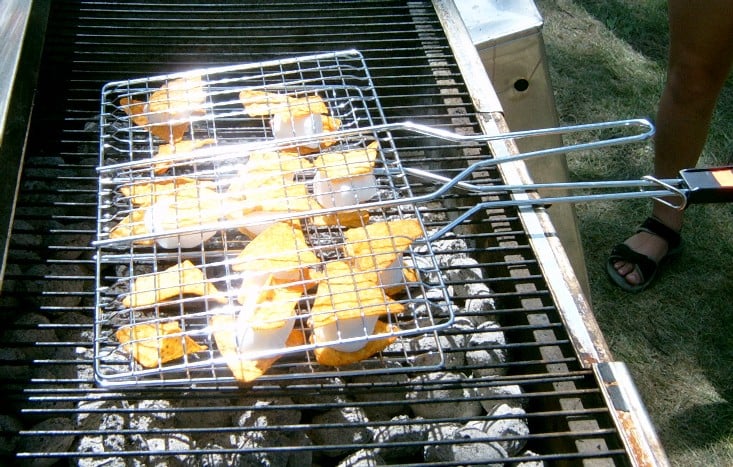 OMG! Those things rocked my socks! At first I didn’t want to try 'em but they are awesome!

What’s in it? =D
(Actually, more of how would you make one?)

apparently its a smore without chocolate and the grahm cracker. i dunno it kind of defeats the purpose, i know my tummy wouldnt respond well to doritos and marshmallows in one tasty snack…but thats just me

I just made one and it’s awesome!!

This would be an interesting combination. Cheese Doritos and marshmallows… maybe I’ll have to try them sometime since I heard people at IRI talking about how good they were.

i can see it working with plain nachos … but cheese?!

The origin of the Marshmorito is a funny story. While camping with friends on my 21st birthday, one of us decided that he was too lazy to get up and get s’more supplies from the tent. Instead, he devised the Marshmorito, and gave it a shot (he being an adventurous fellow).

While we expected a face of disgust, instead he leapt up in surprise! This ridiculous treat tastes like Lucky Charms cereal! One by one, he convinced us all to at least try it… we went through a whole bag of Doritos before we could satisfy our hunger! The recipe follows below.

Create a sandwich out of above ingredients, hold together with tongs. Roast over open flame until marshmallow is gooey, but not burnt. Make sure it is over open flame - a lot of the cheesy powder of the Dorito will burn off, but not all of it. Blackened Doritos make the best Marshmoritos. Don’t eat them right off the tongs/stick… the chips actually will stay hot for a few minutes after they come off the fire. Once the chips have cooled, but not the marshmallow, eat the entire treat in one bite, if possible. Chew, and voila! Lucky Charms cereal!

It sounds gross, it tastes great, it’s the Marshmorito!

This sounds like one of the stupidest things ever, but it really does taste good. The only time you really taste the cheese is when you are really trying to taste it. Even looking at them they don’t look to delicious, but if you like lucky charms I suggest you try one!

Where are the CHOCOLATE Lucky Charms?

Would the recipie work with Cooler Ranch Doritos, or is it only Nacho Cheesier?

Not sure… you can try it. The Nacho Cheesier! ones were the only we had on hand, and the only we’ve tried since.

If it tastes good, let us know!

That’s…
intriguing?
It sounds really weird, but I guess if I ever had the chance I may try one. Then again, when I’m sitting around the house and I get real hungry I pull together random crazy stuff.

The fire is the key! If there isn’t a flame, it won’t be as good. Make sure those chips are nice and toasted!

I’m not brave enough to throw chocolate on there…but you’re more than welcome to try it and let us know.

The fire is the key! If there isn’t a flame, it won’t be as good. Make sure those chips are nice and toasted!

I’m not brave enough to throw chocolate on there…but you’re more than welcome to try it and let us know.

Hmm… fire is the key? I’m not sure if the FL regional organizers would look too kindly on a big open flame in between the outdoor pits and the UCF Arena next year. Oh well, I guess it’s worth a try