pic: The Men in White Coats 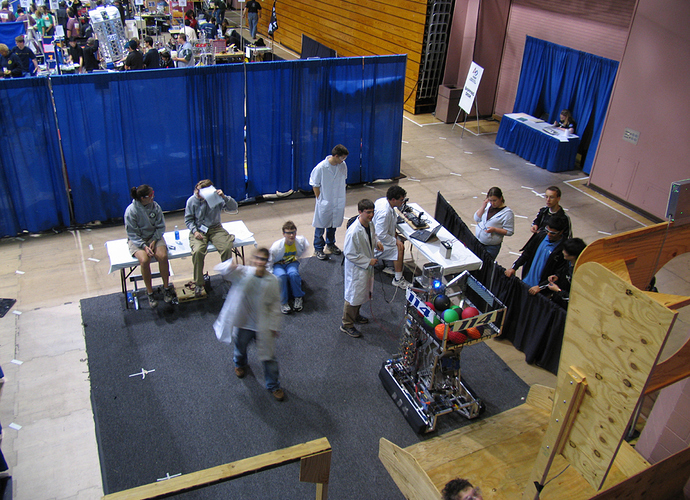 Here we are, the men in white coats.

This photo was taken at SVR, on the practice field. We were adjusting the lookup tables for the auto-fire setup, and doing a general systems test. Also visible is the overly complex robot (named AIMBot), sitting and about to fire. You can tell (if you look closely) that the camera is locked, and the turret is aimed and ready to fire.

Our turret served us well this year, as we only had a single mechanical failure on the entire robot: a bolt being slightly loose and causing another bolt to catch on it.

So overall it was a good season!

Cool threads! Just curious, did you have any jamming problems with that hopper?

604 went to both the PNW regional in Portland and the Silicon Valley regional, and your auto-aim programming was absolutely amazing! 114 had some bugs at Portland, but resolved them all by Silicon Valley, allowing them to sink shots from anywhere on the field.

Don’t you have any ladies in white coats?

Don’t you have any ladies in white coats?

Yes there are three ladies on the team.

Cool threads! Just curious, did you have any jamming problems with that hopper?

We never had any problems with jamming. That is, *after *we added in a couple featrures. What looked to the audience like our turret losing lock and searching was actually a hopper agitation method, which panned a bar attached to the turret inside of the hopper. All in all, we were quite happy with our design, as we could hold about 34 balls when we were full.