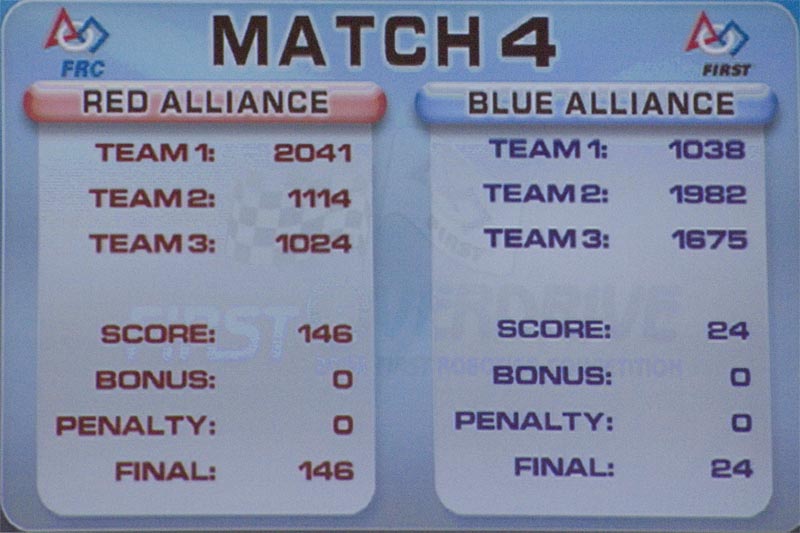 This is what happened when we tried to go 1 on 3 against the eventual winning alliance in the Midwes Quarter Finals… It was not pretty for the blue alliance…
Corey_Oostveen December 31, 2018, 10:47pm #2

Wait…so you tried taking on a 3 robot alliance with 1 robot. Or did 2 of the robots break down during the match. Did you guys not want to use the subs?

Why were two blue robots non-fuctional in a quarterfinal match?

1038 did a fantastic job on the Blue Alliance in this match. All those points, as I remember it, are theirs.

They had one robot not ready and waited a little long for the substitution period, and another of their robots… well something happened, can’t quite remember what… I think it was a tip over?

Why were two blue robots non-fuctional in a quarterfinal match?

Bad luck. i beleive one tipped and the other just didnt exist… that alliance had a tough break )=

1675 was a last-second scratch when they discovered that their robot would not power up on the field, due to distribution block problems. Because of when this occurred, they were not allowed to call a timeout. 1982 tipped almost immediately after driver control started, as the result of legal bumper-to-bumper contact.

so since it was last minute they could not call on a sub?

so since it was last minute they could not call on a sub?

I’m guessing that it also was well beyond the time for calling in a sub, but in any case, a representative from their team indicated in another thread that since the robot was fixable, they were not interested in subbing out.

so what was the next highest score that was 3v3? I figure someone here on cd will know.

so what was the next highest score that was 3v3?

Wow – an elimination round match between two alliances with all teams numbered over 1000! Such a match is unprecedented at the Granite State Regional, where over half of the teams have numbers less than 1000!

146 points is absolutely incredible, though, even in a 3-on-1 match!

As posted in the Midwest thread:

We (1675) had to pull out of the match at the last second because a battery lead came loose from the RA Distribution Block somewhere between our pit (where everything was tested and checked out fine) and placing it on the field. The crew would not grant us a time out to repair it, so we pulled off the field to do so (in hindsight, leaving the bot on the field would have at least caused a bit of a bottle neck in that corner and possibly slowed down 1114 and 1024, but it was fun to see such a high score). There was nothing wrong with our bot so there was no reason to call in a replacement. Our defense took out 1114 in qualifying before, so there’s no way we weren’t going to give it a shot in the second match. Had our alliance had two full matches against them, I think we could have made it a pretty close second match, but the best alliance definitely took home the gold. Congrats to 1114, 1024, and 2041!

We seem to be developing a history of only playing in QF match 2…every time we’ve been in the quarter finals, we’ve had some sort of battery problem in the first match (and one time we played back up in the second match). At least its never been the same problem twice, so hopefully we’re getting it all out of our system and there’s nowhere to go now but the semi’s!

I hope, someday soon, that posts like this will break some of the low number teams out of their “everyone in thousands are rookies” mindset. See all those high numbers?