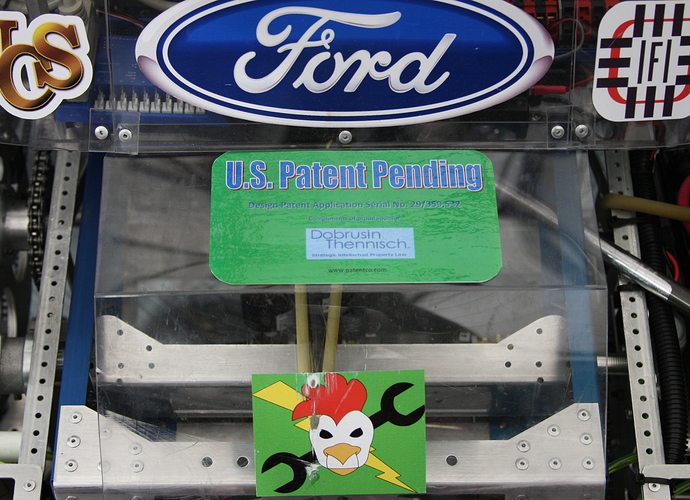 google is so much fun, even if the results aren’t always what they should be

That wouldn’t take 8 years though, would it?

It does say patent pending which means application process. I searched the apps, and didn’t find it yet, but sometimes those take a year or so to before they can be found in the public domain.

The typical timing I am used to is 2-6 years. 2 for a big company wiht a lot of resources on a realtively uncontested application. Who know how long if there are some hot button claims. My last one required the clamis be re-submittted several times. Each resubmition seems to add on 6-months to a year.

148 also had one of these on their robot. I believe it might be for their drive system.

That wouldn’t take 8 years though, would it?

That patent appears to still be pending. http://appft1.uspto.gov/netacgi/nph-Parser?Sect1=PTO2&Sect2=HITOFF&p=1&u=%2Fnetahtml%2FPTO%2Fsearch-bool.html&r=6&f=G&l=50&co1=AND&d=PG01&s1=copioli.IN.&OS=IN/copioli&RS=IN/copioli

I believe 217 and 148 co-patented the overall design of their robot(s) this year. They had a write-up about it in their daily newsletter in Atlanta.

Yeah, I remember seeing the same newspaper as Collin, and that sounds right.

they developed their drive system sometime this last summer however (according to my Thunderchicken team member resources) and one of the people on the patent list is a former Thunderchicken. He is now one of our mentors for Crevolution #2851 and the last time he was on TC was 2003. Unless he did it in secret, he did not help with this drive train and therefor it has to be something else.

I doubt it was for legal reasons to prevent someone else from using their design.

It was probably because it’s very cool to be able to say you hold a patent and to show the students the process you’d go through, were you in industry.

I think they are patenting a new ranking system for tournaments.

I’m thinking of filing one that is:

Then I’ll donate the license to FIRST, and we’ll go to a first week regional before anyone notices the gaping flaw in the system. :rolleyes:

turns out (after asking my mentor) this thing never actually went through. It was for the thunder chicken drive train back in 2002. It is some crazy awesome crab-drive I think.

If the method was the nonadrive I think the patent is invalid anyway. They can grant you a patent for something but for many methods they grant patents and find out later on that it was invalid to begin with. Which if it is the nonadrive I believe it is the case.

For a patent to be valid must be new, non-obvious, and useful or industrially applicable. Useful? I think so. Industrially applicable? Again I’d say yes. Non-obvious? Maybe. New? I don’t think so. I have seen this method multiple times over the years in CAD. It must have been new or obvious to who ever thought up the SpamThingAcon years ago (http://www.chiefdelphi.com/forums/showthread.php?t=38023&highlight=spamthingacon). 343’s omni-drive is another drive system to look at when considering new/non-obvious. The new and non-obvious I am not sure I buy.

Maybe an exercise in the patent process, which is great. Maybe it’s a neat way to display a patent firm’s sponsorship. I wouldn’t be especially worried about using the design in the FIRST arena. I probably wouldn’t go selling these types of systems, not for fear of violating a patent, but financially you could be locked up for years in court even if you are right and the patent is indeed invalid.

Your team was probably correct, unless it was a new, non-obvious wheel I’d think the patent wasn’t worth it.

If you look closely at the label, you’ll see that it is a “Design Patent”.

This is significantly different from a “Patent” as it does not actually require invention.

Wikipedia sums it up well, “In the United States, a design patent is a patent granted on the ornamental design of a functional item.”

First of all, this is really cool. We have been wanting to patent something on our robot for a long time, however it seems like it would turn out too exspensive for us.

I do have one question about the design of the nona-drive. If this was designed over the summer, was it originally designed for just 1 cim per side?

I do have one question about the design of the nona-drive. If this was designed over the summer, was it originally designed for just 1 cim per side?

Just wondering, what makes you think that is the case?

This is the first year we were allowed 5 total cims (right?).
Either they planned for 2 cims each side, then a fp or 2 on the 9th wheel.
Or 1 cim per side, with the third on the 9th wheel, and a free cim.
Or any combination.

Or maybe they didn’t design it over the summer, which is what I think Chris was asking you about.

As soon as you submit a patent application to the PTO, you can say, “Patent Pending” if they don’t just throw it out right away. So, if they designed it during build and submitted a patent application at some point during build, there should have been plenty of time for the PTO to say “We don’t see anything that would cause immediate rejection, here’s your number, please be patient as we examine it closely”. Then all you need to do is apply the sticker.