pic: Too much Mech 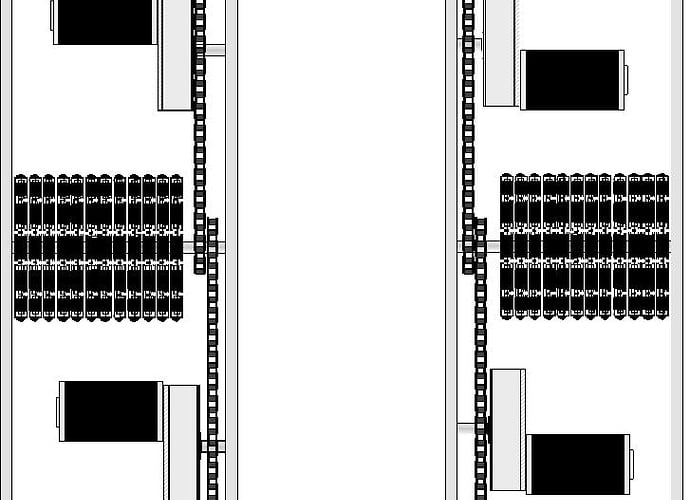 Too much mechanum wheels but what a fun idea. Is this more traction or a loss of power? (ball differential at the center omni wheels).
swamp_child January 1, 2019, 1:42am #2

I don’t get this at all.

I do. There are pictures of a prototype in CD-Media. The basic idea is that you can have 6 wheels on the floor, even when climbing a ramp (put a hinge point at the center axle), but still go any direction you want to.

Wait–is that 3 mecanums side-by-side in each corner? Which would make it 6 omnis per side in the middle…

I think that we need a slight physics review here. More surface area, in theory, does not equal more friction, and therefore more traction. There are reasons for more surface area in areas such as drag racing when using rubber tires, but very few of those conditions apply in a FRC match.

You’d need to tune the wheels in each corner to have identical traction characteristics, which is in fact doable, but it takes a while. Otherwise, you’re likely to get interference while going sideways, which can throw you off a bit.

Allow me to politely inquire… Why?

I think that we need a slight physics review here. More surface area, in theory, does not equal more friction, and therefore more traction. There are reasons for more surface area in areas such as drag racing when using rubber tires, but very few of those conditions apply in a FRC match.

There are some pretty interesting dynamics occurring between wheel tread and a floor surface in FRC. Yes “theoretically” more surface area =/= more traction, however when you are dealing with surfaces interlocking (ie: velcro) it is a different scenario. When we use tread that has “teeth” in FRC,you gain some of this effect, obviously not like velcro, but its still something to be accounted for.

We actualy build our mechanum wheels using ruber stoppers and bolts for axels. It really cuts down on the price. We also use rubber tubing for the omni wheels. The rubber stoppers really have good traction on the carpet.

I would say that it would be an addition of traction on carpet if the corners had paired mecanums. The pairs would be aligned with a slight offset in order to fill each others’ gaps more effectively, much like the way one offsets a pair of omni wheels that are bolted together. I believe a pair of mecanums is still wide enough to allow you to mount the CIMs the same way as well, so you’d still have the same space-saving design as seen above.

Three mecanums side by side is a power loss unless the surface has small bumps that are very close together (like diamond plate). In a bumpy case, it’s difficult to predict angle and surface area of contact, so more is probably better to assure the bot gets full traction.

This is still a fun design to ponder, even if some of its iterations are impractical on the FRC field.