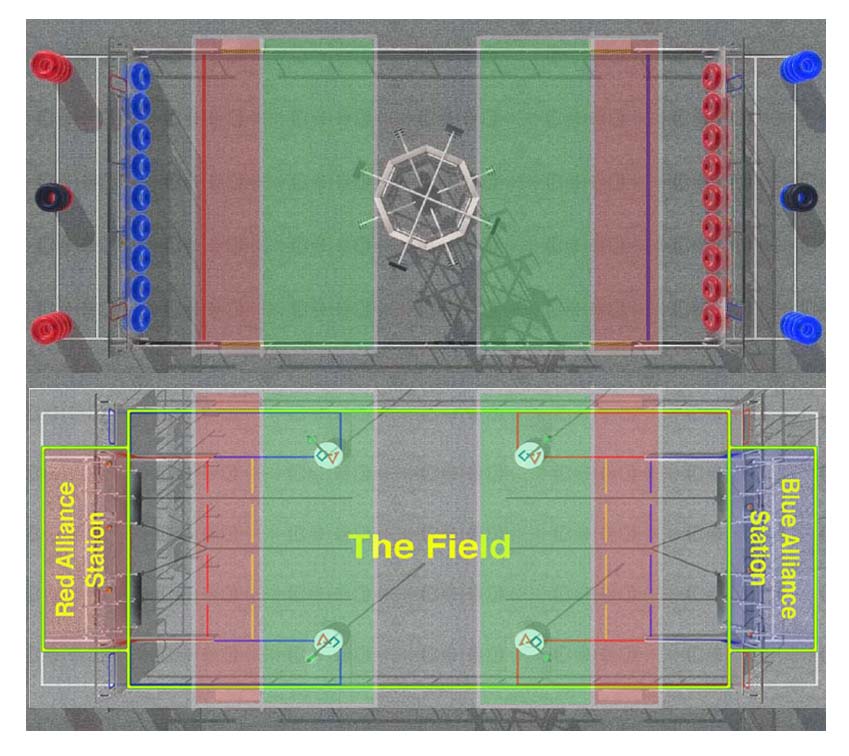 After looking at a ton of 2007 videos on Blue Alliance, I made this easy Comparison image to show where tubes would most likely go, however the data I’m sure will be askew as this year, the idea is to get the tubes as far as possible, not just in the area.

The faded area in Red is where most all the tubes that weren’t deliberately dropped had fallen, though it is an average. I have seen about 10 human players (usually same team stuff) hit the rack. I’m sure getting that kind of distance will be more the target then 2007.

The Green zone is where the majority of the thrown tubes that had some kind of lift had fallen and laid to rest. No tube really made it to half court, which is important as plenty of ringers were laid to rest at the edge of the green area as I marked.

I’m sure this is common and obvious knowledge, but having it in a visual sense is stunning to see that throwing any tube will have to be done inside your little zone, or else an opponent is going to snatch it easily.

Thanks for posting this, interesting to see. Several of our team mates have been able to throw the triangle nearly across the field (double over-hand). Our main concern is that it often ends up leveling out and veering off to the sides. This is TERRIBLE, considering that the refs put the pieces back in play, near where they came out. This means, we just put them in the opponent’s lane. :mad:

Please post any ideas or concepts regarding throwing that was observed in '07, I’m all ears!

I don’t foresee much throwing this year. My reason is this: both teams use the same game pieces; if you throw pieces (unless you throw pass half court) you are basically placing pieces for the opposing alliance to pick up. In 2007 there were red and blue pieces making throwing practical. At most, human players may drop tubes into the lanes for robots to pick up.

The problem I see is that in 07, most teams did not try to huck their tubes across the field. If the human players were gunning for the rack, they would go a little farther, but as for lobbing a tube the full field length, it wasn’t really a strategy many teams attempted.

Most teams just went with the simple drop the tubes out in front of your driver station somewhere between the rack and your home zone and come back to pick them up.

You can see that many of the tubes hit the rack with some height left, the one scored was on a middle spider. The ones that went the farthest bounced and rolled which probably isn’t something to count on.

Our team plans to do some tube throwing tests and then figure out the time it will take our robot to make the trip from the tube’s landing spot to the rack, allowing time for pickup and hanging. We then have a rough estimate of how many tubes we could score using this method in a match, under ideal conditions.

It remains to be seen if, with 5 other robots occupying the field, it would be more efficient and reliable to toss the tube part of the way or have the robot receive it from the feeder and cross the entire field itself.

And any time I talk about tube throwing I have to mention that one time in the 07 Monty Madness finals when a human player flung one onto the rack with about 5 seconds left on the clock. The place went crazy.

You can see that many of the tubes hit the rack with some height left, the one scored was on a middle spider. The ones that went the farthest bounced and rolled which probably isn’t something to count on.

Good example of some tube huckin’!

It seems like most of the tubes hitting the rack would easily clear midfield if the rack were not there.

Thanks for posting this, it’s great! I will be sure to share this with the team tonight.

Just a side question for those of you testing throws. Which shape gets the greatest distance? Which is the easiest to aim? I have my suspicions but would be interested to hear what others have found.

As I said, I’m sure this year is going to be very different as the object is to get the tubes as far as possible whereas in 2007 it was simply to have the tubes out there for robots to pick up.

But I’m glad I did this, as it’s a good mental image as to the need to really get those tubes flying, and I’m sure human players will be doing all they can to get the tubes as far as possible.

Another thing I didn’t think of until I saw this, is how much in-the-way those Towers are for throwers.

Yeah the poles are definitely going to inhibit some throwing this year. It seems most of the aim would have to be basically at the center of the field, or slightly further based on the locations you need to throw them from.

Thanks for posting this though! I enjoy the simple visual comparison. It will be interesting to see how the tubes throw this year as they seem to have several differences from 2007’s… specifically the shape of course.

To any/all of you who continue experimenting with this year’s tubes (from behind a legit driver-station mock-up, and with mini-bot poles in the way), I would love to see any sort of rough sketches of where they land compared to where you aim them.

I am developing the human player simulation software for this season’s 5th Gear match simulator quite literally right now; and I need to come up with a simple but good-enough model for the sort of accuracy and distance we will give our simulated humans.

I would also love to get some measurements of how long it typically takes after a driver/robot/anlyst requests one, to find and then release a correct tube. For thrown tubes I’m also curious how long they stay in the air after they are released, and how far they bounce/skid/roll.

Sophisticated measurements are great and might indicate that you have a bright future. Back of the napkin is great to get too, and might even indicate a brighter future.

I threw a circle one over 40 feet on the first day.
I do play frisbee and threw it like a backhand though, and am tall enough to backhand it over the barrier…

All tubes were thrown double-overhand, meaning the tube was vertical and spinning as it was thrown. Some practice yielded throws accurate enough to at least remain on the playing field.

Circles were the easiest to throw and remained the most stable in flight. 35 feet in the air was trivial, and they continued to roll the rest of the field most of the time.

Squares also flew 35 feet, but did not roll as far as circles, ending at about 45 feet on average. The squares roll better than you’d think a square would.

Triangles were the most variable. With the right landing, they went as far as squares, but hit the ground just right (wrong?) and they bounce backwards a little and stop.

Since I was a Human Player in 2007 I decided to Play around with throwing some tubes this weekend after seeing Tetraman’s picture, and I came to similar conclusions as Don Rotolo.

We were able to throw all of the tubes relatively consistently using a sort of Sidearm inspired throw - same way many HP’s threw in 2007 - they all seemed to land within the same 5 foot radius and all traveled about 30-35ft. The Circle and Square were the easiest for us to throw as they flew essentially the same. We found that the Triangle liked to be gripped on one of the points for the most consistent throws. As far as characteristics upon landing go, we didn’t really care much about these as we were throwing them in a room with a waxed concrete floor - we’ll try and revisit this once our practice field is up and we’ve got some carpet to play with.

That being said, I think we’re going to teach our Human Player how to throw tubes should they need to, and I’d suggest other teams do the same. I’d be a bit leery about throwing a tube in a match though - unless of course there was some good reason for doing so.

Thanks for the Tube throwing info guys!, and thanks in advance to anyone who posts in the future. Please keep the results flowing.

Once we get 5th Gear deployed for this season, you will be able to experiment with its simulated robots and driver interface; plus it’s tube holding (in the wall slot), dropping (through the wall slot) or throwing over the barrier simulation.

Reality is a tough thing to simulate (so take what we simulate with a grain of salt), but I think 5G will once again be good enough to offer some decent multi-player strategic insights, scouting practice, etc.