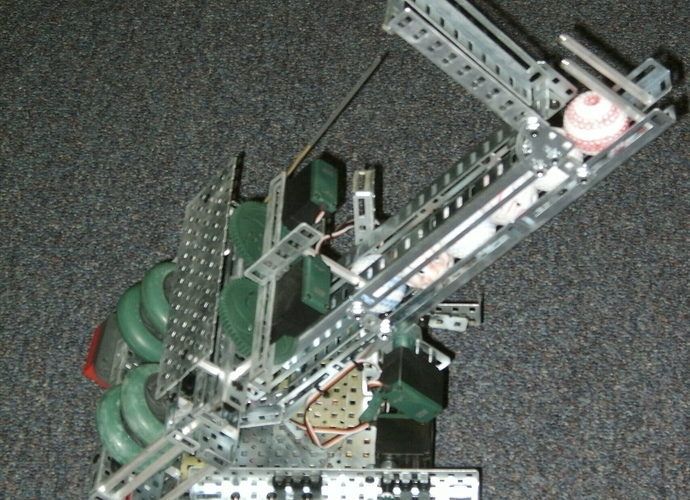 This looks nice–very clean design. It kinda reminds me of 1501’s robot from this season, if you let your eyes blur a bit.

How do you index the balls (or do you)?

how far can it shoot the balls

Cool! Do you have a video of it shooting?

This robot was dismantled a looong time ago.

If I remember correctly, it shot the balls about 15 feet, but it was capable of shooting in bursts of three or four at a time. If anyone is looking for some fun ammunition for their vex robots, I highly recomend golf wiffle balls!

(sorry, but to my knowlege we never got a video of it)

That looks awesome! Exactly the type of thing I want to build. What did you use to build that? Obviously a tank tread kit, but what else did you use? And did it have a pick-up system, or did you have to manually load them?

What did you use to build that? Obviously a tank tread kit, but what else did you use? And did it have a pick-up system, or did you have to manually load them?

This robot was pretty much the result of having loads of extra parts lying around and a bit of free time. At one of our vex summer camps for elementry schoolers, some of the older team members decided to play around with the leftover pieces from a couple of unused sets. What to build with all of these pieces? A shooter, of course!

It is mainly just a construction of standard vex L-beams and a bunch of standoffs. Each set of wheels in the shooter is run by one motor, geared 25:1 if I remember correctly. After this contraption was built, we decided to stick it on Mr. Heller’s tank tread robot that he was showing off. (grown-ups can play with robots, too!) It couldn’t pick up off the floor, though we tried, but it could hold quite a few balls after we added a basket on the top. It regulated the flow of balls with an arm attatched servo.

I hope that answers most of your questions. I guess we really should have taken a video of it before we ripped it apart!