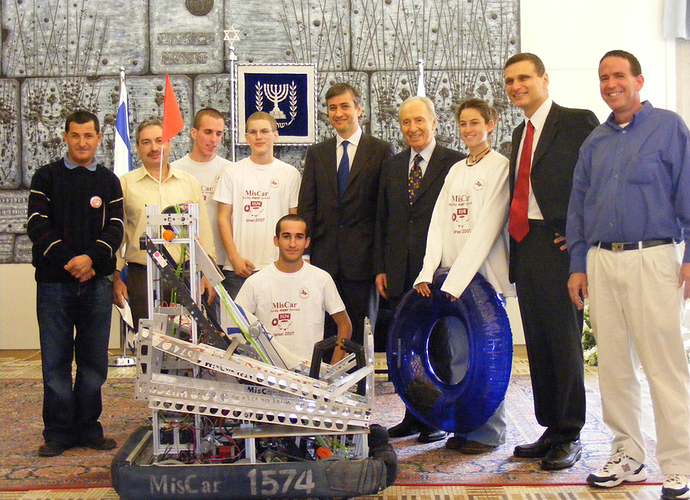 Today we were invited to the president’s residency in Jerusalem to demonstrate our robot. In the meeting were presenting Jean-Philippe Courtois(in the middle), Microsoft International President, Danny Yamin, the CEO of Microsoft Israel(to the right), and of course Shimon Peres, The Israeli President.

In the meeting it was officialy announced the Microsoft will be the main sponsor of the Israeli Regional.

What an awesome opportunity for you all. Congratulations on this meeting! How did it go? Did he drive the robot? How was the security?

The president did not get the chance of driving it. I don’t know if you’re aware of it, but he is almost 85 years old! (and still working 18 hours a day).
The security was not so bad, and it all went quite smoothly actually.

This is a great picture, and some well-earned recognition for your team.

I thought 1574 was one of the inspirational highlights of the 2007 Championship. Your enthusiasm on Newton is among my most vivid championship memories.

This is a great picture, and some well-earned recognition for your team.

I thought 1574 was one of the inspirational highlights of the 2007 Championship. Your enthusiasm on Newton is among my most vivid championship memories.

Peres attended the 2007 Regional in Israel. He was one of the speakers in the opening ceremony. Since he was elected president he has been promoting technology and science, and FIRST is one of the project which he wishes to develop.

This is an awesome picture, and I’m sure that it must’ve been an exciting time for you all. Inspiring photo, really. Kudos!

What an honor and a great photo!

Wow! How cool is that? That is one awesome photo, and even more awesome is what it represents for FIRST and the people of Israel.

Good job Miscar!
I think FIRST Israel is finally starting to get the recognition in deserves.

The program that was initiated by president Peres and Microsoft looks very promising (even though I am skeptical at this point). Hopefully things will start moving now that there is funding from a huge corporation like Microsoft, rather than the government and ministry of education which are affected by foolish political decisions and greedy individuals who prevented programs like FIRST from getting funding in previous years.

I hope the Israeli teams aren’t affected too badly by the ongoing strikein the Israeli high schools and universities. This is a huge issue and I hope it will be resolved soon, otherwise we may see programs like this and others disappear.

Looking forward to working with all of you again this year!

You no doubt merit that recognition and respect.
Keep going !

Congratulations!!!
What a wonderful moment for your team.

http://www.jpost.com/servlet/Satellite?cid=1195546765114&pagename=JPost%2FJPArticle%2FShowFull
The Jerusalem Post -the israeli newspaper in English, writes:

Software giant Microsoft Corp. has entered into a cooperative technological training project with the state of Israel expected to provide some 250,000 Israeli women, youth and disabled people with a springboard to a career in science and technology related industries.

“You have a good company so we’re happy to do business with you,” said President Shimon Peres at the ceremony launch the project on Thursday at Beit Hanassi.

Jean-Philippe Courtois, President of Microsoft International, said it was no coincidence, that the global software company Microsft had chosen to work with Israel, adding that the country had the technological vision to open up new horizons. “Microsoft sees Israel as being a specialist country in innovation and creativity, leading the world in technological initiative. Moreover, Israel is regarded as one of three major technologically progressive countries outside of the US,”, said Courtois.

“Technology is what literacy used to be,” said Courtois.

Microsoft seeks to encourage young people to be science and technology leaders by involving them in programs and projects that help to develop the skills that could lead to innovative ideas and products.

Peres added that he was pleased with the attention that Microsft was giving to women.

“In a country like Israel this was especially important, because there is a large religious community in which women are the breadwinners so that their husbands can continue their studies,” said Peres. “If they can work with computers, they can do so in an environment that does not compromise their sensitivities.”

“The Arabs will never enjoy equality unless they enter the world of high tech,” he said.

They meant the FRC (and hopefully the FLL) comeptiton.
Will be fishing for better articles of this in English, stay tuned. :]

oh man…That’s awesome!
Do you have any mroe details on the “sponsering” that Microsoft is going to be providing.
Will it be for individual teams or the event as a whole?

oh man…That’s awesome!
Do you have any mroe details on the “sponsering” that Microsoft is going to be providing.
Will it be for individual teams or the event as a whole?

As far as I know, they’ll be sponsoring the entire Regional and not any specific team.

Has anyone watched yesterday’s Mabat news cast on channel 1?

They did tell about Microsoft getting involved and Shimon Peres launching a new program to attract people to engineering through participation in FIRST.
Moreover, they mentioned some scholarship opportunities to overachieving participants.
Anyone knows anything about that ?

Guy – thanks for posting the photo and congratulations to your team for their representation of FIRST to the Israeli President!

To all of the FIRSTers in Israel who take the time to post on CD – Guy, Nir, Liron, Feliks, David and others: Thanks for reminding us how small the world really is!

(and thanks for finding the English versions of your news articles to read!! :] )

To help round out this great thread, here is the link of President Peres speaking at the Tel Aviv Regional this year… http://corpvideofs.adpcorp.com/video/jw/peres_400kb.wmv