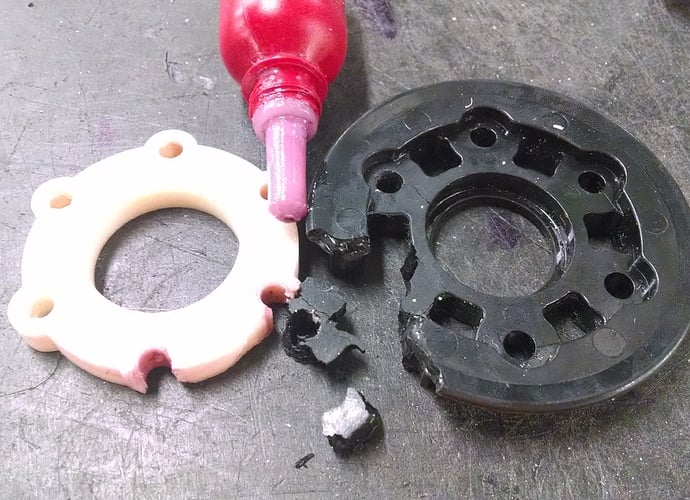 We are bolting these AM pulleys to performance wheels with a 3D printed spacer between them. The bolts started to rattle loose so we put Loctite on and put them back in. Some of it touched the spacer and the pulley in the process, within minutes they were crumbling in my hand.

I searched and this problem had been pointed out on here in the past but I thought I would bring it up again because I hadn’t heard of it before and with the surge of 3D printed parts on robots this year more people might like to know.

I can’t speak to ABS, but we’ve used Loctite dozens of times with screws in tapped polycarbonate without any issues. Perhaps the specific kind of Loctite or polycarbonate you’re using is more susceptible to problems?

I can’t speak to ABS, but we’ve used Loctite dozens of times with screws in tapped polycarbonate without any issues. Perhaps the specific kind of Loctite or polycarbonate you’re using is more susceptible to problems?

Here’s the previous post Nathan was talking about, I believe. I assume it’s the specific type of plastic AndyMark uses with that certain type of Loctite.
http://www.chiefdelphi.com/media/photos/37661

Acetone (the solvent used in a lot of thread locking compounds) dissolves ABS plastic. A lot of 3D model makers will use it to smooth out their creations as it can eat the plastic.

If it helps “Loctite 222MS” was what caused what is pictured, that has since run out and we switched to Loctite 242, I can test some of that on the broken part and see if it reacts differently.

If it helps “Loctite 222MS” was what caused what is pictured, that has since run out and we switched to Loctite 242, I can test some of that on the broken part and see if it reacts differently.

I wouldn’t recommend it, the following is taken from http://www.loctiteproducts.com/p/t_lkr_blue/overview/Loctite-Threadlocker-Blue-242.htm

I wouldn’t recommend it, the following is taken from http://www.loctiteproducts.com/p/t_lkr_blue/overview/Loctite-Threadlocker-Blue-242.htm

We found a way to apply it so it won’t touch the plastic which only has clearance holes. (we assumed they were both bad for plastic)

If you need to use thread-locker on plastic parts such as PC or ABS, it’s better to buy screws that have a nylon lock patch already installed, as this will not dissolve the plastic.

McMaster-Carr is the complete source for your plant with over 580,000 products. 98% of products ordered ship from stock and deliver same or next day.

You might want to try Loctite 425 Assure Plastic Fastener Blue Threadlocker or Permatex 19920 Plastic Threadlocker. I have not personally tried these, but they are made for plastic.

From the loctite website:
Threadlockers are a single component anaerobic adhesive comprised of unique liquid resins that harden (or cure) to a durable solid when exposed to metal ions in the absence of air. The anaerobic cure mechanism allows the adhesive to flow and evenly settle to lock and seal threaded fasteners without curing permanently. Any excess threadlocker will remain liquid, and is easily wiped away from the assembly.

I took a workshop on loctite adhesives once. Note that Loctite makes many types of adhesives, not just the threadlockers we normally identify them with. One thing they emphasized in the training is that anaerobic adhesives are not compatible with most plastics, and polycarbonate is especially vulnerable. An interesting fact is that the red plastic bottles they use for most of their threadlockers is microscopically vapor porous, like an eggshell or goretex. This prevents the threadlocker from curing in the bottle.

Loctite does make a threadlocker specifically for plastic parts and plastic fasteners. It’s Loctite 425. This is cyanoacrylate (superglue) based, rather than anaerobic. Cyanoacrylates cure in the presence of water vapor. So this stuff comes in a bottle designed to keep air out, rather than allowing it in.

The workshop was really cool. They had all sorts of fun little demos that showed how the various products worked. One of these was a demo of the green product used to lock slip fit cylindrical parts. They gave us a collar and a piece of shaft. You put a drop of the adhesive on the joint and immediately started moving it back and forth, preventing the polymeric bonds from forming. As long as you kept moving the joint, it stayed liquid. If you stopped for a second, the adhesive would harden instantly.