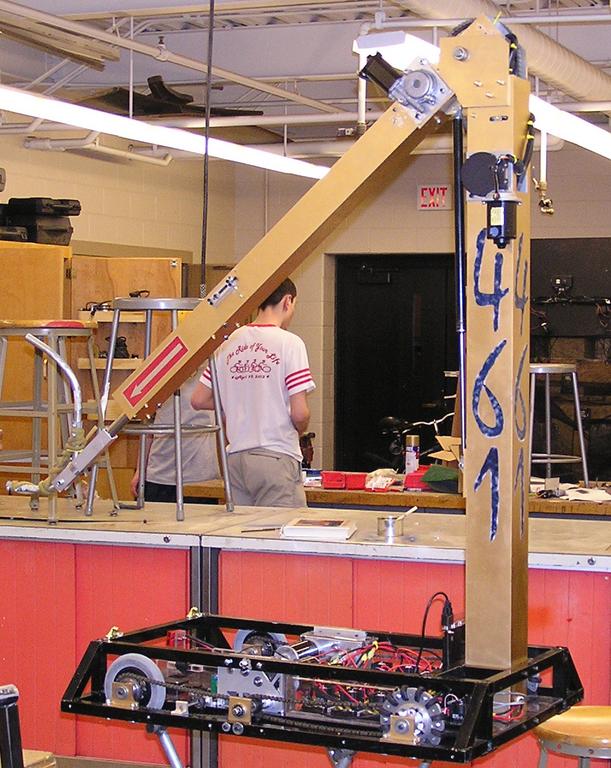 Here is another picture of the robot from another angle. A little more detail and a little less flashy photoshop stuff then the last one.

the gripper on there is one of the more ghetto designs we have come up with, the tetra gripper is modular and we have a couple we have designed and are planning on testing.

The arm is nice, but that is One Cool Chassis (as long as you clean up that wiring soon…). I think I even figured out why the omnis are on the rear instead of the front. You should be proud.

as long as you clean up that wiring soon…

No matter how hard we try, messy wiring is the one thing that seems to plague this team. It always looks good for about six hours after completion, at which point we invariably need to relocate every single PWM and sensor. At least we have some lexan® shielding to go over all of that.

Thanks for the props

The wiring has been cleaned up some since that picture was taken, but then we added more wires, and then we took some out, and then added some back in, ooo the life of the electronics team:)

I promise it will look cooler in person then those pictures portray it as, and the side panels are looking super clean this year as well and those aren’t pictured.

i love the combination of omniwheels and standards. pretty clever, i bet it handles like a dream.

ooo god yes it does. The first time i got a chance to get my hands on the controls i was doing all sorts of crazy stuff with it, makes me yearn for the days of being a driver again…
Its highly maneuverible, and the drive is really fast/strong.

I admire your use of square tubing to create a clean look.

Is the arrow decorative or functional?

honestly, i wish i knew why that arrow was on there, but i dont, so i cant tell you.

honestly, i wish i knew why that arrow was on there, but i dont, so i cant tell you.

Dance Dance Revolution is the only solution.

That rhymed. I should not be on chief at this hour of the morning. >_<

the arrow is on there because it was very late at night and we were like…“teehee, which way does the arm extend? THAT WAY! ARROWED!”

that’s it, pretty much.