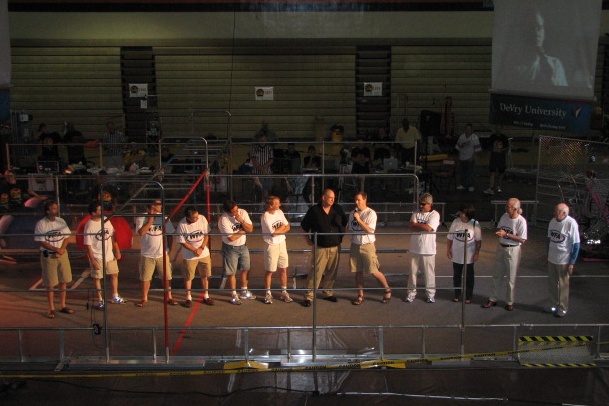 (Kyle Hughes and Rob Mainieri could not attend)

It was great to be a part of Mission Mayhem 2008. There were many wonderful moments including this one. What you are seeing is everyone introduce each other. They stood in chronological order of the year they became Woodie Flowers Award winners and watching them introduce each other and then pass the mic for the next introduction was a goosebumper. Also, the excitement they generated in the crowd put smiles on everyone’s faces, after they picked their jaws up off the floor.

Actually, Arefin had to pick his whole self off the floor when they entered the venue.

It was great fun watching some of them mingle with the teams while others participated as guest MCs and announcers for a little while. Great great fun and so very inspiring.

The teams were great, asking politely to have their pictures taken with their heroes and being patient while waiting, all the while - a very exciting competition was taking place.

A thank you to Andy Baker, whose idea this was, for making this a moment to remember for everyone present at Mission Mayhem. I’m just sorry not everyone could see this. You, too, would have had a jaw-dropping experience!

Those were some pretty neat WFA tee shirts, guys!

A thank you to Andy Baker, whose idea this was, for making this a moment to remember for everyone present at Mission Mayhem.

The thanks really goes to Dr. William Murphy, who invited us for a working weekend at his house in Miami. Dr. Murphy is positioned at the far right of the picture above. Without his hospitality and his creation of the Woodie Flowers Award in 1996, none of this would happen.

We were only at Mission Mayhem a short time, but it was great to see some friends and make new ones. Thanks to David Ellich, David Guzman, and Jane for helping us create this surprise.

Seeing and getting to meet Woodie was awesome, i was shocked when he showed up, I really was.

Now this is just plain cool. I feel so lucky to know (or at least have met) 9 out of 12 of these awesome people pictured here.

I would like to thank Andy and Mr. E for planing this, and all the other WFA winners.

Thank you for taking the time to come to Mission Mayhem. You have all made this year’s event unforgettable for many of us.

The surprise came out perfect, rumor has it Arefin was almost in tears. :yikes:

When I saw these 12 inspiring people standing right infront of me all together, I thought I was dreaming. When I got the reality check, I felt tears in my eyes. There have been only twice when tears came to my eyes with joy in my involvment of FIRST.

Thank you so much for making this day unforgettable for me.

Dave, you know I usually don’t like surprises. But man, this one was the best one ever. Thank you to David Ellich and Dave Guzman for organizing this with Andy Baker.

From now on, if Andy tells me that he will not make it to Mission Mayhem, I will think twice. :rolleyes:

I think Jane Young can vouch for this one I was like a bright eyed kid on christmas morning when these wfas and Dr. Murphy and Dr. Flowers came through the door. Thanks to all of them for taking the time out to stop by at Mayhem. Also Dave Guzman next time something like this happens and you don’t tell me make sure I am sitting down. Finally thank you to Sarah for posting this picture.

I think Jane Young can vouch for this one I was like a bright eyed kid on christmas morning when these wfas and Dr. Murphy and Dr. Flowers came through the door.

Actually, truth be known Drew, I pointed you out to Dave Verbrugge as ‘the bright eyed kid on Christmas morning.’

What I suggested was that the impact that he and his fellow WFAs, Dr. Flowers, and Dr. Murphy have had and continue to have on students and college mentors is something that is very deeply felt but can’t always be expressed as well as one would like. So, indeed, I can vouch.