pic: When You're Finally Better Than 118 At Something... 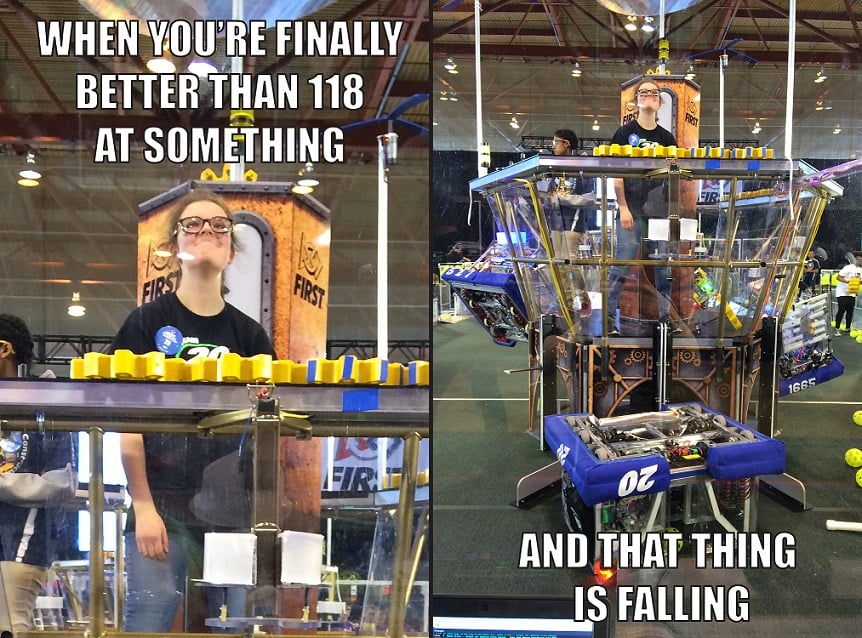 05 is personally my favorite team of all time.

I personally am better than 118 at something. Losing to 118!

Just some quick background notes on the picture here. This was actually the second time we fell on practice day at HVR, after experiencing some failures with the davits being too sharp and shearing our rope. We fixed the problem by putting some webbed sheathing over the rope thanks to the wonderful people on 303 who lent us some. However, after both of our falls, we were pleased to find that there was nothing wrong with the robot, and continued on to play back to back practice matches with no problems.

We got many looks of surprise for rolling the robot just to the other side of the field instead of taking it back to the pit!

That is pretty much the verification test for shipping with UPS.

That is pretty much the verification test for shipping with UPS.

That made my day!

Yes, I will say having a roll cage has been the BEST thing we have ever done. Saved our robot from several falls this year.

Just one more team to get this year’s Triple Tortuga?

For reference, the last time we could reasonably state that our robot was better than 118 at any aspect of the game was in 2014. We could catch and HP in-bound better than just about any team out there (which came at the cost of pesky fouls for possessing an opponent’s ball, even when tossed directly in by an opposing human player -_-). Of course, falling off the davit in 2017 isn’t a tremendously desirable thing to prove you’re GOOD at, and those of us who were around all know how ever-useful catching was in 2014. But doing something that well once every 3 years? We’ll take it.

When we saw this photo, we just couldn’t contain ourselves. The look on our pilot’s face was priceless. Shout-out to Isabel for being an outstanding sport and pilot. Speaking of pilot skills…she’s pretty incredible on the airship. She even developed this technique for accommodating multiple simultaneous passive gear deliveries by lifting 2 strings at once :ahh: . Definitely made a difference in this 4 rotor match at Hudson Valley last weekend:

Teams like 118 set such a high bar year in and year out. Thank you for the inspiration. It’s unfortunate that the championsplit means we won’t get to see your robot up close this spring.