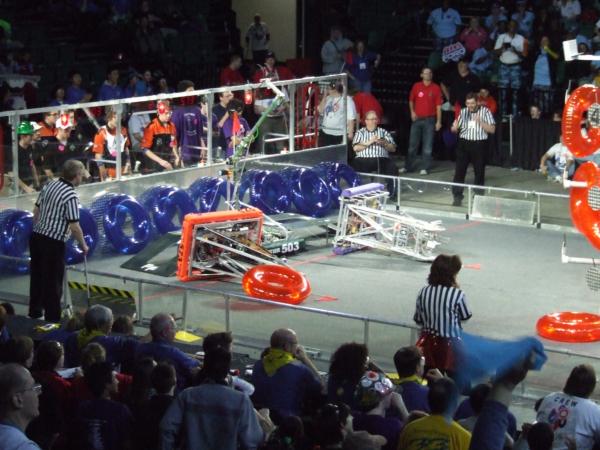 that just sucks! but the arm is above the alliance station, they called that once at vcu, even though it happened more than that one time.

WOW, was there any particular reason, or was it just bad luck that they both fell off the same time?

WOW, was there any particular reason, or was it just bad luck that they both fell off the same time?

They both had one side over the edge of the ramp… and thus, one by one, gravity bit them and took them down…

Awww! Part of my is crying and part of me is laughing hysterically. I hated it when a robot would fall off our ramps.

Guard rails for the win.

i was there when it happened and i found it hilarious

This was one of the most elegant times I have ever seena robot fall off a ramp, they both fell off almost at the same tims, just about a few sceonds sepertaing them, it was a tense match to eatch and got the crowd wild

Lots of teams don’t think when they build their robot. If they actually thought about the game they would realize that you should have guide rails because it gets crazy.

whewn i looked at there robot i thought all i could see is just a plywood ramp, i didnt see anything that looked like a guard rail,

I guess te trick to ramps is try to have a much wider ramp, like about 4ft wide

Yeah I was driving the arm. Straight up bad luck. And hurry. This was in semifinals I think, and while it sucked because we would have won, it turned out ok and is pretty funny now.

Guard rails for the win.

Actually, guard rails are over-rated. In 2001 we had guard rails and we were 4 ft wide. Some robots could still manage to climb over the guard rail and get stuck. Others that had low clearance could catch their frame on the rail and it would lift their wheels off the ramp so they were no longer making contact and then they would get stuck also. So, the only way to have fool-proof guard rails is to make them taller than any robot’s clearance. Even then, if they do not line up properly to start up the ramp, they can ride up the guard rail and really get stuck.

Like I said to begin with, drivers need to practice driving their robot straight up a ramp.

I saw that match and was just…wow… I was kinda worried because most people probably did not design their robot to with stand something like that.

Pretty funny pic there. I’d be so dissapointed if I was on that alliance when that happened though.

My team’s robot has a ramp built into the chassis. It’s kind of like a rectangle made of two trianges so we hinged a corner and it unfolds to be a ramp.
i’ll see if I can draw it with text

Anyway, using the arm to push it up, we can deploy it and then using two little lifter leg things, we can raise it to a horizontal position 14 inches above the playing feild.
At first, it was too narrow for other robots to climb, so we added a bungee system so that the bottom two plates would flair outwards a little when it opened and give the robots more room to drive.

Wish I had a picture, I guess i’ll be posting one as soon as we get the robot back. Hope you understood at least a bit of that!

And given the noted increase in teams struggling to complete inspections on Thursday, how many teams do you think get enough time to execute that practice? It’s a good suggestion, but how many get a chance to effectively prepare before their first event?

Especially early on in the season, I start out assuming no one knows how to drive on flat ground, let alone up a ramp. That doesn’t even factor in the actual ability of the robot to drive straight in the first place. Adding extra insurance to guard against robots “falling off the cliff” only helps give confidence to the inexperienced and increase the chances of success. I’d rather have a robot get caught on the rails than falling off the edge and damaging themselves (or falling into a critical area of our robot and damaging us).

The reason why our ramps do not have guardrails was a weight issue; we were heavily considering putting them in. However, they’re 4 feet wide, so we figured it wouldn’t be too much of a problem.

Also, they’re made of fiberglass with a honeycomb aluminum core, not plywood

It was just terrible luck. But very funny in retrospect.

I was in the stands watching when that happened… it was interesting to say the least. I hope none of the robots were significantly damaged…

We actually did have some small guard rails, but they still left a lot to driver skill.
Props to all the drivers that made it up any ramps this year! Threading a needle with a robot is a difficult task, no matter what ramp you’re climbing!