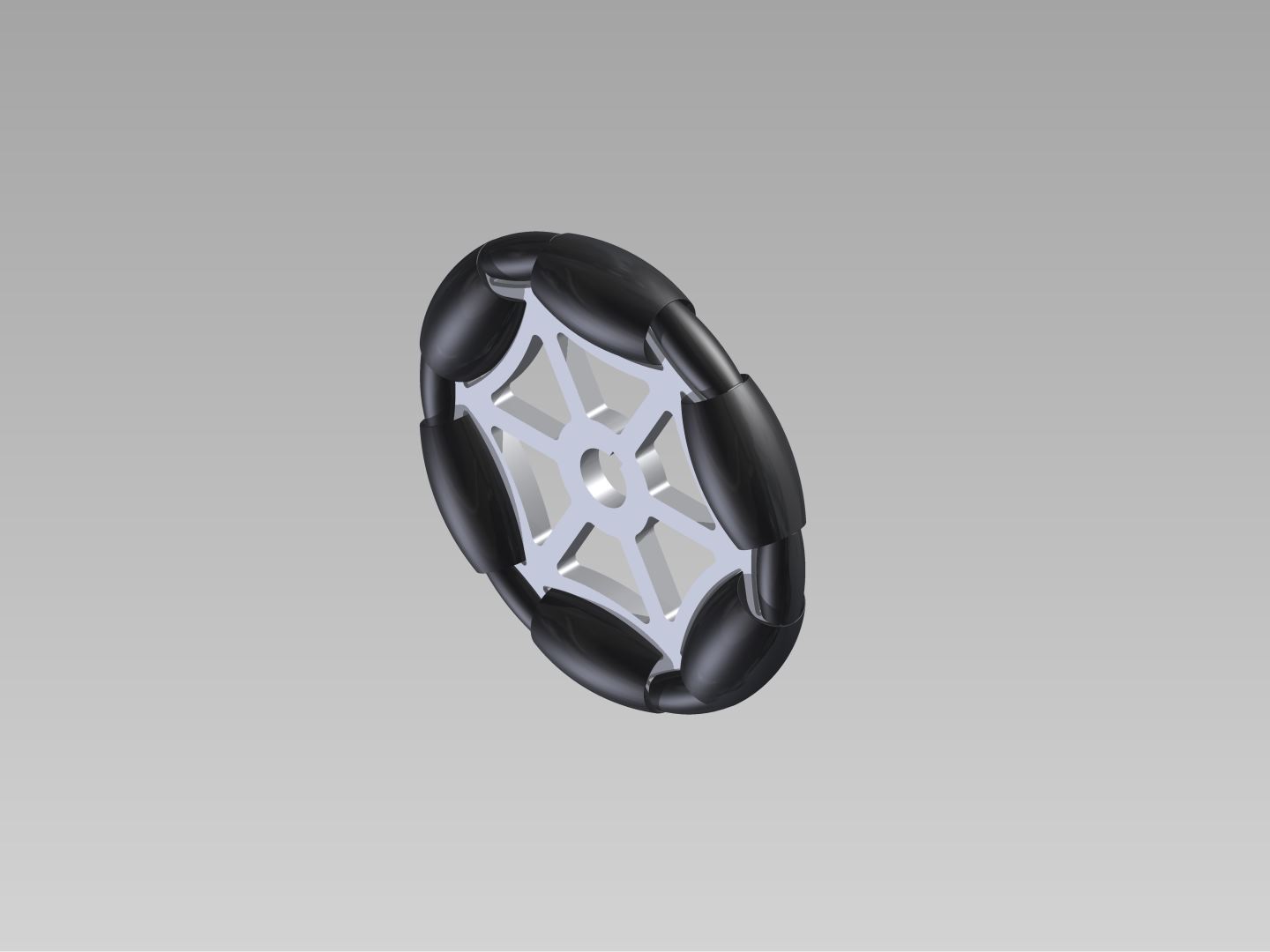 Working on a non FRC project I ran into an omni wheel that looked something like this. I can think of several advantages and disadvantages, to using them. I decided to post this here so that people could discuss why wheels like this should or shouldn’t be used in FRC. Thanks in advance for any input.

Do you mean with larger rollers? Because AndyMark recently came out with the Duraomni wheels.

I think he means having bigger and smaller rollers that roll more or less inside each other, thus creating an omniwheel without any “bounce”

I think he means having bigger and smaller rollers that roll more or less inside each other, thus creating an omniwheel without any “bounce”

I have no idea what you’re talking about. Inner rollers? “Bounce”?

The only bounce I can think of is with single omni wheels, as you transfer weight from one roller to the next. Even then, the gaps are small enough that you should never significantly lose traction on carpet or similar surfaces. Duallies smooth right through this. The AndyMark DuraOmni (which only has four rollers for each half), is only available as a dualie.

From the picture, it looks like the frame actually sticks inside the large roller in order to support the end of the small one - in other words, the ends of the large rollers are completely hollow. Make the rollers out of a hard plastic, and I can’t see them being easily replaceable should a roller break. Make them out of anything softer/more flexible to let them be easily replaceable, and I don’t think they’ll stand up to our uses.

The more traditional Omni wheels, on the other hand, do have replaceable rollers - we have 2 pairs of omni’s from 2007 that are still running today, although we’ve replaced the rollers on them a couple of times (a very straightforward process).

It appears that not everyone knows what an omni wheel like this is, so I will explain.

Since some seem unfamiliar with the design, as I was until recently, I’ll give some possible pros and cons that haven’t been mentioned to get started.

Question marks expectedly denote things I’m not sure about.

This style omni wheel would be a more challenging to manufacture and assemble, as the outer rollers cover the inner rollers, this is most likely why we do not see them in production currently. As most current omni-wheels are injection molded plastic, the process for molding a wheel of this shape becomes significantly more challenging, due to the angles you see in all of the pins.

A normal injection molding process of a simple part features a 2-part mold. This requires that all faces of the part can be directly accessed by the two faces of the mold.

To mold a wheel like this, you would need several extra moving parts in the mold, thus driving up cost.

Also, due to the shape of the wheel, each roller is, in a sense, cantilevered from the main hub. If you think about the shape of the hub (without the rollers) there is a lot of pressure riding on very little material.

Benefits, however could be a smoother ride when you do not have to deal with the gaps in the standard style omni wheels. In addition, you could achieve a dualie-effect without the space taken up by having 2 wheels side-by-side.

For the sake of cost and simplicity is why I believe that we do not see designs like these already in the FRC market.

That is an interesting design. I would be interested in it, if 1 wheel can support 100 pounds, as having one smooth rolling wheel would likely save space and weight.

Is this out on the market or a design idea?

If I were going to build this, I would give the shorter roller twice the diameter so there is room for the axle. This roller could also have a bow-tie look from the side to reduce the gap with the longer roller.
D

The DuraOmni wheel rollers are designed with a 4" wheel in mind. It is smooth rolling and the overlapping rollers create a true 4" diameter circle when viewed concentric to it’s center bore. The rollers on AndyMark older omni wheel offerings such as the 4" Dualie Plastic Omni Wheel were originally designed for an 8" wheel, and were used on other wheels to save costs. They do roll fairly well in ‘dualie’ setups, but are not as smooth rolling as a DuraOmni. I’ve attached a photo comparison of both.

Another reason why omni wheels like the one you posted aren’t used in FRC is due to the requirement of more than one mold for the rollers. Molds are expensive, and many FRC teams are looking for high quality inexpensive components for their robots.

The DuraOmni wheel rollers are designed with a 4" wheel in mind.

Having never had the opportunity to see a DuraOmni up close and personal, I’m interested in understanding how the axial forces on the DuraOmni rollers are reacted.

Having never had the opportunity to see a DuraOmni up close and personal, I’m interested in understanding how the axial forces on the DuraOmni rollers are reacted.

They use white nylon on the inside of the roller as a bearing surface to handle axial and radial loads.

These rollers are used in the 4" DuraOmni Wheel. Eight of these roller are used to allow the wheel to roll smoothly and omni-directionally.Eight replacement rollers are included in this set. No other hardware is included.

I believe other omni wheels use flanged bronze bushings.

They use white nylon on the inside of the roller as a bearing surface to handle axial and radial loads.

When there’s an axial load, what does that white nylon rub up against (material and shape) ?

Interesting concept indeed! Looks like the large outer rollers would probably have to be molded in two halves, then bonded together. Not impossible, but also not particularly cheap. The real trouble will be with the hollowed-out portion of the larger rollers, because any material soft enough to be grippy will also be soft enough to flex inward and rub against the support inside it. One might perhaps skirt around this issue if the surface it would rub against is replaced with a bearing, however, which would be even more interesting to see.

I’ll take your current design, and raise you an improvement:

Most of your assembly difficulties could be eliminated if, instead of alternating between small and large rollers, you made all of the rollers the same size, but asymmetrical: small on one end, and large on the other end. The small end of each roller would nest inside the large end of the next roller, and so on around the circumference. That way, you only have to solve the interference problem for a single roller instead of all of them, and your production costs would be much lower.

Here’s a quick mock-up cross-sectional view of what I’d suggest:
(it’s missing the roller pins, but you get the point)

The roller profiles and support arms would definitely need some tweaking to make them more structurally sound, and you’d need to work out the assembly process a bit more, but it’s not all that far-fetched to think that this sort of thing could work IRL.

I’ll take your current design, and raise you an improvement.

I definitely like this one better. At first, I was worried about the variable distance from the pin to the roller, but then I realized that this is also a problem with the DuraOmni, or any omni with fewer than a couple dozen rollers. I can easily imagine how to have the wheel be together, but how it comes together is certainly a challenge. Perhaps if you had some spacers that entered through the hub and held the two halves of the wheel frame apart equal to the pin diameter, laid it horizontal, then maneuvered each wheel/pin in, and finally removed the spacers and bolted the two halves together? To do this properly with minimal roller wobble, you’d probably have to have the top and bottom halves not be reflection images.

Ether, as to Duraomnis: We used them this year for what was originally an H/slide drive. They are shipped assembled, and dis-assembly was not something obvious. I’ll try to remember to take a look at ours on Saturday to see how they go together and if I can confidently take one apart find out what they’re made of. By “axial load”, I take it that you mean load parallel the roller axis, or equivalently, thrust/braking along the wheel’s canonical direction of travel. Please advise if this is incorrect.

Duraomnis: …I’ll try to remember to take a look at ours on Saturday to see how they go together and if I can confidently take one apart find out what they’re made of.

By “axial load”, I take it that you mean load parallel the roller axis

Yes. The load that causes the roller to slide on its axle (one way or the other) until it hits something that stops it. What is the thing that it hits made of, and what is the shape and dimensions of the contact patch?

Another primary reason these types of Omni Wheels will not see use in FRC is due to the roller thickness. Both the original and the “improved” wheels have parts of the rollers with near zero thickness. This comes with a number of problems including that the rubber rollers preferred for traction won’t support a robot’s weight on near zero thickness (bumpy ride) and as the wheels wear they will very quickly become non-round (very bumpy ride.)

Both the original and the “improved” wheels have parts of the rollers with near zero thickness. This comes with a number of problems including that the rubber rollers preferred for traction won’t support a robot’s weight on near zero thickness (bumpy ride) and as the wheels wear they will very quickly become non-round (very bumpy ride.)

That’s for sure! Neither of these designs could be expected to produce a perfectly smooth ride in real life, even after they were tweaked for durability and manufacturability. Even dualies can only be perfectly smooth if the wheel axle is held perfectly parallel to the ground (flat ground AND infinitely stiff robot frame), but with a good enough roller design, they can indeed usually be expected to produce a smoother ride than these two wheel designs would.

Engineering is all about trade-offs, however, and a design like these two would seem to strike a potentially useful balance between a traditional single-omni design and a dual-omni design: smoother than a single-omni, and lighter/more compact than a dual-omni. It still remains to be determined whether they could be produced at a low enough price point to compete with the current market leaders, of course!

EDIT:
Now there’s an odd idea. I was considering refining my design and printing it in pieces just to evaluate the concept, but then I remembered that many “impossible-to-make” designs are trivial when additive manufacturing is employed. What if a multi-nozzle 3D printer were employed: nylon for the structure, TPE for the rollers, and a soluble support material to maintain clearance where necessary?

When there’s an axial load, what does that white nylon rub up against (material and shape) ?

The white nylon rubs against the polycarbonte body of the wheel. Looking at the AM pdf it appears the roller contacts a flat face. I could be wrong on this, I’ll leave it to someone with the time to open the cad to confirm.

The white nylon rubs against the polycarbonte body of the wheel.

Polycarbonate. Hmm. Is there enough room between them to install a lower-friction (perhaps nylon or Teflon) shim?