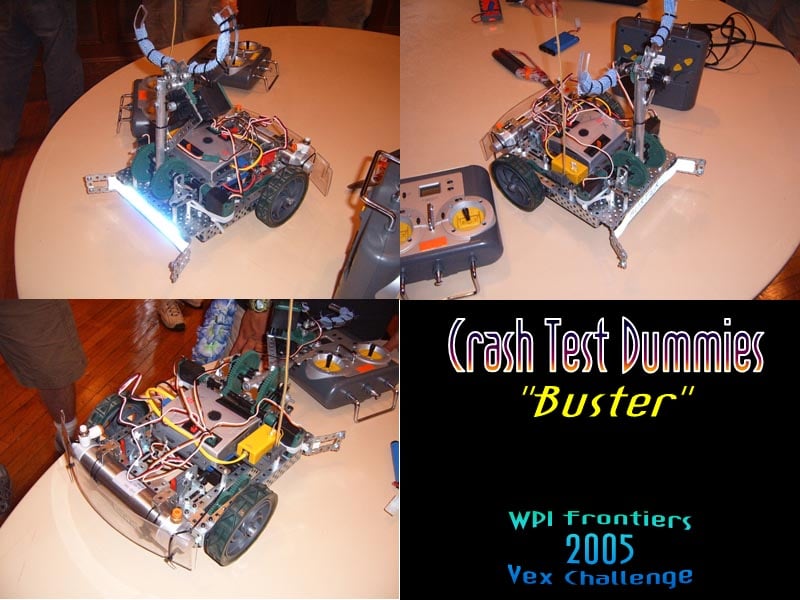 This picture is from several weeks ago from the WPI Frontiers Robotics summer course for high school juniors and seniors. The second half of the program was a Vex robot challenge, which was their Savage Soccer (users.wpi.edu/~savage) game from 2004. This is a picture of the winning Crash Test Dummies’ team robot - “Buster”.

The robot had 2 wheel drive, geared 1:1 off the motors. They used the gray inner-wheel from the middle of the small green Vex wheels as a third, unpowered wheel in the front of the robot.

The robot used a high power, two-motor-drive pivoting arm with a pneumatic powered grabber to be able to pick up either one tube or one ball at a time, and score these in either the single or double multiplier scoring zones.

The only sensors on the robot were two limiting switches geared off the drive line to count clicks (using the + shaped gusset plate).

Their autonomous mode attempted to use the limit sensors to count clicks (to emulate wheel encoders) to count the distance to the 2x scoring multiplier button.

Rules and pictures of the playing field are available on http://users.wpi.edu/~savage/

P.S. The glowing in the top left picture was from the reflective tape used on the front of the robot with their team name written on it.