pic: Write in Kamen? I did. 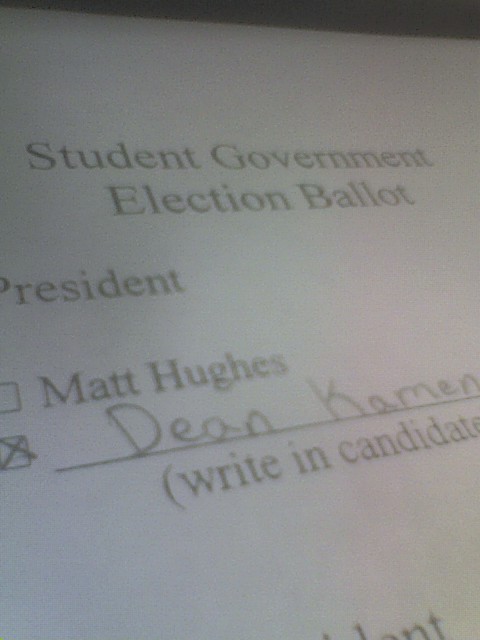 Recently, my school elected Student Government Officers. I remembered the Top Ten from this year’s Championship’s.
whytheheckme May 4, 2008, 11:33pm #2

Could we get enough people to do this in November?

I don’t know about anyone else…but in all honesty I think this would be a bad idea. Plus, doesn’t this violate the user agreement, ie. no political discussion?

IMO i think that voting for dean is a horrible idea. There is no way you will get enough votes to beat out one of the major candidates. And as important as this election is vote for the candidate you think will support STEM initiatives, because they will be able to make more of a difference then wasting your vote.

Plus, doesn’t this violate the user agreement, ie. no political discussion?

I’m not a big CD user, so please take my opinion with a grain of salt. This political thing seems to be a growing misconception. As written, political discussion isn’t explicitly against the rules unless it takes place in signature files:

Due to abuse and a large amount of complaints, politically oriented content should not be placed in your signature.

However, it has been politely suggested that political discussion should be kept to a minimum and should be located in the “Chit-Chat” forum:

We would also like to ask that any political discussion would continue to take place in the Chit-Chat forum.

It is my belief that the most interesting discussion on these fora will always contain political content. As such, CD members should be encouraged to use political ideas to integrate their own views into a larger global context. To mitigate the risk of certain types of degenerative arguments, political discussion should continue to be closely monitored, but if CD users are withholding their intelligent comments for fear of “breaking the rules,” then this community is working against itself. Self-censorship is the most dangerous kind: I almost didn’t post this.

Before people question the judgement of writing in Dean as a candidate, look at the context. This was a student government election, not a federal government election. This vote was obviously a joke, unless Dean Kamen really goes Josh’s high school. Throwing away a school election vote is not really that big of a deal.

This vote was obviously a joke

Indeed, as was my comment. I wasn’t actually suggesting that people go out and vote for Dean Kamen for president of the United States.

Anyway, I’m not old enough to vote in the presidential elections.

while you guys may be doing this as a joke some people are not… http://www.chiefdelphi.com/forums/showthread.php?t=67163&highlight=write+in+dean

while you guys may be doing this as a joke some people are not… http://www.chiefdelphi.com/forums/showthread.php?t=67163&highlight=write+in+dean

This is my PA Democratic Primary absentee ballot, all filled out and ready to be mailed in.

PS - Yes, I have a real ballot I already sent in as well.

I believe he was referring to the discussion that took place after the post more than the initial post itself.

Bingo. I thought it was a little more apparent that this was a spinoff, but i guess I should’ve referenced the initial picture.