pic: You will be mine 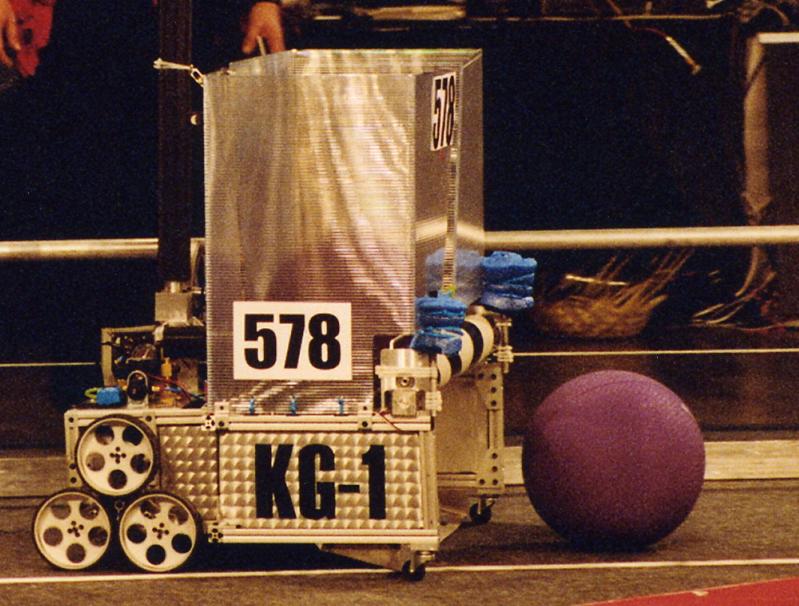 I see that you got your robot all fixed up, and even a bit improved since the finals of the Pittsburgh regional. For those who weren’t in Pittsburgh, 578’s robot took a huge pounding in the second match of the finals. At one point as I stood in the drivers station, out of the corner of my eye I saw pieces of their tri-wheel fly up in he air. It was not a pretty scene. Kudos on the great job of getting the robot back together. It looks amazing.

and to get our triwheels reassembled - we had to go back and use the original alum ones that our Mechanical Engineer had originally made, but decided where too heavy

we asked the inspectors if using the original alum ones were ok since we had shipped the bot with nylon ones, and they said as long as form and function were exactly the same, the different marterial was not a problem.

we had to remove a pneumatic cylinder from our platform lifter to free up weight.

Since we are not competing anymore this year I guess we can tell everyone one of our trade secrets. When we added the plastic box in the pits at Buckeye it didnt work! :ahh: it would pick up one ball, but when you tried to get a second one under it the first one jammed against the back wall.

we were almost ready to take it off, but we decided to try one last thing- we sprayed the insides walls with silicon, then wiped it down really good - there was no residue left, and the silicon did not come off on the balls, but it allowed them to slide on the plastic instead of hanging and binding

so if any team has been trying to herd balls with PVC or metal arms, and getting the balls wedged and having your bot drive up on them, try putting a film of silicon spray on those surfaces - it was literally the magic that saved the day for us at Buckeye.

dont put it on so heavy that the surface stays wet - wipe it down good with a rag - it will leave a film, almost like polishing the surface, and it wont come off on the balls, so its not in violation of the rules.