I’ve been out of the FRC game for a minute but something I’ve noticed is that there’s been an uptick in teams using Picos and Teensys in order to interface with i2c sensors on their robot thanks to the Rio i2c bug that causes freezing. In particular I took a look at @Thad_House’s implementation of i2c over UART using a Pi Pico. To help make teams wire their robots a little more cleanly I designed a PCB that lets teams plug and play their i2c Sensors without having to manage or solder janky pinheaders.

It features both 2.54mm pin headers and JST PH footprints if you don’t want to use an adapter cable, as well as some zip tie holes to strain relief your sensor cables. 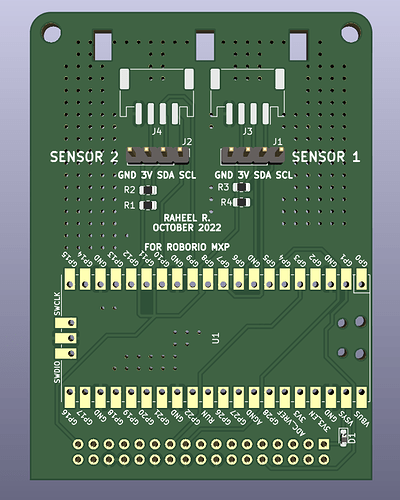 The pin out is identical to what’s listed on the Github repo so teams already familiar with this software should be able to plug n play without issue. The only major difference is that this board adds i2c pullup resistors and powers the sensors from the 3v pin on the MXP rather than the Pico’s 3v source itself.

The bom can be found here.
(note that this sheet doesn’t contain the JST connectors because they seem to have been sunsetted, until I can find a reliable source for the JST recepticle, I recommend using the 2.54mm pitch pins with a cable like this one)

The Gerber files, if you’d like to make one yourself, can be found here.

If there’s any interest, I’d also love to assemble a few of these myself to sell to teams at a reasonable cost.

If there’s any input on this board please feel free to rip it a new one, it’s a live project still and I’m happy to learn from it.

feel free to rip it a new one,

If you’ve got the dosh I think PCBWay can make em hot pink!

But this looks like a great tool to add to the arsenal thank you!

I have a similar idea that I’m working on! Your board looks good, keep up the good work!

This combined with an I2C to USB firmware upgrade for the pico sounds like a product coming together. 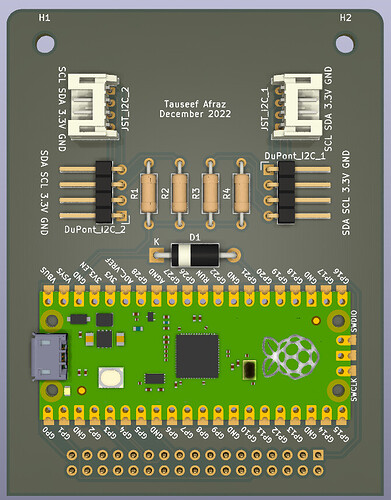 Differences between V1 and V2:

An important thing I need to mention, this will not work with @Thad_House’s original code as the pins are different, but don’t worry, I have provided an updated c++ file and .uf2 file for the Raspberry Pi Pico. Unfortunately, I have not been able to test it since I do not have a Pico and I don’t have a soldering station to be able to make a sample board as I wanted to.

The BOM can be found here.
NOTE: Unfortunately, the JST connector that I wanted to use is currently unavailable, that is the reason why I do not have a price on the BOM. If you are able to find a compatible/similar connector, feel free to use it and let me know so I may update the BOM.

If you’d like to make one yourself, the Gerber files can be found here.

If you want to look at the schematics and the PCB file, they can be found here. You will have to use KiCad as that is the software I used to make this.

If there’s any input on this board please feel free to rip it a new one, it’s a live project still and I’m happy to learn from it.

The same goes for me! Also, let me know if you and/or your team use the board! It would be awesome to hear that! I am actively willing to learn and grow my skills!
Thank you!

I’ll buy it for a dollar + shipping

I did think about adding a passthrough for the NavX but I wondered if the bandwidth would be affected and I didn’t know if I had space for the traces so that is why I never added it. I can experiment and see if I can physically add it and send all 34 traces to the male connector to put a NavX on top. If I am able to do it, call it V2.5.

This document is designed to help you create myRIO Expansion Port (MXP) boards for roboRIO. We will continue to update this document before and during the FRC season, so be sure to check back as you work on your design. If there is any information...

You might be able to find a connector with long pins that would let you stack these with the board you have. These are generically known as stacking connectors.

I did try to look for something like that but the problem I wanted to avoid is, I wanted the MXP connector it self, with the box around the pins and that little slide-in locking. I never was able to find that but the question always come, how would you solder that 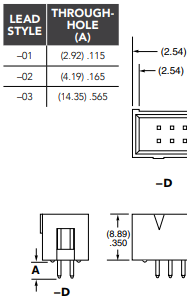 Note: You will most likely need to do a search for this part number and order from a distributor.

If you did that, I don’t think you’d be able to use the NavX’s PWM pins, since this would be an unapproved active MXP device.

oh… I literally just finished V2.5 as I see this. I didn’t know there were a approved devices list for the MXP

You could still use it, it just limits what you can do with it.

To be honest, I don’t how often teams use the onboard NavX pins, I thought majority of teams use the NavX just for its software features, so, I should be fine