The day after our first regional, I’ve obviously spent most of the day on CD. Wandering around the sight, I don’t see any threads about Pit Designs and it seems to me that many teams have amazing pits, and I for one would love to see them.

I would be incredibly new to this because I never knew teams actually are prepared for this. I thought all you need for the pit was your tools, but I guess not. I mean I saw some teams have a nice set-up but nothing like this.

This is really nice, and I would be interested in doing something like this. What should our team have if we were have one of these?

This is really nice, and I would be interested in doing something like this. What should our team have if we were have one of these?

For FRC, you have a 10’ cube with a table and a power outlet. Fit your robot in, and anything beyond that is up to you. (Minimum size is 8’ square by 10’ high, used at cramped events.)

Tools, displays, whatever else you want to put in, just don’t spill into your neighbor’s pit and try not to spill into the aisle.

I’m sorry, my post was unclear. But for FTC, I’m not sure if all the pit area tables are the same. I meant, if we were to to a setup like this, what should we put on it. Team number and pictures come to mind. Would there be anything else?

I’m sorry, my post was unclear. But for FTC, I’m not sure if all the pit area tables are the same. I meant, if we were to to a setup like this, what should we put on it. Team number and pictures come to mind. Would there be anything else?

I’m not sure what the rules for pits are in FTC, but there are many teams in FRC that have pits in the style of ours.

Really the first priority is convenience, I know in our pit it has become really easy to store/access a lot of the tools/materials we use.

These are our pits

They were new last year, we go them donated by MC extrusion and Centerline. They were pretty darn expensive, but are the nicest pits ever and are easy to move in/out of competition as they are on wheels. 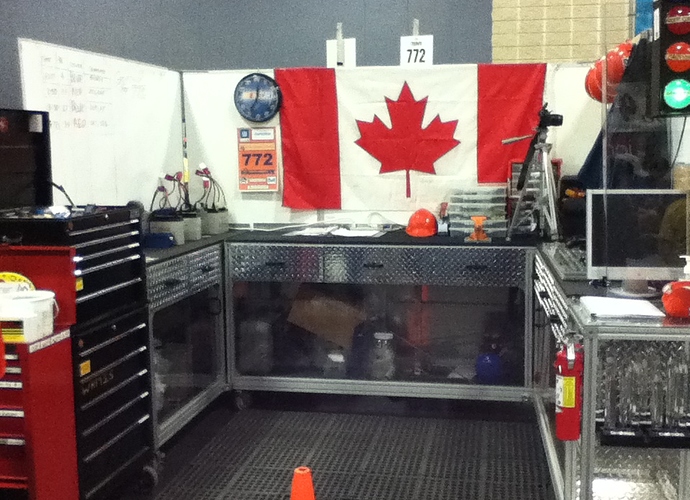 Pit design is always a balance between what you want, what you need, and the minimal space allowed.

Now if I could just get my team to do all this, maybe we would have a killer pit too!

Chairman’s Award is not about building the robot. Every team builds a robot.

A clock, next to a small whiteboard with your schedule. I forgot to pack a clock for Boston, as BU doesn’t want anyone to know what time it is.

I know, you can look at your watch or cellphone, but with your hands full of robot guts you really would like to know how fast you have to work before your next match.

Also, sidewalls are nice for a pit, but I like the sides open to make it look less cramped.

Here’s a photo of our new pit which we used for the first time at Waterloo http://www.othsrobotics.ca/images/articles/pit2012.png

It replaces an ABS special we used for the past several years as the ABS was getting unsafe. The Bruce Power safety inspectors loved this one and it helped us win the Safety Award. It will shrink from the max 10’ x 10’ down to 8’-6" square in increments of 3". No ladder required for assembly. The telescoping tube is ham radio antenna tube and comes in increments of 1/8" with a 0.058" wall. I’ve been asked by several people to write up the design and make it available. One of my projects this week before the GTR West. I’ll post it on CD as well.

My team had twenty students and three mentors, plus sometimes parents, scouts for other teams, judges and roaming photographers in our pit. On top of this we had three tables, a battery cart and a robot cart.

My team had twenty students and three mentors, plus sometimes parents, scouts for other teams, judges and roaming photographers in our pit. On top of this we had three tables, a battery cart and a robot cart.

You do realize that without anything else in the 10’ x 10’ space, that comes out to a little over 4 square feet per person? How did anybody move?

One of my favorites: http://www.chiefdelphi.com/media/photos/31005

One of my favorites: http://www.chiefdelphi.com/media/photos/31005

Another great pit from a Wisconsin team is Wave’s (2826). There’s not a picture of it in CD-Media, and I don’t have one, though.

This year I realized that it was specifically designed to be awesome on a corner or in the middle of an aisle.

Another great pit from a Wisconsin team is Wave’s (2826). There’s not a picture of it in CD-Media, and I don’t have one, though.

This year I realized that it was specifically designed to be awesome on a corner or in the middle of an aisle.

Not the best of pictures, but our pit can be seen on our website, specifically here, http://www.waverobotics.com/apps/photos/photo?photoid=136861120
thanks for the props.

On the simple end of the spectrum…we just have our toolbox, one shelf unit, and our battery cart. The pits in Arizona were only 9’ by 9’, so things were a bit crowded. Plus there was a very large column in front of ours. Just beware that your pit space might not be as big as your “stuff” at some regionals, so make sure your design is flexible. 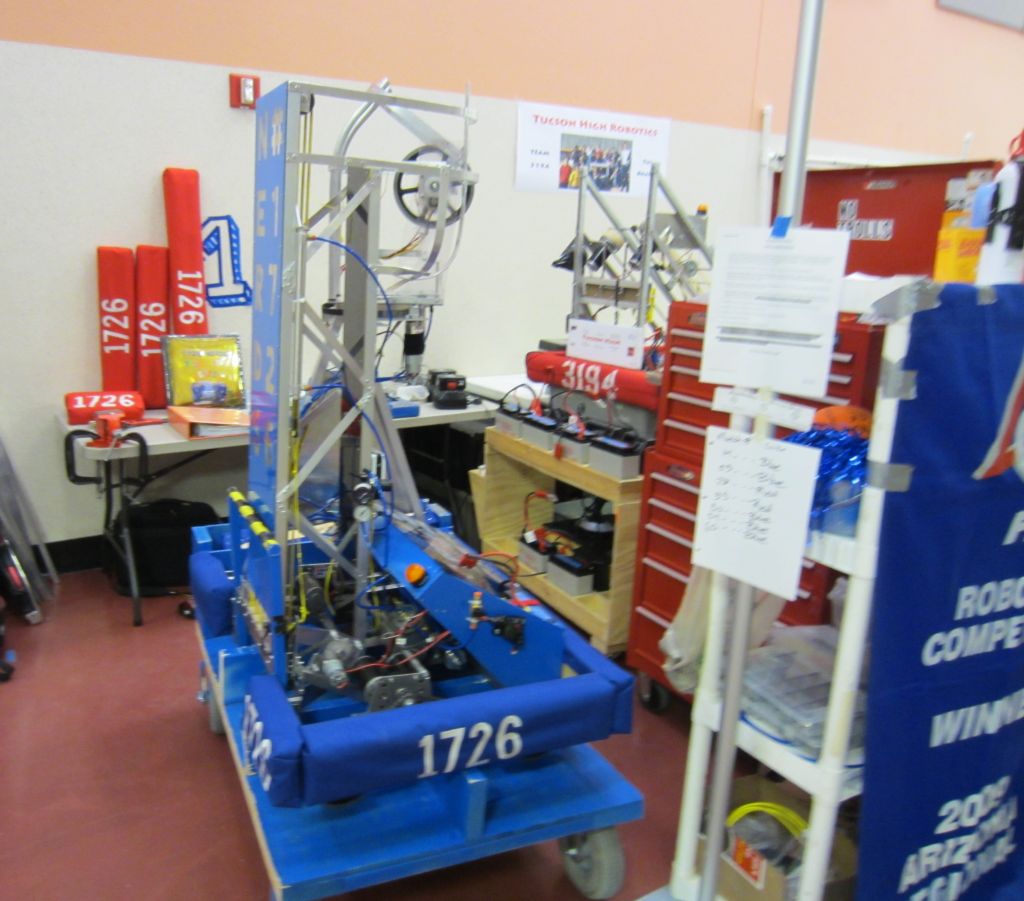 Our team doesn’t have a large pit display. We normally travel in 2 school vans and are limited to what we can bring. Our pit didn’t have much but it worked nicely, we had our 2 tool boxes off to the one side, battery box was behind them, the table had labeled organizers on one side, white board in the middle and manuals on the other side. Under the table we had a few crates with spare parts, they were well labeled so we knew what was inside, and on the other side of the pit was a small table with hand outs and info on the team. We also use our robot cart as our work bench for the robot. As i said it wasn’t the best but it worked really nice for us, setup and tear down time was about 10 minutes.

not the best picture but its all i have right now

This was my first year at a regional so I was overwhelmed by everything including the pits. I was the mentor assigned to do most of the monitoring of work the pits, so I had time to check out other designs whenever things were quiet. But what I was impressed with most was not so much the visual appeal of the pits as much as the utility provided by of some of them. Things like:

It is really great to see some attractive pit designs that help to promote the teams identity. But being a newcomer I was much more interested in how to make a more functional, safe, and effective portable workspace.

All of the chargers are connected to a power strip inside so all we have to do is roll it in, and plug the power strip cord into the provided power. Doesn’t take up much room in the pit and keeps things looking clean.

Just a note, the lid goes behind the cart in the pit, covering the wheels so it does not take up any extra space.

We’ll be in St. Louis for champs. If you happen to be there, you can come check it out.

159 really goes on the simple and disorganised end of the spectrum with two cheap tables and a couple of the KOP type crates from previous years and our small electronics toolbox into which we jam every tool we can’t just randomly strew around the pit area. I don’t know about other regionals, but at denver, the judges give a pit housekeeping report every day with 3 options, a frowny face, neutral face and happy face. this year, us pit crew were overjoyed that we got a neutral face which In my three seasons hasn’t happened before

Last year was my first year as a mentor, and I was asked to oversee our pit operations. We didn’t do anything special in the pit except bring our toolbox and crates of tools and spare parts. I was blown away by some of the great pit designs at my first regional, in South Carolina. I was especially taken by the pit design of team 1319, located across the isle from us. I resolved to do something to make our pit more organized and effective.

The first step was to make a rack to hold cases of fasteners and other small parts. We took this to St. Louis, and it really helped. This year, we improved that rack by incorporating battery shelves and chargers. We also upgraded our robot cart to have a “shelf” for the control station. In addition, I got the students to design and build a “bench topper”, with shelving, lighting, and a whiteboard. At the Virginia regional this year we found these improvements really made the pit a better place to work. It’s still not perfect, and we still can eliminate more clutter and organize things better. Before the North Carolina regional, we plan to add more shelves to the benchtopper, and improve our signage. Now that we have the basics of a really functional pit, we can spruce it up a bit. 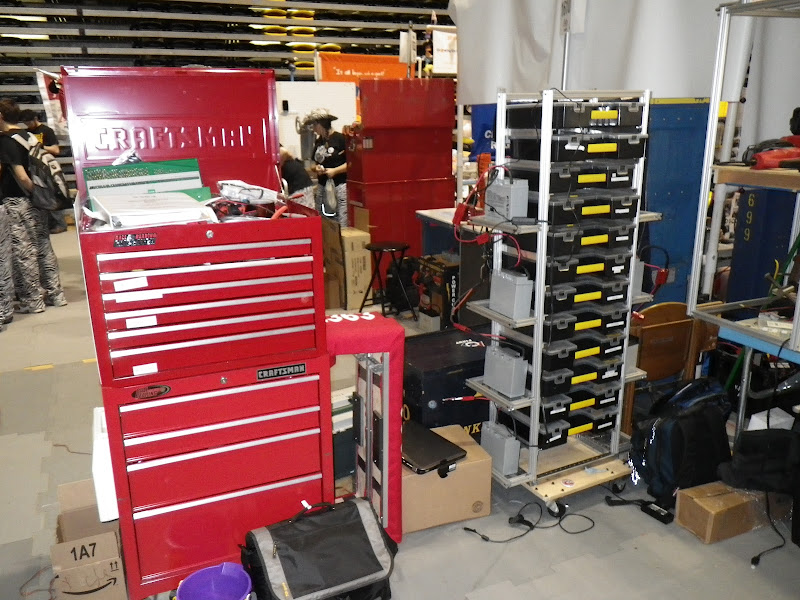 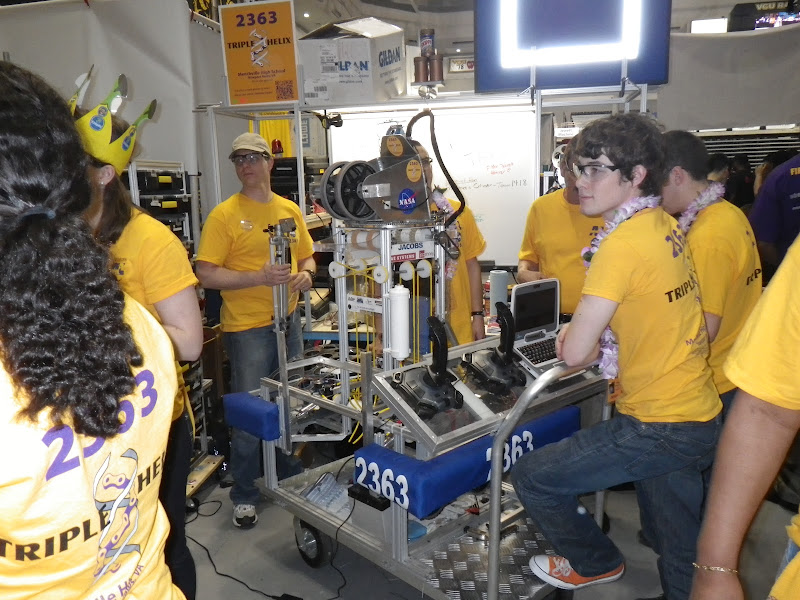 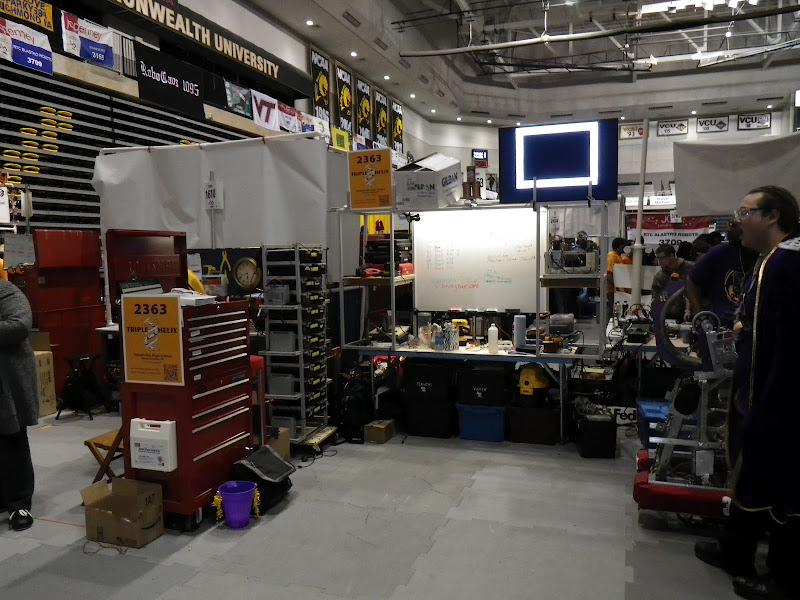 Note the trophy mounted to the top of the pit. We got it for donating the most peanut butter to the food drive, over 100 lb.