Recently during a competition, a student in the pits accidentally dropped a battery which fell on another student’s ankle. There was some concern about fractures and the student was limping for the two days after, but there was nothing broken.
Although there was nothing broken, I wanted to ask what can be done to minimise the probability of things like this happening, because someone could get more seriously injured than just a swollen ankle if the battery had dropped directly on their leg, or foot, or if something sharp was dropped.
Considering that pit areas are always cramped, what are some ways to handle robot batteries in the pit safely so things like this wouldn’t happen?

The main question im getting from reading your post is, “how can we prevent people from accidently dropping things in the pits?” (with a focus on batteries specifically in this case).

Would love for others to chime in here with great suggestions, but honestly, in my eyes, not much can be done here other than telling people to be careful.

Batteries are heavy and accidents happen from time to time (such as accidently dropping it). You could try and develop some kind of lifting system/strap/handle for your batteries, but that sounds cumbersome.

You could also look into implementing processes such as clearing the area of the pit where the battery is traveling so nobody could potentially get hurt, but this sounds fairly impractical.

If this was something like a battery fell off a shelf, or someone was being blatantly careless, then there are definitely steps that could be taken to prevent it in the future (more secure storage/shelving, communicate with the person why there actions aren’t appropriate etc.). But this sounds like a random accident that you honestly just can’t plan to prevent.

Again, would love to hear others opinions here and am not saying I’m 100% right, but that’s my first reaction from reading your post.

Edit: I’ll add that the “pit areas are always cramped” can be addressed by ensuring only X number of people are in the pit at a time. I don’t know your team specifically, but I do know it’s fairly common for teams at events to have 10-15+ people cramped in their 10x10’ pit with robots and toolboxes. Overcrowding the pit is certainly not going to HELP prevent people getting hurt if something is dropped.

You could try and develop some kind of lifting system/strap/handle for your batteries, but that sounds cumbersome.

Team 3624 has made a bunch of these, I’ll send a photo of them when I get back in the lab (unless I forget). It’s basically two loops of material perpendicular that wrap around the battery and give it handle so you can hold it easier. It shouldn’t be too hard to make a few of these.

Our battery cart has all of the batteries near the ground to start with, to the odds of them falling from a great height are minimal. Obviously, loading it into the robot from there presents different challenges each year. We also work hard to always remind people to use two hands when picking up batteries!

We have a higher toolbox top that people like to move batteries to in between the charger and robot, so that is a good point to suggest somewhere else because it has the potential for a falling battery.

One thing is to have one person do it and have space in the pit there for them to complete it, and have them follow through and not leave things half done where they remain a hazard until dealt with.

Another is making the battery more accessible on the robot. If you have to lift it through the robot, like we did this year, it is harder to have a solid grip. I bruised my thumb removing the battery because the pivoting part of the robot over it fell back down, so I know first hand that location can be hazardous if not well considered.

We also work hard to always remind people to use two hands when picking up batteries!

IMO, “people” is a large source of problems. We have a single person in charge of everything to do with batteries in the pits. They are trained. They take the battery out. They make sure it goes on a charger. They know which is the next battery to go in. They put it in. They make sure it is actually reconnected. YMMV.

Please do. Batteries already have an irresistible handle

; anything to discourage its use.

We had one of our batteries pushed off our shelf by someone in the adjacent pit behind the curtain at competition and hit our student.

Last week a large, strong student did not use the “natural” handle (yay - he gets why not to) but then the battery slipped out of his hand; fortunately only 2 inches above the bench. Topic for next meeting’s lead-off safety discussion.

How crowded/cramped is your pit area? How much othe stuff your team brings is actually used to support the robot? Are people storing their backpacks in the pits? How many people are typically in your pit vs. how many are really needed? How is your pit organized? Is the charging area near where the battery comes out of the robot?

How many people take care of handling the batteries? This includes getting them properly secured in the robot and properly plugged in, consistently as well as putting them on charge, consistently. The teams I know well typically have only 2-3 people who have this responsibility. Have the people handling the batteries been trained? Have they spent time analyzing what they do and how to do it better? Are they always rushing? If so, why?

what are some ways to handle robot batteries in the pit safely so things like this wouldn’t happen?

I wonder if better communication could help. Get in a habit when you’re about to lift or move something heavy (like a battery or a robot) or to use power tools to announce your intentions to the rest of the team. Then no one is surprised when the battery moves from one spot to another, and are on alert to stay out of the way.

You can’t prevent someone from accidentally dropping a battery, but you can make it so no one is surprised when it moves.

can’t prevent someone from accidentally dropping a battery

I don’t disagree with you but I did have to accommodate my boss’s boss’s boss once about dropping things. He asked me what could go wrong when moving to the shop to renovate a very old (large, heavy, essentially irreplaceable) computer.

I thought I was smart to see that it was awkward to move. (A both arms full load - a little scaled up from the one handful the students think a battery is.)

His response was - you guessed it - “make sure you don’t drop it.”

(And like an FRC team the “you” was I was the I&C engineering and maintenance supervisor who was not allowed to touch anything. I had people that had to do it right and that is not the same as and a lot riskier than doing it myself.)

Here are the photos I promised: 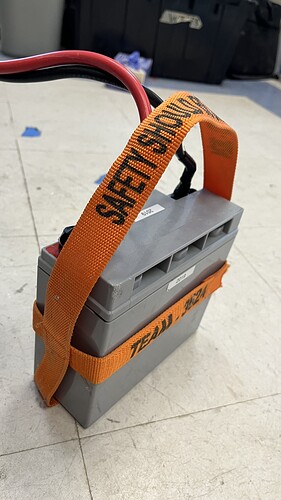 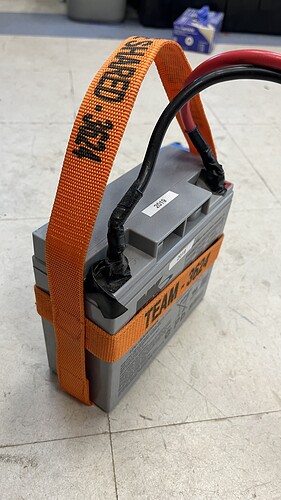 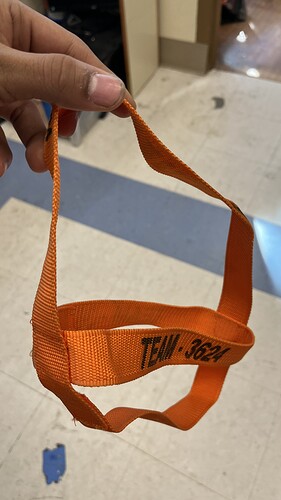 I have a very strict rule for batteries…Always use two hands to carry the battery. No matter how strong you are or how proficient you think you can handle heavy objects, two hands will keep the battery from slipping out of your fingers. Mishandling batteries will get you a broken toe, that is from experience. A dropped battery will likely fail at some point in time, next match, tomorrow or over night. Nearly 100% of failed batteries brought to me for inspection have a dented corner, indicating a drop. The battery internals (plates and fiberglass separators) will either push together causing a short or break off the connecting bar and reduce capacity of a cell or cells. When that occurs, the battery terminal voltage will drop in increments of 2 volts. If when checking batteries using a controlled discharge tester (West Mountain Radio CBA-IV), the discharge curve will suddenly drop by two volts during the test, but will appear normal for the remainder of the test. A famous quote comes to mind, If you have time to do a task over, you had time to do it right the first time. Don’t rush with heavy objects, power tools, or the robot.

Always use two hands to carry the battery. No matter how strong you are or how proficient you think you can handle heavy objects, two hands will keep the battery from slipping out of your fingers.

This is what I have preached on every team I’ve been on. So far we have never had a battery fall more than a couple of inches. knock on wood

I don’t love the idea of a battery handle as I remember at the Milwaukee Regional one year I wanna say 2015 or 2016. A team brought in large car batteries to power their pit and ended up dropping one. Which made the loud entrance area silent as we waited for the doors to be unlocked. It was so loud nobody made a sound for at least a minute until it was determined everyone was okay.

This is how I lift my batteries, idk how you guys prefer to do it, though. 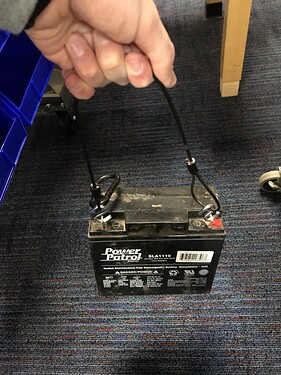 This just made my day. I tried to show my students, but it took too long to explain the joke for them to get the humor. However, they now know not to short a battery out, so I guess that too is a win.

These are awesome, but do they need another horizontal loop near the bottom of the strap? I don’t know how tightly yours fit the battery, but I worry about the vertical loop getting accidentally knocked out of alignment, allowing the battery to fall through the bottom. Maybe that’s not a thing in real life.

I think you could probably sell a few hundred of these if you had a pre-order form.

RoboPromo used to sell a similar product: Battery Case
Unfortunately, it appears to be out of stock at the moment.

I worry about the vertical loop getting accidentally knocked out of alignment, allowing the battery to fall through the bottom.

I don’t imagine that failure mode would come up when the battery is loaded, only if it got knocked out of place while setting it down, and when you go to pick it up the handle just slides off.

I’ve done a few projects with 1" webbing and this seems more than adequate, bordering overkill. If it were just string or something I’d share your concern.