I wanted to remind everyone that shouting “ROBOTS” in the pits is something we should aim to retire moving forward. Shouting “ROBOT” is generally not effective and routinely causes more issues than it solves. Here’s a screenshot of the FRC Blog written by Frank back in 2014 that echoes this request: 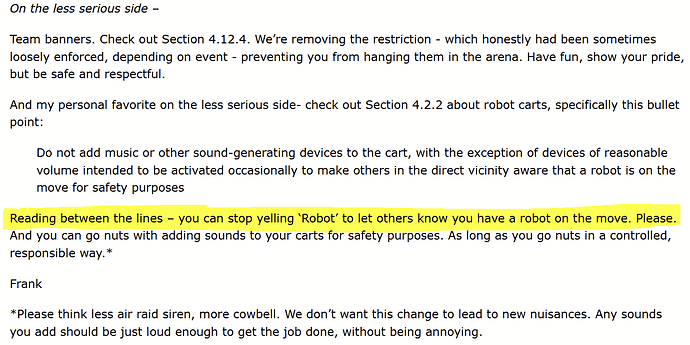 Please encourage teams and event staff to keep this in mind. I hope that having this link handy will lead to quieter, less stressful events in the future.

EDIT: Need the link in a hurry? Just type the following into any browser. Note, clicking the link should bring you back to this thread: http://stopyellingrobot.com/

I 100% agree with this, politely saying “excuse me” and allowing the small amount of time it takes for people to move out of the way should be the celebrated and encouraged behavior.

I regret writing this, but I was read the riot act 3 times during a regional from the safety volunteer for students on my team or a team we were helping supposedly not saying robot or saying it loud enough. Although I believe in all three instances they were after being told to, and also having someone preceding the cart to say that.

This experience was unique and maybe regional/person specific I think, but it was bizarre, but harmless to us. It was the old school of old schools approach to safety monitoring I guess.

I’ve had the same thing happen to me, too. In my case, the person on the mic at pit admin was encouraging teams to yell “ROBOT” whenever a robot was in motion saying that it was “in the rules.” I pulled the post I linked above up on my laptop, walked over to pit admin, and asked them to read it. After they finished, they made an announcement saying that they had been provided “additional information”, and teams should no longer yell “ROBOT”. Everyone in the room cheered.

It’s always bewildering to me how these “rules” tend to manifest out of thin air.

I’ve had to correct many volunteers before who informed teams that this was the proper thing to do. A lot of them are people who’ve been volunteering for a very long time who came to the false conclusion that “I’ve always seen it done this way, therefore it must be best.”

Hey now, I’m pretty sure you were there too

I see threads like this pop up at least once a year. The general conclusion I’ve come to is that the large majority here on Chief (at least of those who’m have been vocal in threads like this previously) share the opinion that yelling ROBOT is annoying and very unnecessary. Unfortunately, this forum is only a small representation of the FIRST community.

I also share similar experiences mentioned above. Have experienced safety advisors chew myself and others out for not shouting, along with other key volunteers at events. Although typically this only happens while I’m traveling abroad for competitions. Here in Ontario I rarely here it. At most one or two teams per event, and that would be considered a large number of teams IMO.

This is exactly why I created this thread. I want to make sure everyone has easy access to a credible source of truth to point to when confronting notifying event management.

In case anyone needs a quick and easy way to find this thread (and the link to Frank’s blog), I registered this handy domain: 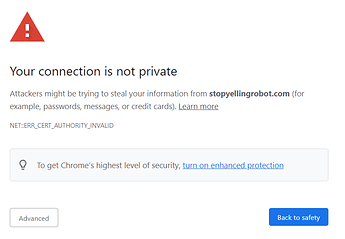 It’s a redirect, but let me add a cert. Check back shortly!

I do agree with the message, however I do think speaking (from someone who pushed robot in a cart for all of this season) there are certain instances where it may be necessary but only in few cases. One of these cases was at our district event (DC District Event) this year where all 10 members on a team needed to stay in their pits while the pits were also smaller than the usual size. What also didn’t help was the fact that our pit was only a few feet away from the field, making a path only around 3-4 feet in width for robots to go through (many teams needed to get through the path to go back to their pits). So when some of us were working, we didn’t realize we were outside our pit area as we were constantly working and since the venue itself was so packed, it was loud. People shouting “ROBOT” were a reminder for us to stay safe inside of our cramped pit from the carts going through. However as I said at the beginning, this is only a rare instance that only happened due to COVID precautions and I hope it wouldn’t happen again, but still something to keep in mind.

A “stopyellingrobot.com” vinyl sticker is going on the sponsor panel next year.

I’d buy this web address on a t-shirt if someone makes a fun graphic.

Yelling ANYTHING can be obnoxious and annoying. “Excuse me” or similar is at least gracious. Moving fast enough that a collision occurs is unacceptable at all times.

I will say “human” loudly when I hear “robot”. I choose to assume we are collectively advocating self-identification…

I do agree that it would be better to just not yell. However, at competitions such as worlds it is nearly impossible to navigate the large crowds without yelling or doing something. There is just so much other noise and stuff going on that you have to do something to make yourself known.

I have yelled “people” when someone was being particularly obnoxious about yelling “robot”. I feel the logic for what you and I are doing is sound . The stated mission and vision for this program are:

The word “robot” does not appear in either of those passages but the word “people” does appear in both.

+1. I’d advocate for @AllenGregoryIV’s approach of asking people to move instead of yelling at them.

From the Safety Manual, §5.4 Transporting Procedures: