I agree with this so much. Personally whenever I’ve been helping move the robot, I’ve seen just going to people in front of the cart and asking them to move out of the way of the robot to be much more effective and less annoying than shouting “ROBOT”

Implied in that mission is being polite. My mom used to swat me when I was impolite, and I eventually learned that polite doesn’t cost anything but gets better results.

Learning soft skills is an important part of this program. If a team is having to run between the field and the pits, they need to learn to manage their time and priorities better.

I will say “human” loudly when I hear “robot”. I choose to assume we are collectively advocating self-identification…

I have yelled “people” when someone was being particularly obnoxious about yelling “robot”. I feel the logic for what you and I are doing is sound .

Logical? Sure. Constructive toward your end goal? Outlook not so good.

Funny enough I actually made a design for a sticker a couple years ago. Never uploaded it to RedBubble. 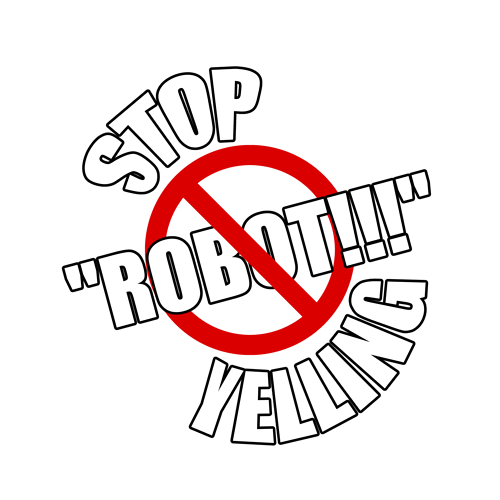 There was no expectation that it would be 100% effective. Some of those yelling “robot” ignored me or didn’t hear me. Some did, paused and stopped doing it. The greater effect was the other people in the vicinity who clearly got the message and are likely to find an alternative to yelling “robot”.

However, at competitions such as worlds it is nearly impossible to navigate the large crowds without yelling or doing something. There is just so much other noise and stuff going on that you have to do something to make yourself known.

This, along with situations where teams tend to feel rushed to get back to pits and make a repair so they make it in time for their next match contribute the most to the yelling in my opinion.

I’m not sure if yelling robot is the problem as much as it is the yelling itself but I do think the underlying issue here is that teams feel rushed to get those few seconds they save by politely saying excuse me and requesting people to move out of the way. Until we solve that or try to mitigate it, then at best we just replace the word robot with something else (which is still a step in the right direction).

A method of mitigation could be something as simple as explicitly telling teams that the safety of people is more important than them getting to queue a few seconds before than they would have if they didn’t rush or could be something more tangible like barriers (something I think they tried doing at Greater DC this year but most likely served a different purpose than managing cart routes). Regardless, I do think that something needs to be done to reduce that rush because that, personally, seems to be the underlying issue here.

There might be a bit more bandwidth available for graciousness/politeness if the events weren’t so friggin loud.

Sorry @Oblarg, but politeness and inclusivity should be top priority, no matter what. There’s no good justification for being a jerk at events.

THIS MORE SO THAN ANYTHING ELSE. I am fairly certain we are way over the limit for what is safe. especially if you are unlucky enough to have your pit next to a speaker

I think you took what he said differently then I did. They are not exclusionary. you don’t have to pick one or the other.

Sorry @Oblarg, but politeness and inclusivity should be top priority, no matter what

“Excuse me kindly, sir, but I do believe that heavy piece of metal is about to fall on-”

“Excuse me kindly, sir, but I do believe that heavy piece of metal is about to fall on-”

“Excuse me sir, but that piece of metal is in a precarious spot. Let me move it out of the way for you so no one gets hurt.”

This approach seems to work pretty well for me on the field when I help run events.

our team tries to have a student walking ahead of the cart letting people know they need to step to the side. Due to the volume and how involved in something an individual may be i have found taping someone on the shoulder to be the most effective.

I have a hard rule that no one on the team is to yell robot. it’s a huge pet peeve of mine. on multiple occasions I have had a student or mentor walk up behind me and when i don’t react fast enough or don’t hear the first time they stand on tiptoes behind me, lean in and scream robot about 4 inches from my ear. This is absolutely unacceptable.

The point is that rudeness should not be condoned.

I think you may have missed the point of the joke. External circumstances are going to have bearing on how polite a reasonable person is, even if that person has a genuine commitment to politeness as a principle.

Turn down the music at events, and this issue will get a lot better.

As a general rule, jokes and sarcasm don’t carry well in written text. They should also be avoided when working with students.