My team, 2534, used a pneumatic elevator this year. Our biggest issue originally was that we would be running out of air during the match, even with our compressor going, so we decided to mount a 2 gallon air tank on our robot. Now that being said, we then ran into the obvious issue of weight. Due to the tank and the fact that the pistons way a heck ton (Don’t know off the top of my head the specs of them), we had to do a bunch of hole drilling.

Without dissecting the design too far, I think a similar system could be made that uses a smaller volume of air per actuation.

If you were able to flip the cylinder mounting so that it was extending up instead of down, a similar effect could be accomplished by leaving the retract port of a double-acting cylinder open to atmosphere. In this case, you would be relying on gravity, or even an external spring/force separate from the piston, to ensure it was retracted quickly enough. Depending on the application that may or may not be acceptable.

Of course, all of the above falls apart if you require significant force on the extend and retract strokes of the cylinder, which pneumatics applications frequently require.

We ended up doing a prank revolving around that once. we called it pneumatic fluid but they were actually bubbles

WildStang 2008 had a pneumatic lift. 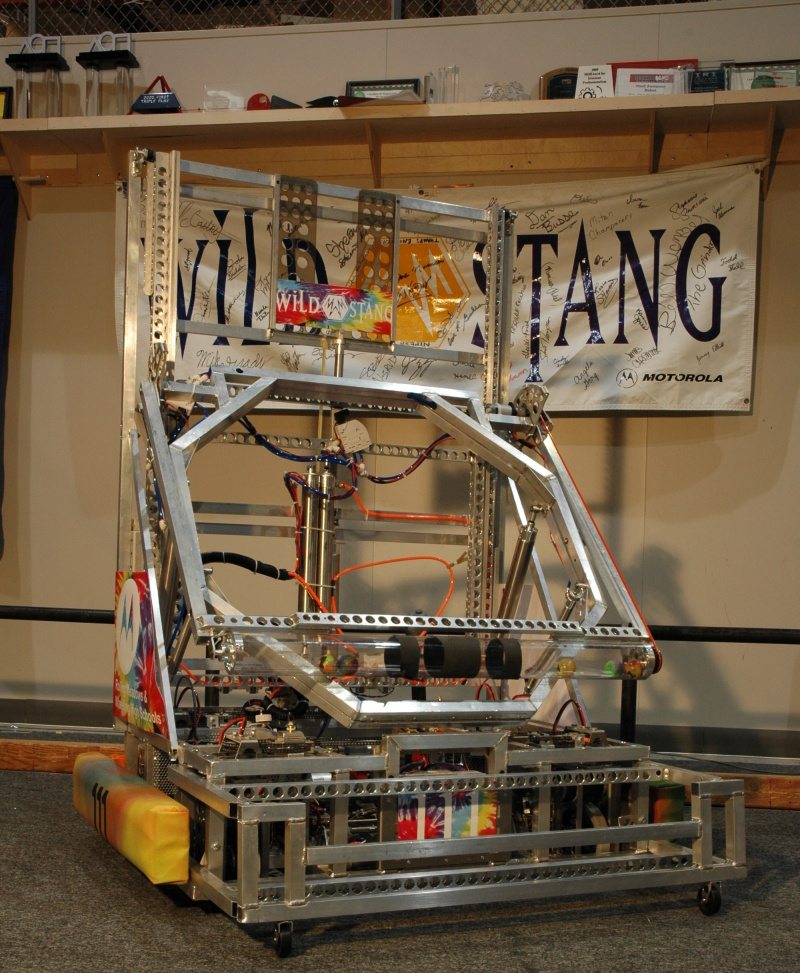 Never again. This thing was a guillotine.

For Logo motion our team created an arm that was powered by penumatics. It worked well and we had a elbow to get finer adjustments

3534 has used a pneumatic elevator for the past two years with no issues. Deep Space worked well for it as there were set scoring heights that we designed the cylinder stroke to meet. For scoring in the cargo ship, we stopped the 1st stage 28" stroke cylinder at 14" using a magnetic position switch. To lower the packaging height, we pair two 28" stroke cylinders in opposition. If you go with air, go all in. We used an aluminum 3 gallon air tank. Used a nice manifold with our PCM’s wired to the back side. Ran well, very little mainteance. With this elevator, we won the Quality award at Kettering 2 and the Controls award at Marysville. 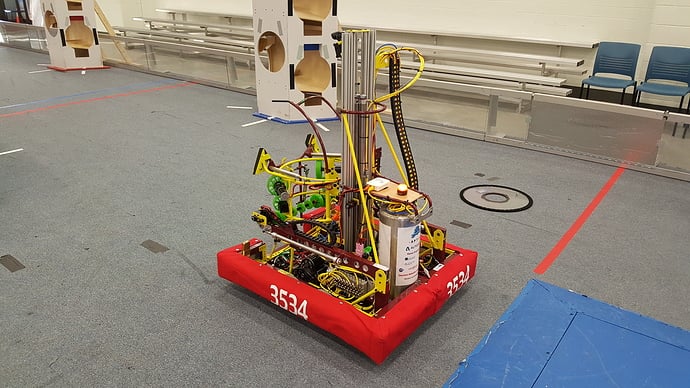 45 tried this in 2018. It used three cylinders lifting pulleys to lift the one stage elevator. It 'worked" but was incredibly slow and wouldst even lift if we had a power cube. Plus it was heavy and put us over the weight limit so we removed the cylinders to focus on switch and exchange scoring. I probably would have gone with a more traditional motor driven elevator instead.

BTW. We did the math. Created a table that represented cycles in a simulated match. Air consumption per stroke for each mechanism. Multiplied over the cycles per match. Sum it all up for your storage needs. Calculate your compressor volume and time to make sure you can charge between matches. Design for linear forces that side load the mechanism, not the cylinder rods. Create logic tables for solenoid states to help the programming team. Just good planning and system design. CD has so much speculation on what can’t be done. Our team took the challenge and succeeded with it. We tried something new, learned, and had fun. The best parts of FIRST.

Beware of ‘experts’ on here saying it can’t be done. 1108 made a very reliable, very powerful pneumatic ‘elevator’ in 2018. We used the cylinder to lift the robot after the match. Also, in 2011, we made a two-stage pneumatic elevator (three position) that was very fast, to the top pin.

When we did it in 2018, we ran the pressure at about 30psi, which slowed it down, but saved much air. We also moved up from eight clippard air tanks to one 2.5 gallon air tank.

Think about this years’ game–there were really only three heights needed and how many times did you actually go to the top height? We never did in a match.

So lets do some math.

A Bimba 09 (1-1/6 dia) cylinder 24 inches long uses about about 21 cuin of air (push). If you have three clippard tanks at 120psi (105 cu in), you can operate that four times before you’re down to 57 psi. That cylinder provides a push of about 52 pounds and a pull of about 48 pounds. And it would travel that 24 inches in about half-a second at 60 psi, depending on friction. Three tanks isn’t many and you’ll have a compressor refilling them during a match.

On an energy basis, a tank of air is a compressor operating at 60 watts for say about four minutes…14400 joules for a match. If you need your motor-driven elevator to lift in let’s say four seconds, using two redline 775s that’s 322 watts x 2motors x 4 seconds…2500 joules…air has more energy available by a lot.

If you’re ever a machine designer in the future, know that air is often the best way to move things.

Beware of ‘experts’ on here saying it can’t be done

Just because something works doesn’t mean it’s the best option. I’m not going to restate all the reasons given above, but using only pneumatics for a lift is equivalent to restricting yourself to one single low power motor.

It can be done, but other options (motors) are more viable.

Both McMaster and Bimba sell spring-extend/air-retract as well as air-extend/spring-retract versions of their single acting pistons.

If you size the piston correctly, these are good at minimizing the air (since you don’t use any air for one of the actions.

I would say anything over 6 air tanks is going to cause headaches between matches to re-charge, especially during elims when the turn-around times are shorter using the standard FRC compressor. If you have a higher capacity compressor, it might be manageable to go with more tanks.

If you have three clippard tanks at 120psi (105 cu in), you can operate that four times before you’re down to 57 psi. That cylinder provides a push of about 52 pounds and a pull of about 48 pounds. And it would travel that 24 inches in about half-a second at 60 psi, depending on friction. Three tanks isn’t many and you’ll have a compressor refilling them during a match.

The math you’re missing is how many tanks the FRC legal compressor can refill in a match. Fortunately Andymark has already worked this out, and the answer is ~4 tanks max. So if you want to plan for say, 12 cycles in a match (12 clippard tanks worth according to your calcs), you’d need 8 tanks pre-charged, plus another “4 tanks” worth from the compressor.

In short, you can make it work, but you need a lot of tank volume (and a lot of pre-match charge time) to do any significant repeated work with pneumatics in FRC.

So if you want to plan for say, 12 cycles in a match (12 clippard tanks worth according to your calcs), you’d need 8 tanks pre-charged, plus another “4 tanks” worth from the compressor.

Which also means you’d need to have your robot powered on and enabled for 2/3 of your timeout window during elimination matches just to properly refill your tanks.

That’s the biggest issue we ran into. We used a large tank (1 gallon) just as insurance since our main actuation was pneumatics, and using the Viar 90C, we had to run the compressor 3 and a half minutes. We luckily only had an issue once pneumatically based that prevented us from filling (wire broke on pressure switch) but pretty much as soon as we got off the field during playoffs or back to back matches, we had to power the robot back on.

EDIT: We knew the 90C was broke to failure when planning, but that’s what we had in stock and never went searching for a better option. We had a car radiator fan on the back of our cart and the compressor mounted sideways, allowing us to blow air across the motor and then also the compressor housing itself. We never locked a compressor up, even on our practice bot that typically didnt have a chance to see the cooling fan, yet that bot only had 2 clippard on it.

Our 2018 'bot with a 2.5 gallon tank (16.5 clippard’s worth of volume) would ‘top-off’ in about five minutes from a Thompson compressor. I don’t know where the Andymark calculations came from, but we’ve actually done this. Also, you don’t need to fill from zero between matches.

Never once was an issue filling it between matches at Wisconsin. I realize some venues (Kansas city this year) only give you five minutes between matches compared to a big regional, but many teams that have air already run eight or more tanks 1.25 gallons. This is not a reason to not use air.

Air tanks store an enormous amount of energy to use. The compressor sits there quietly storing it up. And when air cylinders move, they are strong and fast.

edit–Yes, I wouldn’t try this with the 90C. I’ve seen them lock up with continuous operation.

We had a pneumatic elevator this year. It used a 3/4 inch 28 inch stroke cylinder to go to level 2. It originally used 2 and went to level 3. We had to lose that second stage due to weight problems.
It worked very well as a level 1,2 and cargo ship bot. I think we would have had air problems if we had not lost the second cylinder for level 3.

My team 1073 did a pneumatic elevator my freshman year 2015. We had mag encoders along the 2 pistons controlling it allowing it to have 4 different positions. It is very possible but uses a LOT of air and is not nearly as efficient as a traditional cascade or continuous lift.

You can actually get position control on pneumatic cylinders if you use the right solenoid. With a three-position double-solenoid such as this one, the cylinder attached will hold its position when you have both sides of the solenoid deactivated. This is how our robot was able to do a both a level 2 and 3 hab climb this year despite using pistons for lifting the back half of our robot.

With a three-position double-solenoid such as this one , the cylinder attached will hold its position when you have both sides of the solenoid deactivated.

Not quite hold; stabilize around, perhaps. 3946’s arms in 2014 were controlled with two solenoid valves to achieve the same effect; we could pressurize or vent each side of the cylinders separately. IIRC, we had both sides pressurized by default, and the driver could vent either side (or both, but why?). Unless we moved those arms to the top or bottom limit, they required constant jiggering to keep them where you wanted.