Our team is using pneumatics to lift or collection but our collection needs a bit of bounce to it. Is there any way to set the pneumatics to “float” or set them so that they can move freely instead of holding a position?

Maybe someone else has a way to do this with pneumatics, but it sounds more like an application for something like a gas spring than a pneumatic.

That would still be capable of lifting an object?

You can make them weaker by activating the cylinders with a lower working pressure.

If your design let’s you leave one port open to atmosphere (e.g., only power one side), you can open the powered port to atmosphere and the mechanism will move freely.
For instance, let the intake drop due to jostling and only power it to bring it up back into the frame perimeter.

Took a look at your robot picture on Blue Alliance and I think you mean your intake mechanism. To make the mechanism have more “spring” to it and a less solid hold, you’ll need to turn down the pressure in the working side of the pneumatic system. You probably don’t need 60psi to move the intake up and down. Experiment with turning down the pressure regulator until you find a pressure that lets the mechanism move under force but also allows it to be moved where you want it when the solenoid is activated. That’s about the best you can do directly without adding much more complicated parts to the mechanism.

I will do that. You have a pretty good idea of what we want to do. That intake just needs to be able to come up so that we don’t keep getting pop rivets broken by impacts from other robots. Currently it just falls down onto a hard stop.

We use one pneumatic cylinder to raise and lower our intake.
To do this we use 2 single solenoids and not a double.
So when we want the intake to go up we turn on “up” solenoid and turn off the “down” solenoid.
This adds air to the side of the cylinder that raises our intake.

To put it down we turn off the “up” solenoid and turn “on” the down solenoid.
But then we set a timer for 3 seconds and after that timer expires we turn the down solenoid off as well. So now we have no air in the cylinder and it is free to float while in the down position.

The other “trick” is to use leverage to your advantage. By using a relatively short cylinder to actuate your intake, that is attached at some mid point on one of the arms of your mechanism, a force applied at the end of the arm will be multiplied at the cylinder action point using the ratio of the lever arm lengths. You can also mount the cylinder so that as the arm of your mechanism is trying to get pushed, that it is acting at an angle to the line of action of the cylinder such that there is a further force multiplying effect. But designing the mechanism such that a relatively low load at the end of your mechanism results in enough load to overcome the holding force of the cylinder, then the mechanism will “float” at this low load level.

FWIW, many teams construct intakes from polycarb, instead of metal, to help mitigate this type of problem.

You can use two solenoids. Plumb one to the extend and one to the retract (blocking/plugging the unused port on each solenoid.) You can set one or the other to send air to the cylinder to get extend or retract or even send air to both sides of the cylinder for a slight spring. You can also set your solenoids to direct the air to the plugged port on each solenoid to obtain a neutral, no air, position as well.

There are a lot of different spool designs. Many teams seem to use either single solenoid or 2 position double solenoids, but if you look there are 3 position spools with the center position with the A/B ports either tied to P,T, or Closed. 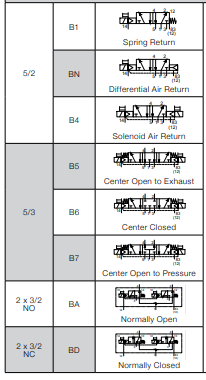