POLL: How are you controlling your bot?

Make your lawn mower a robot? I’m in!

You wouldn’t be the first!

How about an upgrade from a push mower that’s only a few hundred compared to THAT at 11k?

Our team uses one (Xbox one) controller for everything

Where do you find students that can operate these anymore? The cumulative hours “practicing” with an XBOX controller is hard to overcome.

Our driver and myself do use Xbox controllers though. It is nice because we are much more mobile that way (one time we actually swapped positions mid match). For me the type of controller doesn’t matter that much as long as it doesn’t change mid season. I just need something with a ton of buttons…

These things are actually quite insane I love driving with my traxxas using it if anything it’s much more interesting and fun.

we began the season with joysticks, but ended up using xbox controllers with 12 ft cables, this made it so we could take our controller over to where we could see loading station better, even from the middle drivers station. Plus both me and the driver grew up with xbox so it was like second nature for us

Due to the fact that triggers have no definite “front” and “back”, we also had a button to completely flip the driver’s sense of front and back on the robot. This makes driving more natural when the robot is “facing” you.

I can’t remember if this was implemented in our competition code, but at least in offseason, the robot switched between Arcade and Cheesy drive depending on it’s speed. As of last week, this was replaced by a cubic deadband.

Along with that, our climb was activated by a 2fa system that used buttons our drivers would never regularly press in a game.

Im seeing cheesy drive here and on wpilib screen steps. Can someone explain that to me? Pm to keep thread on topic would be ok too.

this is cheesy drive. It allows for better control of the robot at high speeds.

We use GTA drive (as I’ve seen it called, throttle on the triggers, turn on a stick) and cheesy drive

Posted this in a separate thread already, but I think it’s worth to place it here. 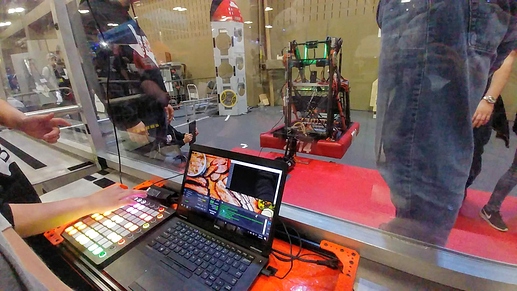 Team BBQ 2714, this year used a Novation Launchpad as our operator controller rather than a traditional button-box due to its sheer versatility, the number of buttons, and well, maybe the LEDs played a role. The driver had an Xbox controller.

For communication, we had a server on the RIO and a client on the driverstation that sent packets with information (of button co-ordinates) triggered by a button click.

how did you get 12ft cables, we were looking into this but I’m personally unsure how to get them

Looking back, I realized they are actually 10 ft, and we just bought them off of amazon. We used Xbox one controllers so they were just simply micro usb cables. We used anker because of their durability and they lasted the entire season in great condition 10/10.

we unplugged the cable from both ends every match to make sure we didn’t damage any of the connectors, we bundled them up at the end of every match to avoid tangles, and we used anker, which I trust personally with all my cables, because of the double braided nylon cover and the overall durability of the cables.

we are not very neat with our wires at all

We use GTA drive (as I’ve seen it called, throttle on the triggers, turn on a stick) and cheesy drive

This is my current favorite control scheme by a mile, and I highly recommend that people try it out.