How many things did you guys change from bag day to your day of competition? Between competitions?

We swapped both our primary mechanisms at our first event, and are swapping the camera mounts at our second event.

Member of 4013 here. This season has been interesting in terms of the robot for us due to having back to back competitions. We finished our competition bot the day of bag and tag and had a practice bot to mess with. Having a practice bot really helped a ton this season. Most of the robot was complete except for our hab mechanism which we worked on post bag and tag with the practice bot, and mounted at our first regional, Rocket City, where we found we didn’t have the weight to add it. We ordered new smaller pistons so we could do atleast hab 2 and recieved them at our next event the following week at Bayou where we passed with the changes at a weight of 125.0! We plan on reducing weight for Houston.

We went from cargo and hatch to cargo only. New re-enforced climb. Wire management. Auto tests. Water jetting spares. All sorts of stuff.

At midwest we put the climber on the robot and switched to longer gripper fingers for the hatch. Our second one we switched to a motorized cargo intake that drops to the floor to floor load.

First regional:
Changed climber motor from one CIM to two 775Pro.
Replaced broken encoder for elevator (it was broken before we bagged the robot)

We did some more repairs, too, but this is stuff we changed.

We made a laundry list of small changes when we unbagged at San Francisco - re-strung our elevator with better string, changed our diagonal supports out for better ones, put the camera on our robot, took off the pieces that let us pick up hatches off the ground because they got in the way on our practice bot, etc.

By the end of San Francisco our robot was pretty destroyed - we played hard defense and weren’t really robust enough to survive it. We made the choice to heavily disassemble our robot so that we could take the inner stage of the elevator home to fix up and beef it up (it’ll be our withholding allowance for Silicon Valley), and rebagged our robot in two bags and three or four pieces. On Friday we’ll be putting our robot back together with a much stronger elevator, and making various other changes to improve our robustness.

We built a climber for SFR but it didn’t quite work so we didn’t bring it to competition. We iterated again between competitions, but didn’t finish by our internal deadline so it won’t go on at Silicon Valley either. Maybe someday

Pretty much every single line of code.

Literally every electrical component. New elevator. 70% new ground cargo intake. minor updates to shooter basket for reliability. And a big sticker right on the front of the bot.

We adapted our hatch mech to pick up from the player station. Also we did code changes with set positions and a little electrical work

It certainly seemed at both Rock City and Bayou that every robot went through some inspectable changes during the event, at least reinforcement, realignment, lightening, adding or cutting manipulator friction, or similar, and many of the robots at both events started Bayou different than they ended Rock City. The biggest mod I saw taking place was 6886 adding carbon fiber forks to lift their alliance partners to attempt a 36 point endgame.

We have redone our triple buddy lift arms by adjusting the mounting mechanisms. We also added a winch to pull the arms up slightly to make sure partners will be above level 3.

Our entire arm, hatch, ball grabber assembly was removed prior to rebagging at rock city. A new hatch grabber/ball mechanism is ready ti be reinstalles when we get to unbag in central Missouri. We also get to install our shiny new limelight.

Should be a busy practice day trying to install the new stuff.

We changed our climbing mechanism from a pneumatic lift in the back to a 775pro driven rack-and-pinion, changed our intake support from polycarbonate to lightweight aluminum, and made our front-climber arms longer. And some code changes.

We’ve completely redesigned and constructed a new endeffector for our 4 bar, combining it with our over the bumper intake and actually widening the effective width of cargo intake. Got it attached to final bot during open bag a few days ago, and will be competing with it this weekend.

We’re really happy with how it’s working thus far on the practice bot, hopefully it proves itself on the field. 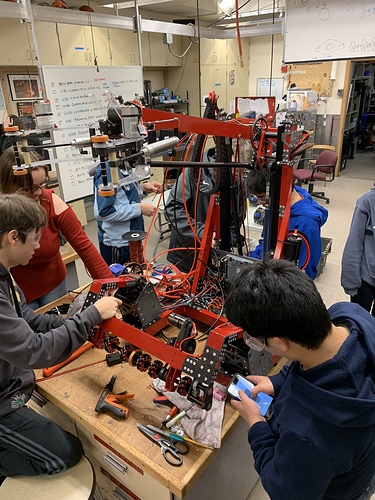 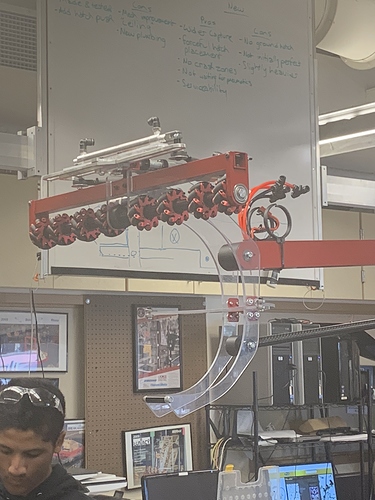 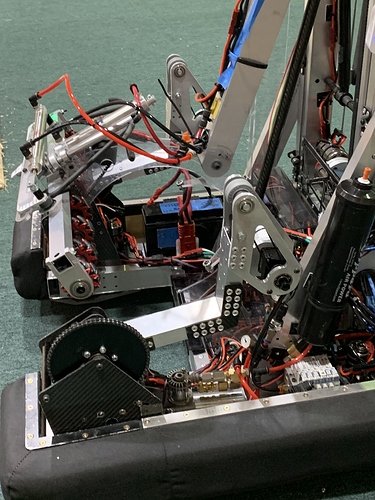 We changed our climbing mechanism from a pneumatic lift in the back to a 775pro driven rack-and-pinion, changed our intake support from polycarbonate to lightweight aluminum, and made our front-climber arms longer. And some code changes.

also added LED’s. which if we’re being honest, was the most important change

Added a climber that has reliably worked for level 2 (only in testing) and is still untested for level 3. We also changed from all three levels of the rocket to only the lower two after our top lead screw bent.