Hello, could anyone help me on how to mount a potentiometer on a rod shaft !!

We’re going to need a bit more information here if you want a complete answer. What kind of potentiometer? What kind of shaft? What machining capabilities do you have? What is the application, and are there any packaging requirements?

The “correct” way to connect two shafts is using a shaft coupler. Depending on the size of the shafts, you may need to turn one or both of them on a lathe to a common size to find a suitable shaft coupler.

There are also some “hacky” ways that you would never see in industry but work fine for the low loads and short life-spans of potentiometers on FRC robots. One way is to take a short piece of surgical tubing, stretch each end over the end of each shaft, and close zip ties over the surgical tubing ends. The negligible inertia of the potentiometer means the surgical tube acts as a direct coupler. Another common way is to bore a hole in the larger shaft at the same diameter as the smaller shaft, cut a slit in the shaft through the bored hole, then close a shaft collar around the larger shaft. This makes the larger shaft itself act like a collar and squeeze the smaller shaft, keeping it from slipping.

You are also likely to have to use a compliant mount for the potentiomer since it will be difficult to get the axis of the shaft you are wanting to sense and the axis of the potentiometer to line up exactly. Some of the coupling methods (the surgical tubing Ari mentions) will help make this misalignment more tolerable.

This will also depend on how the potentiometer is mounted. If it’s attached rigidly to the frame, then you will certainly need something to take up the misalignment. If it’s attached via a flexible mount, like bent polycarb, you can get away with a more solid connector.

I think one of the best ways is to use a beam coupler. They allow for misalignment of the shafts while still being rigid to get accurate rotation readings.

McMaster-Carr is the complete source for your plant with over 580,000 products. 98% of products ordered ship from stock and deliver same or next day.

Before everyone jumps on the price of these… historically these have been in first choice for a significant discount to teams. Also it wont count against your BOM since you get it in FIRST choice.

Also you can use a standard shaft coupler. Turn the end of your shaft down to 1/4" and get a potentiometer with a 1/4" shaft. We usually use 2 standoffs and a small plate or 3d printed plate to screw the potentiometer into. I would disagree with anyone that says you “have” to use a compliant method as it is difficult to line up exactly. My suggestion if you are using standoffs is to tighten the shaft first and then tighten your standoffs.

I’m in the “allow for some modest misalignment” camp as few things ever align as well as you hope.

It’s easy to get things together in a mode where even a modest stress causes problems in the long run (and often times the “long” run is a lot shorter than we might like).

I feel surgical tubing is too too flexible and too easy to twist from even modest torques. I’ve used short lengths of rubber fuel line as couplers in the past (I’ve built road racers in my shop so there are a lot of those sorts of things around) or some clear tubing as well (Tygon? PVC? It was what I had around - probably more for a lawn mower than a race car).

Attached is a photo of a pot mount for a past robot. The design of the pivot was originally not done to accommodate a sensor so it might not be exactly what we might have done if this was planned from the outset but it turned out OK. The key was the “crazy” nut which coupled both locked the fastener in place and provided the protrusion to stick into the coupling line. One of the team members commented that he’d never seen a nut like that before and I told him it was probably because that specific instance didn’t exist until we made it

It was pretty solid and had relatively low amounts of slack and hysteresis so it tracked the arm angle pretty well. 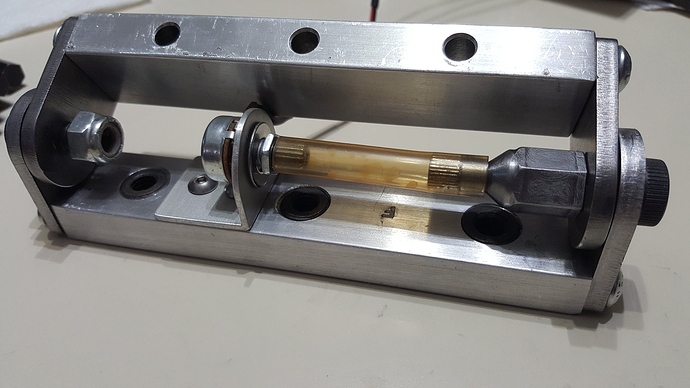 Put the body of the pot on a plate, then attach the shaft with either surgical tubing or heatshrink. I’m personally a fan of heat shrink if it works for you, as it doesn’t have as much rotational compliance as surgical tubing. 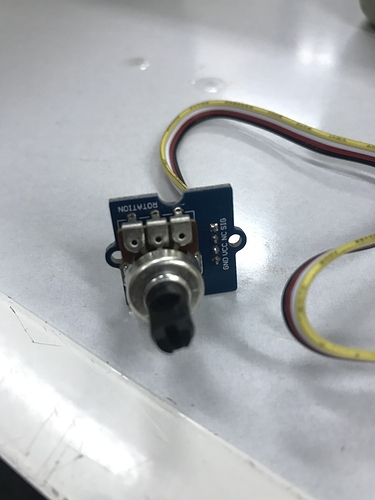 Hello, how could this potentiometer be mounted on a solid rod ?

Hello, could anyone help me on how to mount a potentiometer on a rod shaft !!

2 ways I usually do it are:

1.You can put a gear on it that engages with a gear on your shaft.
2.you can attach it with some tubing(surgical tubing,pneumatic hoses, to a section of the rod that is the same diameter.

Assuming you meant the rod end to the tip of the pot. You can try either finding a coupler that matched both ends. Or if not, then you might have to use multiple couplers. Or use a gears to drive one to another.

Something to be careful on. Almost all pot are limited on the number of turns. Going ‘hard’ beyond it usually will break the pot and render its future values unreliable even if you can ‘push’ it back in. [usually these are 5 turns, 10 turns, 15 turns, etc.]

What tools do you have at your disposal?

The pot in the photo looks like one where the shaft can rotate about 270-300 degrees at most. It does not look like a multi-turn type.

Look at encoder coupling techniques. They are similar. Mainly gears or a ‘flex coupling’.

Tape also works if you can handle the backlash!

Depending on your speed performance and accuracy. The simpliest way to use the Pot is just put it in line with another resistor (of known value). So that you go from 5V -> Pot -> Resistor -> GND. take the connection point between the Pot and Resistor and just plug that into an Analog Channel. You can then just use the simple analog channel read value directly. Note: lots of smaller detail I’m leaving out above here. You’ll need to calc what Resistor values you need to use based on the Pot’s max/min value (or the range of your rotation) <- this is then your analog range. Have a look at the RoboRIO’s analog channel which then explain the step factor.

This simple case only works in simple use case. The values will most likely fairly noisy, etc. (and the uncertainty of the 5V rail from the RoboRIO is also something to consider. But all of these for the most part, as long as you setup some sort of calibration cycles (basically reading the min/max ranges repeatly to get an avg’ing values and set that aside as reference for your code).

Other ways to use the Pot in conjuntions with more electronics (both analog/digitial parts) to change frequency, change charge/discharge timing, etc, etc <- these will usually be less susceptible to noise and more reliable.

Can you show data that illustrates the noise you are referring to?

Can you upload some schematics of the circuitry that changes frequency etc. and explain why they would be better than just the potentiomer on its own?

Hello, can someone please explain to me the difference between rotor encoder and rotary angular sensor(potentiometer). I have a project and it has six component torque sensor, strain gauge, shaft, worm gear dc motor, rotor encoder and Arduino, I need the shaft to be rotated 0 to 90 degree or to 180 degree and move CW and CCW, but the thing is that i need to use a potentiometer ( rotary angular sensor) but I don’t know the difference between them . At the end in the monitor screen it should display force, speed, direction, time and acceleration of rotation .

At the end of the day, a potentiometer, absolute encoder, and incremental encoder all do approximately the same thing; the difference is how they do it. 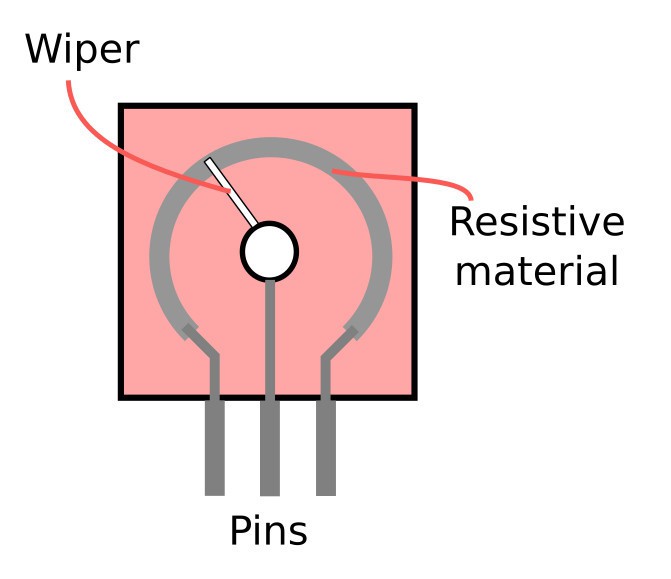 Absolute encoders use a magnetic or light sensor and a disc with a specific pattern to determine the input angle. Based on which part of the disc pattern is visible to the sensor, they can tell which direction the disc is pointing. They will spin a full 360°, then reset back to 0.

Incremental encoders (aka relative or quadratic encoders) work similarly to absolute encoders, but their sensor only reads the movement of the pattern. By using two offset rings, the encoder can tell which direction the disc is spinning. As the name suggests, the relative encoder can only measure relative angles, so it needs some zeroing maneuver in order to measure absolute angles. Incremental encoders will always start from 0° when they startup, then spin past 360° to 361° and so on.