I’m considering using some older brushed motors and PWM controllers to power some mech projects that will also incorporate 3D-printed gears and sync belt pulleys. Material-wise, I’ll probably just use PLA+ for those parts, but I have spools of Nylon and PC-Carbon I may also try. I can probably also persuade a friend to make a few Onyx parts.

My question is… What motor shaft to 3D-printed part power transmission approaches do you folks with experience find work best? We know 1/2-inch hex can work for some applications (Exhibit A: 3d-printed mecanum wheels on intakes this year). A few older motors (e.g. AM Gearmotors) have 1/2-in hex out, but other motors have 8mm keyed shafts, 6mm D shafts, round (unkeyed) shafts, and shafts with pinions pressed on. My intuition is… a 3D-printed part designed to mate with any of those could work with lighter loads, but with heavier loads the list gets shorter (& my guess is pinion interface is best). Not sure about keyed - it seems like wear could become a problem. One other aspect here… I’m striving for cheap, and I’d rather not use up the team’s versaplanetaries or sport gearboxes to get to hex. Thanks.

I’m striving for cheap, and I’d rather not use up the team’s versaplanetaries or sport gearboxes to get to hex. Thanks.

You have comparatively little torque directly off the motor shaft (depending on the motor), so smaller torque-transferring features may be fine.

That being said, one relatively easy trick is to grab whatever pinion gear for your motor you have laying around and print the inverse; basically using the pinion gear as a spline.

I’m striving for cheap, and I’d rather not use up the team’s versaplanetaries or sport gearboxes to get to hex.

There are many situations where a 0-stage VP can add benefits over just the output shaft, and having a gear reduction is desirable in many situations as well. That said, if you have a situation where direct drive from the motor shaft is reasonable (speed/torque is what you want, you aren’t concerned about side-loading it and busting the motor, mounting features work for you, etc), then shaft adapters are the way to go:

FWIW, we have had good luck using 3D parts in high load situations, as long as the amount of plastic under load is minimized (close to metal supports). For mating to a 1/2 hex, we used a mcmaster tube insert (part 9063T33), and also mating to standard hubs. Pictures of the 3D parts for both attached. Neither failed in competitions. 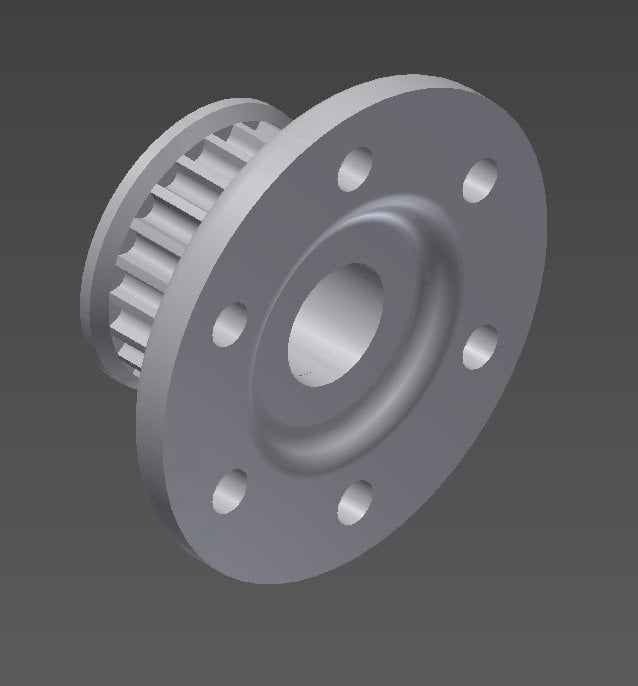 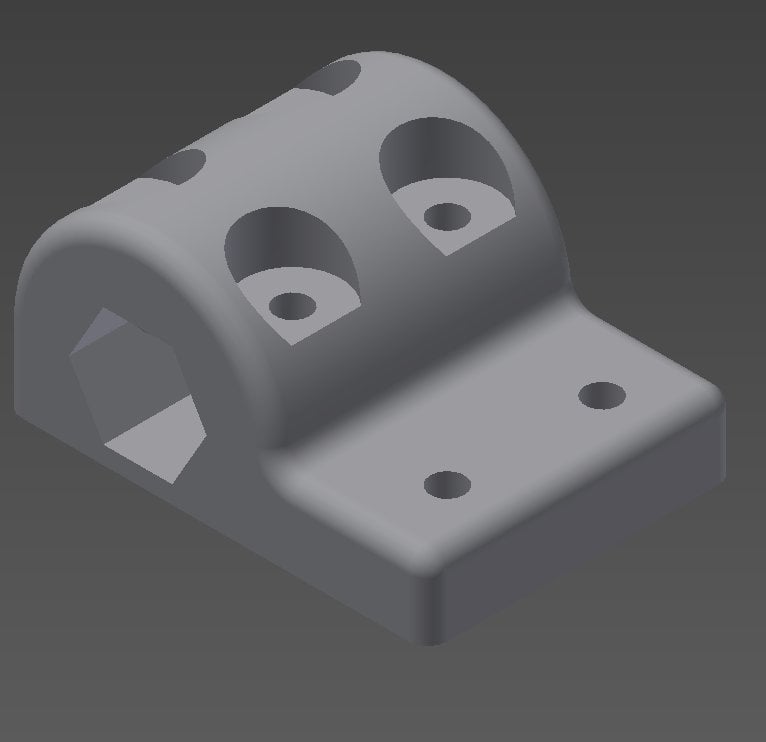 What is the second part?

We haven’t used them in competition, but in 2019 we had good prototyping results with 3D printing drive pulleys around a small hex bore gear. 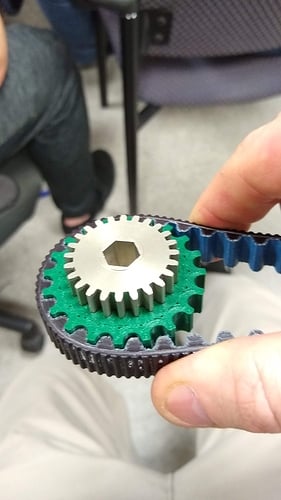 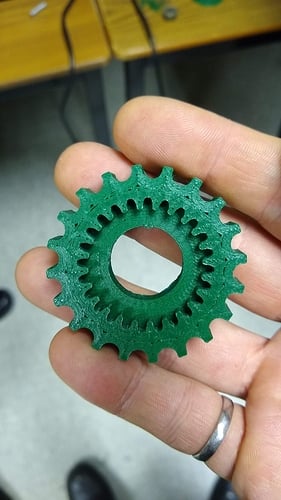 The second part was used to actuate a lever arm. The arm bolted to the 3D part using the 6 mounting points. The mcmaster hex tube was slipped into the bore, and then the whole assembly was slipped over a 1/2 hex bore. An initial 3D part design slipped directly over a 1/2 bore, but it failed (stripped). Using the mcmaster insert fixed that.

Thanks for the suggestions & sharing of proven solutions. All seem really good for the applications mentioned.

), mentor-initiated elevator project since no students & few mentors on our team have done one), but I’m not counting on it…

So this thread is an input to potential individual at-home projects as an alternative. It seems like a lot could be done with these old motors/controllers + fuse blocks, Arduinos, inexpensive 6mm-wide sync belts, 3D-printed parts, 2x4s/plywood & PVC, …

what are these ‘textured’ belts? they also seem to have a coating on one side. where did you source them?

if you could pm me as not to clutter the thread

They’re 12mm wide, 8mm pitch GT carbon belts from Gates. A bit more expensive, and harder to find pulleys for (hence the experiment with 3D printed pulleys). But stronger per unit diameter and width. We might use them on a robot one day.

Some of the failures we had using printed 8mm keyed hubs on the prototype shooter, were it twisting apart or the inside shell separating from the outer one. There are a couple fixes, mostly coming down to increasing how much is being printed around key spots. We basically increased shells, infill, and top infill layers. I didn’t go to 100% infill, but did find a setting to add a solid infill layer every so often. I don’t think I had to modify the model itself, but you can more substantial fillets or other changes as needed. But most important is previewing the print layers to find any potential weaknesses.

Last, we’ve experience past issues with heat and PLA, so we printed versions in PETG-CF that have higher transition temperatures. Those were on our prototype shooter for a little bit, and probably would have held up there, but I’m also glad we did switch to the Al hubs eventually.

A lot of your default infill patterns in printing are not really designed around transmitting torque from the center bore through the outside. Keep this in mind! You can either print fully solid, or design your own infill into the 3D model that deals with the loads more properly.

That said, if the part is thick enough and the loads aren’t too crazy we have been fine just printing hex directly into the part. But this very very much depends on what you’re attaching to what.

1/2 in hex works fine in most situations with most materials. 3/8 hex -only in Nylon and if its real real tight press fitted and even then - dont. We had a gearmotor with a 3/8 hex and it was more trouble than worth. We switch to the same motor I think PG78? with a key and Nylon had not problem (Taulman 910) to hold it and still does. Nylon, Hips, ABS and PETG will also hold the 2mm keys on a cim even though we just feel better with a 2x3.2mm key (we take a 1/8 in stock and grind one side down to 2mm) Its important you print it so you have no play (backlash) we usually dont do PLA for multiple reasons. Now the 10mm shaft on a PG motor or 8mm on a full cim with key the above materials if printed right are strong enough to repedetly stall the motor without damage. On other projects I had good experiences with D type shafts (Nema 17 and Nema 23) Stepper Motors.

Using gears as inserts would work very well, especially if they are “heat set” or heated then press fitted in, like a threaded insert. Also if you want it to be fully 3d printed, upping the wall count would help tremendously with the strength. For most applications 5-6 walls would be great. (This Is Overkill for some applications, but better overbuilt than underbuilt)

I’ve always wondered about this- it would be cool if someone came up with a load-optimized set of infill patterns.