I am wondering what are the pros and cons of Onshape and which features are actually useful and make it better. I have heard about limitations in assemblies and that’s it so what makes it worth it over other cad software.

Not to be snarky, but this has been talked about ad nauseum already. I highly suggest using the search function before making a new post.

Hi Guys, Looking for OnShape users that previously used Solidworks. In you opinion, what are the pros and cons of going to OnShape? Rick

We’re liking the collaboration convenience of Onshape. Though we don’t like that it is not as complete out of the box as the other options out there. What are your team’s go to apps and feature-scripts to fill in the gaps? I’d like to get a running list together. (or other programs. I know a few teams like to export and use Fusion 360 for CAM)

So there has been a lot of discussion of the advantages of onshape. The main disadvantages I hear are how it lacks some basic features of solidworks. Can anyone elaborate on exactly which features are missing?

Which CAD platform does your team use? Why? CAD

My team has used AutoDesk Fusion 360 for the last 2 years. This past year, we very successfully used it with a great workflow, including part drawings, CNC files, simulations, the works. We had our first tangibly successful robot this season, and good CAD was a big part of it. I teach engineering design classes at my high school as well as coach our team. All I hear from industry and colleges is that the students should be learning SolidWorks, and we’ve had a lot of discussions of switching, si…

Chezy Champs and Madtown throwdown will be the last two events that 973 competes in… with a robot designed in Solidworks. We are signing off of Solidworks, and onto Onshape. The Greybots are grateful for the years of support Solidworks has provided the team and still love Solidworks as a tool (most team mentors will continue to use it professionally). The team will be switching to Onshape due to the reduced overhead required to get kids to the point where they can be creating and editing parts…

Deciding what CAD software to use CAD

The collaboration features are a huge draw - it’s just like google docs, you see changes other people make in real time. I’ve monitored CAD changes during meetings from across the country before!

But perhaps the biggest plus for us is that it’s browser based and runs well on a Mac. All of our students have Mac’s, so the standard CAD packages (Solidworks and Creo) aren’t really useful for us.

not installing, using on less than decent hardware is nice. I put inventor 2020 on computers and it is ~11 GB download/install, that took me a an hour or two for 3 machines.

If you use other packages it may be sluggish. And also be not with all the features you like. have to use some untested 3rd party add-ins for things like CAM or other features that some software already has.

Cons
I’ll let you know when I find one.

Personally I feel like this would be a nuisance because when i’m working on a part I do not want other people working on the same part as me. However, I have never used the collaboration feature so I do not know how well it would work for me. We use a server called p4v/Perforce that allows us to edit and submit changes which also allows us to revert files if we don’t deem them necessary or if the changes made were made wrong.

in reality how much easier is it to learn over other cad software, I feel that most cad software follow the same general tools.

its the same as all the other programs .

Though the part studio feature is way better tool for ease of designing multiple part assemblies than anything else.

Could you elaborate on how the part studio works I have not heard of that before and it seems interesting.

If you look at our model ^. You’ll see different tabs at the bottom.

Each tab is its own studio and its own sub-assembly of the robot.

When drawing parts you draw in what is called a part studio. In a part studio you can draw as many individual parts you want in the same window. You can even draw them in the space of the assembly so you can reference geometry needed for bolt holes and other things. Then you go into an assembly studio and actually assemble the parts.

After using it a lot more this year, Onshape has nothing compared to Fusion 360 when it comes to multi-part design and assembly.

In OS you have seperate tabs for parts and assemblies. Design a part on one tab, add it to the next tab which is no different from solidworks creating a part file then an assembly file (though you won’t have issues with file linking)
In F360 the part and assembly are in the same page. I noticed the pro/cons immediately when I created a simple symmetric wcd.

Anywhere you need multiples of the same part F360 > OS

I’m not dissing OS and we actually switched to it from F360, but we made the switch only because it’s online and has less features to learn but is still good enough for FRC.

The collaboration is definitely a plus and if something gets messed up, the history records every step in case you need to roll back. If two people want to work on the same mechanism with different ideas, you can “branch” the doc to start from the same spot then pick the better of the two.

It is not like google drive’s collaboration, more like Git-style version control. We usually put each member of the team on their own branch of the main document, and then merge once we as a team have decided who’s mechanism/part we like the most.

I believe what you are mentioning is also in inventor. I can derive a part and mirror or scale if I want to.

Ah I see. Our team has developed a way of doing this by making a geometry sketch that we use to get sizes and everything and then we base each individual part off of the sketch and copy over the dimensions we are using. I can post pictures of what I’m talking about if you would like to see how we do it.

You typically wouldn’t have multiple people working on the same part, but could have people adding things into an assembly at the same time.

OnShape also has versioning, so you can version your project and roll back if needed.

Not really what I’m saying. Mirrored and scaled parts are going to be different parts in any program.

What I’m getting at is there is only one file for the parts and assembly together on one screen and F360 still keeps it organized.
In OS, Inventor and SW you have to use separate files/tabs.

That’s great, and probably the way parametric parts should be done (via master modeling: https://youtu.be/LrPggPn5BB0). OnShape allows you to do the exact same thing as a “first class citizen” - without having to import a file-system linked part into your new parts. They have a feature called “derive” where you can do exactly the same thing, but linked to features of other parts and everything is file-tree agnostic.

F360 is still essentially any of the other CAD packages. Sure - it’s “in the cloud”, but you still have to download a tool and it’s not like the “google docs” for CAD that Onshape is. OnShape is cheap, has no versioning, accessible to anyone with a web browser or tablet, and has a solid WebAPI where you can run continuous integration tests like autoslicing parts labeled to be 3D printed and automatic FEA and robot kinematic tests as you model. A big plus - students without high-end computers can do things like rendering, FEA, kinematic modeling, slicing, and more on supercomputers rather than their school chromebooks.

So all of this is happening on the same screen

Created my drive base outline and first side 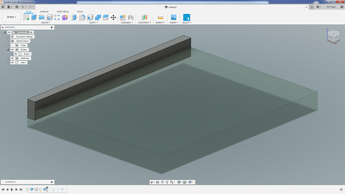 Copied that component around the center origin for the second side (these two parts are linked and changing one changes the other. Likewise, since the first component referenced the outline, if the outline changes, so will both sides) 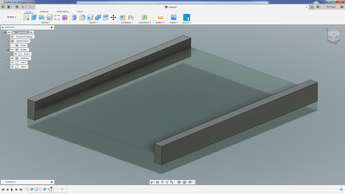 Now in OS to make this next part work properly. I created a sketch on the first side, extruded to the mid-plane, then mirrored it so that I know it will always reach the other side properly.
In F360 I created the sketch in the same place and just extruded to the second part. No extra steps. 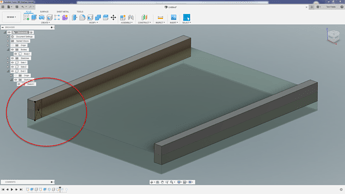 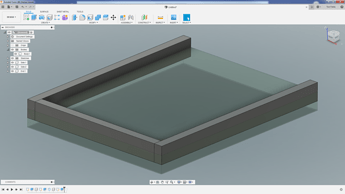 And again, copied this component where I wanted. 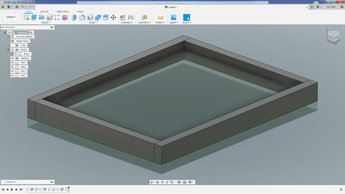 Now I can create a new component called bellypan and I have everything in front of me to work with.