In my current project I ran into some problems and I made a test print to bring them out and maybe some one expert in other slicers can verify that. Now I can work around that but feel it should not be. And also does anyone have a current link or way to pass this on to prusa so they can fix that (hopefully) so first the settings and pics. Its sliced and printed with a .8 nozzle the outside perimeter is set to .88 the inside perimters to 1.25 mm. The layer height is adaptive .2 to .4 mm The outside box is 70 mm squer and then 50 and 25 and 4 and the wall thickness from outside to inside are .8, 1.5 2.0 and 4 making a solid post in the center 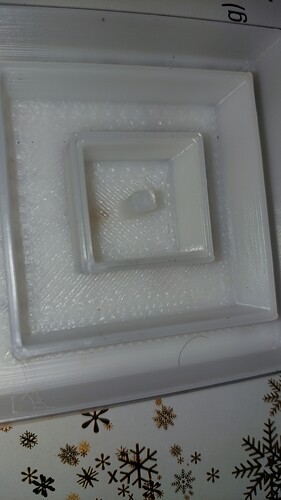 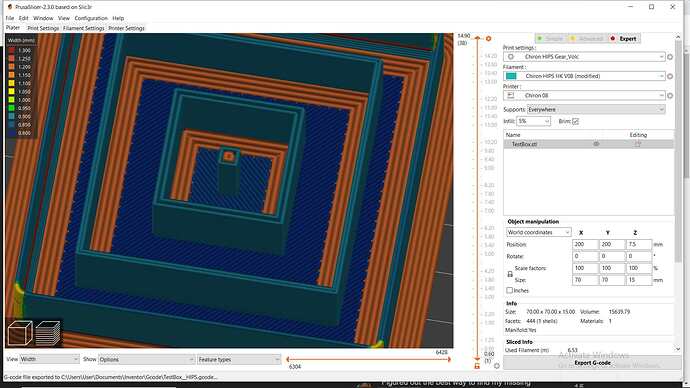 Now the 2mm wall is a mess as it is 2 ,85 walls with a gap in the middle and also prints as such It looks like it measures close to 2mm but its nearly impossible to measure properly as they are 2 very thin material walls and even slight pressure deforms them if you apply pressure until they touch you get something close to 1.7mm. So it seems again as the slicer/printer relation is dead on but from a mechanical standpoint its BS as you can stick a finger nail between the 2 walls that sb as solid wall.

And then lastly the part sb 15mm tall but its sliced to a tallness of 14.9mm. especially with adaptive layer height it should calculate to come to 15mm. Now the 14.9 is sometimes as little as 14.7 and that makes compensating for the first layer very difficult. As for example I print a .6mm first layer that due to squish comes out to .4 and so I compensate .2 which is then off as much as .3 due to slicer error. Now on a part with one top like this open box I can compensate for that in design but for one that has a top at lets say 15mm and another at 31 and the 15 is at 14.65 and the 31 ends at 30.9 so that becomes more difficult and even more problematic the more complex the part is.

Now changing the advanced slice parameters to outside perimeter 1mm and inside 1.5 mm Makes the .8mm wall .8mm and the 1.5 to 1.6mm and the 2m to 2 closely placed walls of 1.3 mm each and the 4mm post hollow with a 1.3 mm outside wall. leaving a 1.6mm square hollow center 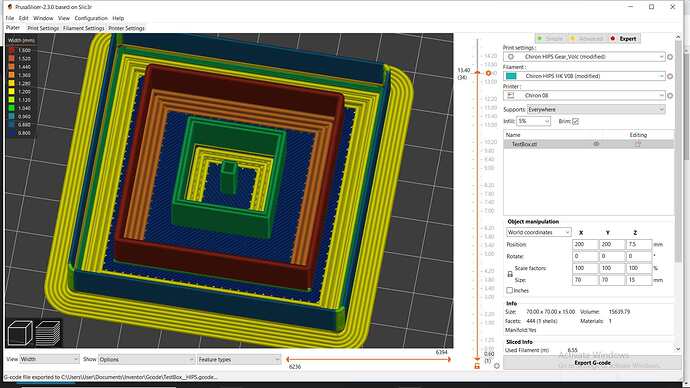 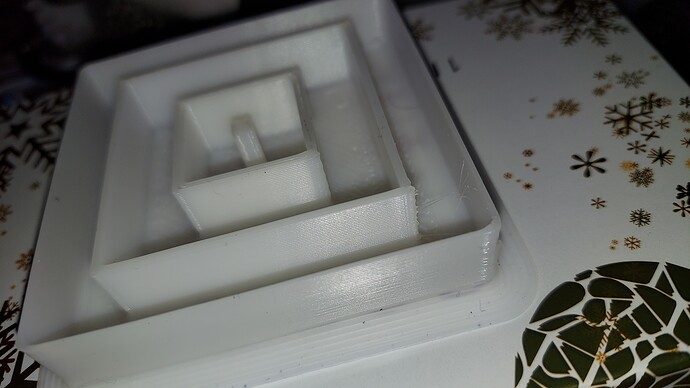 Now the .8mm wall measure in at .79 to .82 so is a pass IMO and on that one everything fits and it show that PS can reduce a perimeter size from the set value (in this case 1mm
The 1.5 (I might have gotten the color wrong I am color challenged) measures in at 1.49 toe 1.53 so that is within .04 mm and I am happy with that too
The 2mm wall is now solid so that “hack” (changing parameters) fixed that even thoug the 2mm wall measures in now at 1.81 to 1.84 which is of IMO quite a bit - too much.
The 4mm post in the center measures a 1.1mm wall 3.72 mm overall with a “nice” square hole in the middle of a about 1.7mm square.

The Stl and file is called testbox and is located here https://grabcad.com/library/frc1989-filament-dial-in-1
The printer seems to be pretty well dialed in as the measurements compared to the slice plan show (not the initial model) and the pics look decent too

You can see the seam on the right but the walls look pretty good
Material is HIPS.

I don’t have a solution for this specific issue, which seems to be squirrely behavior as the dimensions of your features stray from integer multiples of your nozzle diameter, especially at low multiples. Essentially, it’s a “resolution” issue. What I can say is that you can work around this issue by using a smaller nozzle size. I know that’s not the answer you want, and will mean longer print times. But, if your goal is good prints without so much aggravation, give it a shot.

My experience is that when my features approach the nozzle size, results are iffy. There is a certain magic multiple (for me it’s 4-5 or so) where my results go from pretty bad to surprisingly good. That means that if I wanted really good parts that have 1mm walls I’d use a nozzle size of .20-.25 mm diameter. With my .40 mm nozzle, 1mm walls are meh. 2mm walls are awesome.

The way I see it is I can spend my time fiddling with the parameters trying to get good parts from a large nozzle, or I can switch to a smaller nozzle, take longer to print, but get way better parts. For me, it’s not a hard choice.

Thanks Todd in the meantime I tried Superslicer which is wonky too but in a “better” way and I found both their github sites and filed a report.
As for smaller Nozzles. I can see that but it also does not make the problem go away it just changes the resolution and you “trade in” other head aches besides the much higher print times. Namely first of all the bigger the nozzle the stronger the part - especially when it comes to layer adhesion in particular also to perimeter adhesion. We are not printing models but actual parts this was detected printing a planetary I posted in another thread Testing Plastics
I know I can work around it by playing with the slicing parameters. I posted it here to a.) let CD ppl know of that potential problem and B.) have a link which I sent to prusa slicer tech support (who then pointed me to their github)

Superslicer will do it more correctly so is about 50% better in this case but will drop the outside wall unless one sets the outside perimeter to less than the wall thickness of the outside wall. IOW if one would combine both Prusa slicer and superslicer which are both based on SLIC3R then the problem would be fixed so as both are open source I now posted this on both githubs with a suggestion to take both slicers and “shake well to combine”