Question about Developing a Scouting System

I’m a 2nd-year scout lead for team 4255 and a first-time forum poster. We have a very small team (~15 students) but we’ve tried our best to develop a functioning scouting system and it’s really helped with strategy. Our size has basically necessitated we scout with other teams, and we’ve run scouting alliances at the two competitions we attended, with varying degrees of success. We’ve been using Google Forms (on cell phones) for data input and a Google Sheet for stat calculations and data visualization (formulas and fancy formatting). After scouting in 2485’s scouting alliance at Houston champs this year, we have been inspired to create our own scouting system that we could test this off-season and adapt for 2020 as easily as possible. 2485 used an HTML website that also imported into GSheets (with even better formulas and fancy formatting), and we were inspired to try something similar, as a website allows way more freedom for input interface design than a GForm. Does anyone have in knowledge on how one might import data from a site into Google Sheets or advice for versatile scouting systems?

I know 5148 had a freshman this past year develop something similar to what you are describing. Should’ve grabbed his contact info but you can contact them on their website http://team5148.org/contact-us

Best of luck, scouting is a labor of love but the payoffs for a good system and analysis will pay dividends at your events.

4513 works with a similar number of students, and also does scouting alliances. We have our own app which is essentially a formatted Gsheet that gets turned into a form-like app using Appsheet. It worked offline just fine for data entry/export as it all went to the same gsheet that can be copied or shared.

As for analyzing, you really cant go wrong with Tableau. Once you get the hang of it, stuff like this can be made in minutes without complicated code, and even this is pretty basic. 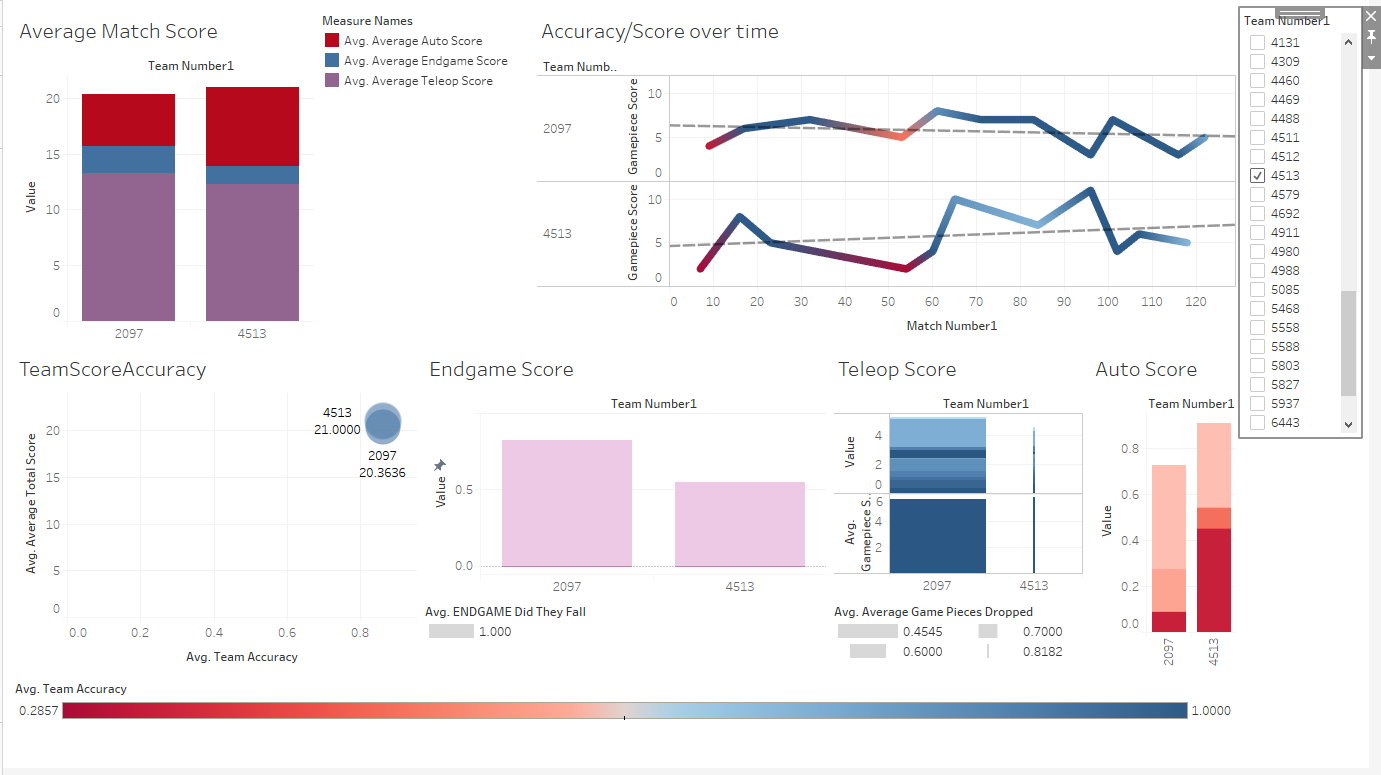 Thanks, I’ll make sure to ask them about it!

I’m going to make a plug for AppSheet because it was the most effective simple way to create an app which interfaced directly with google sheets. It’s kind of like google forms on steroids plus a lot of extra visualization abilities. It has a bit of a learning curve but it was so easy to make a user friendly app with lots of features in minutes once I got how to use it. That in combination with the formulas and scripts we were running on the actual Google sheet was a powerful tool in developing an easy use and informative scouting environment for both data collection or data entry and drive team access for match strategy planning. It also didn’t absolutely require a data connection to function, we could sync all the data when we got to the hotel instead.

We created an application for phones that allowed us to scout. Having only 10 students at states, we were still able to scout (and cheer) nearly every match. If you are interested in what we used, send me a pm, but I’m going to focus on the basics for starting scouting.

Keep it simple
Teams get caught up in making super complex scouting sheets. This results in tons of data that often turns off all but the most hard core scouters. It will be less accurate because it’s harder to put in. Many times, even if you do successfully input tons of data, it’s only the very general stats you base your decisions on. The biggest advantage to in-depth data in the last 4 years was probably in 2016, when heat maps gave you an understanding of where a team had to score. Otherwise, it’s tons of work for little reward.
This year (2019), we had a drop down for match number, team number, start position (1 or 2), and end game climb (1, 2, or 3). There was a plus or minus for cargoship hatch, cargoship cargo, rocket hatch, rocket cargo. Inputting data should always be easy. That’s why we choose the above. It created a fast interface for scouts to enter data with ease.

You don’t need a programmer
Our scouting app was made by all non-programming members of our team. We have on 2 programmers, and they were busy tuning PID loops for the drivetrain. This should show it’s not death to make an application. Our team use MIT app inventory, which is block based coding. Before people start screaming about block based, please remember it’s an extremely good resource for beginners. The coding interface not only allowed us to create the software, but also easily download it as an app. The Bluetooth connection to the main computer was a little harder to do, but if you want help, we are always will to provide assistance.

Your team isn’t only students
FIRST isn’t a student only competition, so why should your scouting be? If you are lower on members, recruit mentors to help. Also, don’t be afraid to ask parent who are already there. If you followed the above steps, our app should be easy enough that if you walk a parent through one to two matches, they should be able to also scout. This also gets parents more invested in robotics, since they start to critically understand the game and know what to look for in a good robot. It allows students of a smaller team to have scouting, compete in the other fun parts of the competition, and make sure your parents/mentors are engaged

I hope my insight helped some, as I’ve said, feel free to reach out. Good luck in your journeys!

Hey, I’ll also make a plug for AppSheet. It’s cross-platform - anyone with an Android, iPhone, or access to a web browser can use it. Caching data and syncing it later is a necessity at competitions, since you can’t use Wifi and cell service is generally spotty. I was even able to import photos from AppSheet into the Google Sheets it was hooked up to, which let us take much easier notes on other team’s mechanisms.

Our data analysis was done entirely in Google Sheets, using only the built-in functions. It updated as scouters synced their data, so we never had to regenerate graphs. Here’s a link to our data and graphs from our two competitions. On the side are graphs that one of our mentors generated in R.