Thanks to not being able to do any typical robotics activities amidst this pandemic, I’ve been working on fleshing out some concepts that I’ve had kicking around in my head for some time now. After seeing all the advancements that teams are making in the wheel department, I was inspired to come up with a concept that would solve some of the issues that we faced with our drivetrain wheel selection.

For some background 1923 has traditionally built 8 or 6 wheel tank drivetrains. Starting in 2019 (probably should have done this sooner) we made the switch from parallel plate to WCD. After making this switch we immediately loved the ease with which we could swap wheels, both for testing new wheel configurations, and for routine maintenance. One thing that we did not love as much is that when swapping wheels it was relatively easy to lose spacers, or have a belt slip off it’s pulley, etc, which made wheel change over times longer. Also we had a tendency to choose wheels that gave us good traction, but would wear easily leading to the need for more frequent swaps.

Based on these concerns I came up with the concept for a two part wheel where the robot side half is permanently attached to the drivetrain and the outside half is held in place by 6 bolts. The tread in this setup would be an injection molded part which has a circular t-slot profile interrupted by blocks which transfer torque from the wheel to the tread. The wheel can be opened up with the 6 bolts and a new tread can be effortlessly swapped in. With some practice and an torque limited electric screwdriver, tread swaps should be quick and easy.

Here are some images of the front and back of the wheel, a cross section showing the method for retaining the tread, as well as some other views to help visualize the concept. Note that the tread pattern is for illustration only and likely not optimal in anyway. 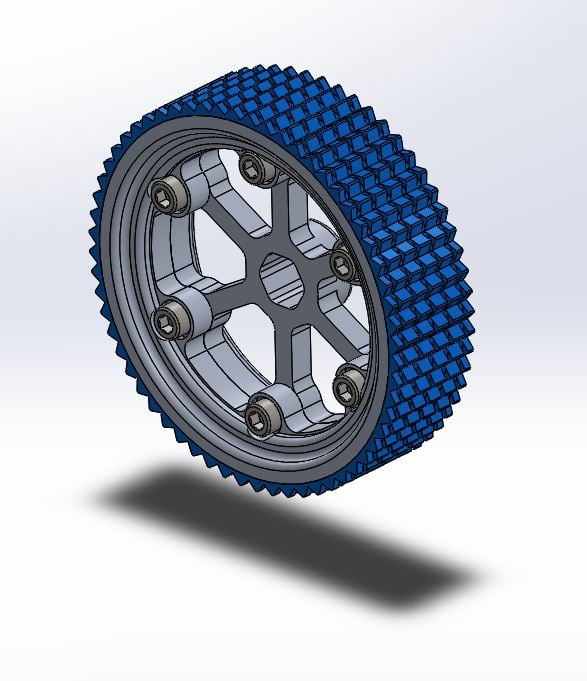 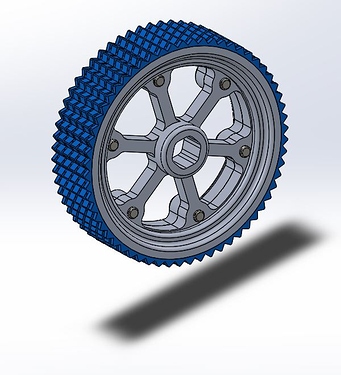 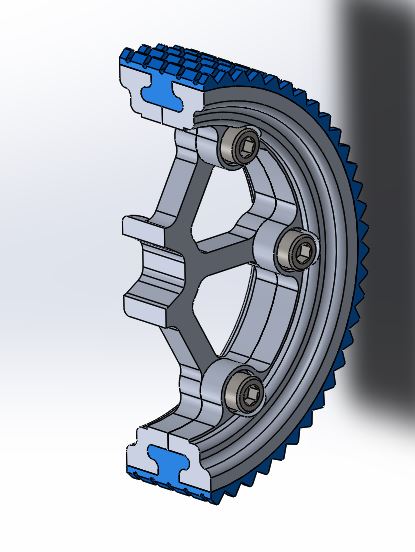 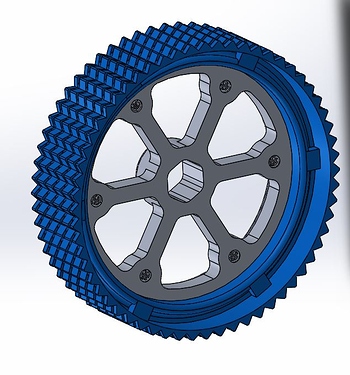 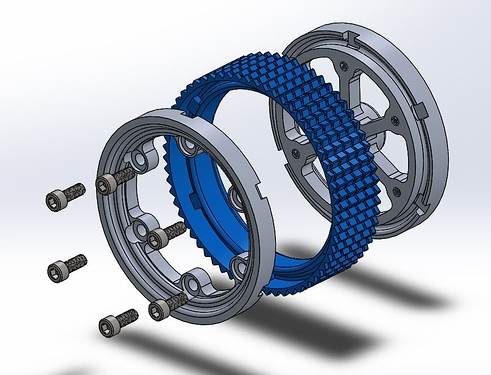 Currently this is drawn as 1 inch wide, but theoretically, using a different molded tread and some shim plates you could make this as wide as needed. I do not have any plans to currently make this other than perhaps printing a prototype on the Markforged I have access too.

Sarath (or another 1923 member), what was the process you followed for swapping wheels in a WCD? Aside of possibly losing spacers, as you mentioned, I haven’t seen the other issues you’ve described. I feel like having to swap 6 screws in your design would be more time intensive than only having to swap a single screw on the axle to swap entire wheels.

Still a cool concept, even if its trying to fix a relatively minor problem.

This is similar to what Vex Versa wheels do.

I will start off by saying most of the issues we faced with swapping wheels were highly self-inflicted. The worst issue was when we were swapping a wheel off of the gearbox shaft, we managed to accidentally back the shaft up enough to have some gears fall off the shaft. While completely avoidable this mistake cost a lot of time. Additionally we often have issues with people (myself included) forgetting to reapply Loctite to the retaining screws leading to sometimes hilarious issues where a wheel will just fall off while driving. This has not happened in a match before but several times in practice.

Like you said mostly a just a cool and overcomplicated solution to a silly problem!

Yup, the concept is pretty similar, I think this idea is a bit more optimized around the desire to replace tread without removing the wheel, while the versa wheel is much more universal.

One solution I’ve heard of for the problem of spacers and shafts moving when switching wheels is to use a light-duty clamping shaft collar as the last spacer before the wheel. That way taking off the wheel doesn’t allow the shaft and spacers to move freely because they’re still constrained by the axial tapped bolt on one end and the shaft collar on the other. I’ve never actually used it myself because we’ve never really had a problem with this but it seems like a simple solution.

Additionally we often have issues with people (myself included) forgetting to reapply Loctite to the retaining screws leading to sometimes hilarious issues where a wheel will just fall off while driving.

I highly recommend standardizing on a 1/4" screw with a nylon patch for all tapped shaft ends. Something like https://www.mcmaster.com/92360A310/.

Toss and replace each time you remove it. They can be reused several times but it is hard to keep track of which ones have been reused.

Agreed that either this or Ricky’s solution above are the way to go for the actual problem we were facing, and would likely be what we actually implement since we don’t have the resources to make a wheel like this very easily anyway.

forgetting to reapply Loctite to the retaining screws leading to sometimes hilarious issues where a wheel will just fall off while driving.

I’m curious, does any one use a drilled axle and R-pins (or similar) as a positive means of wheel retainment?

In 2019 we’ve used a similar method to the AndyMark performance wheels, with a zip tie going through both ends of the tread and hooked onto the wheel near the hub. We changed the design a bit, making the notch the same width as the treads so that we could tighten it using the zip tie, and having the ziptie hook onto a bolt instead of twisting around into a hole. Replacing all 4 treads took less than 40 seconds for two pit crew members. Treads never came off(except for one instance where the hole on the tread was drilled way too close to the edge) and the bump where they enter the wheel wasn’t noticeable at all. 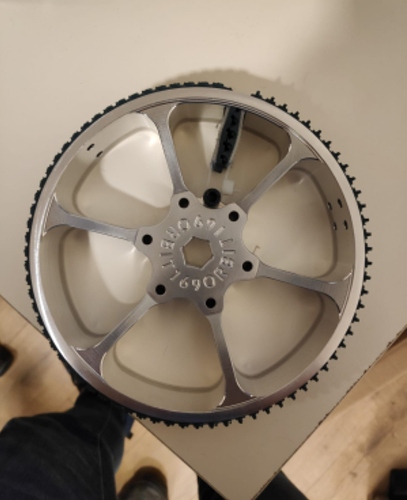 This is very similar to the tread concept I have been playing around with on the latest version of my swerve module. I like the feature you built in to be able to take one half of the wheel off to swap the tread while keeping the wheel on the shaft.

In your post you said the tread would be injection molded. Are you actually planning to make that? How are you justifying the tooling cost of molding it? I am currently playing around with 3d printing TPU filament for the tread on my swerve version.

Last year (2019) we 3D printed our traction wheels, and designed them with holes for 8-32 screws at regular intervals, on the inside of each of the holes is a slot for an 8-32 nylock nut. The tread is held in place much like how a wheel with riveted tread would be, except instead of rivets, it uses screws.

To change the tread, all you have to do is unscrew the 4x-5x screws holding it in place, replace it with another piece of tread that’s already been pre-drilled (since the holes are the exact same on every wheel, you can use a template), and screw it back on.

This is particularly convenient if you’re not using a WCD since you can replace the tread relatively easily without removing the wheel from the shaft.

Toss and replace each time you remove it.

Is it bad that we reuse but never really replace the nylon unless visibly worn down?

I wonder if there would be a market for a cast-your-own version of this? Someone could sell hubs with standard interfaces, outer moulds with various tread patterns, and be a distributor for various casting resins in a variety of durometers. Customers could pick the resin, customize it with something if desired (soft rubber chunks in high-durometer matrix? why not?), and cast their own into the wheel so the T-slot is captive. If they don’t like the properties, they can try again with a different compound.

(To cast directly into the T-slot profile, there would probably need to be some riser holes to avoid air pockets.)

An L rather than a T should hold fine with some compression in the design, and lets you skip the risers on the mold.

This overall sounds like selling a science experiment rather than a competition product though, which is risky.

You could also cast it in a different orientation to avoid the risers.

However this process is a bit outside of my wheelhouse, so there may be reasons not to do that.

I’ve been toying around with the idea of making a cast polyurethane version or perhaps 3D printed polyurethane version just as an experiment. I suspect the cost benefit on this is not very favorable unless this became a production part that was made in large enough quantities to justify the tooling and even then probably need to prototype via casting or printing before committing to a tread pattern/design and making a mold.

After spending some time actually thinking about how to make this concept much more economical/scalable, I came up with the following revised concept. Same type of structure in terms of the two part wheel hub, but the tread will be waterjet from whatever 1" thick rubber/TPU/Neoprene/SBR is deemed to be optimal. The tread will have alignment and torque transfer nubs that will interface with the two part wheel hub. Overall weight as shown is .65 lbs per full assembly including hardware, though I’m sure that can be further optimized. 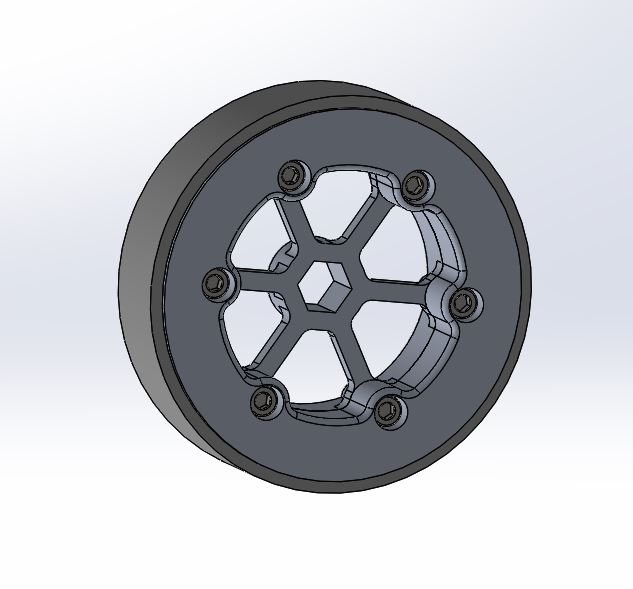 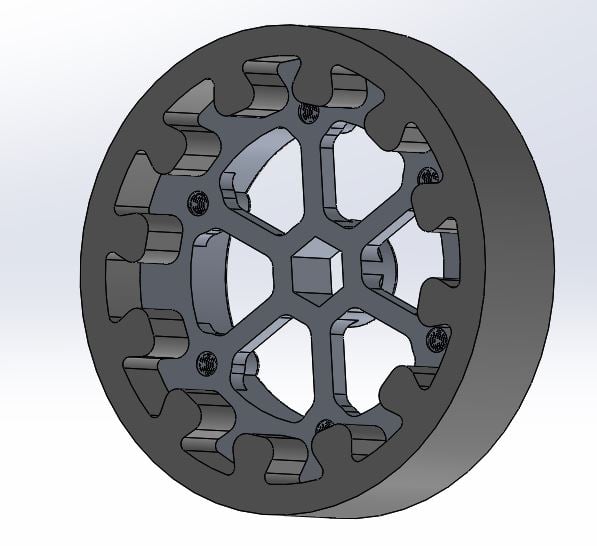 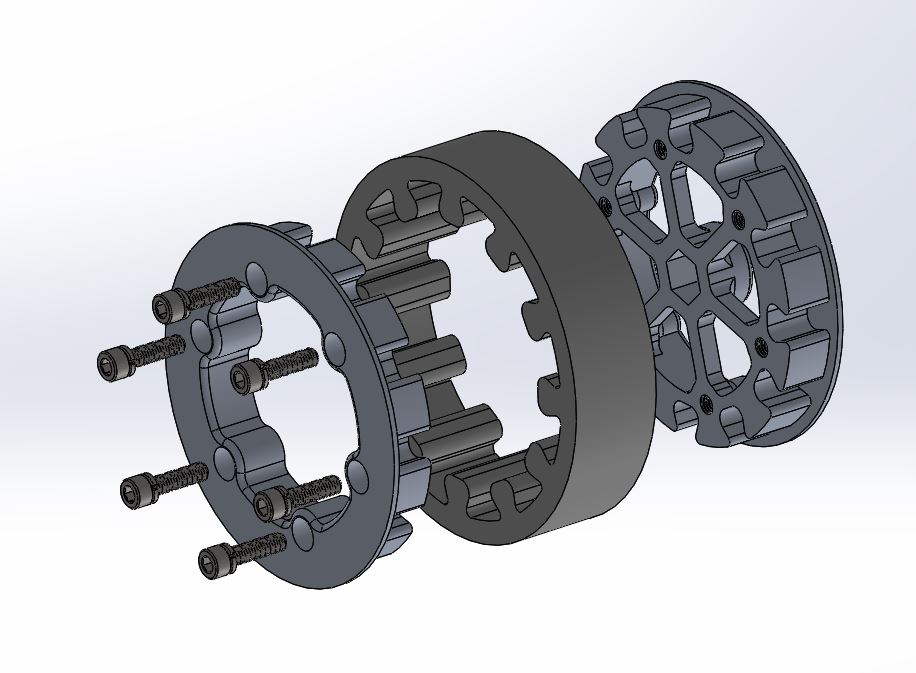 I think this greatly simplifies the concept and shifts the cost-benefit ratio to a more favorable position. I’m sure there is also a lot of room to experiment with different durometer treads and different tread patterns as well. I’m also fairly confident that with some geometry modification/optimization to the part that interfaces with the shaft, the wheel hubs can be 3D printed on a Markforged. This would likely require thicker spokes, heat set inserts for the screws, and a metal insert for the hex shaft interface.

This also solves, in my eyes, a potential problem with the T-shaped slot - rolling of the tread when the wheel is pushed sideways. A molded or all rubber part without the hard backing that comes on a nitrile tread is likely going to want to lift at the edges when its skidding perpendicular to the floor. Over time the rubber could even stretch to a point where the edges of the wheels are loose.

The new version will do a much better job of keep the the tread flat against the wheel.