with falcons, what is the quickest robot that could be built? (fastest time to dash from one side of the field to the other) what wheels, treads, gearing and transmissions would be best? how many motors it to many? what equations do you use to calculate those factors?

Here is a simulator that will let you play with some simulations to see how fast you could theoretically go:

introducing this year’s ILITE Drivetrain Simulator. Not only have we incorporated more elements about how ILITE designs our drive trains, I’ve included several rounds of feedback I have received from many teams across FRC. ILITE-DriveTrainSimulator.xlsx (3.0 MB) Input a target motor, number of motors, and over 25 other elements about your drive train design in order to see more characteristics, charts, and design tradeoffs than ever before! Furthermore, there is more emphasis on the KOP drivet…

Big limitation will be the traction on your wheels. Second biggest issue (I think) will the the current you can apply before blowing your main breaker.

replace the x drive with a west coast, falcons instead of cims, use bent sheet metal, a CVT and minimum electrics and you have a speed demon

Awe… But is it actually a kiwi drive?

That thread it true CD history and is worth the fun read.

While it’s a lot of fun to speculate about how fast you could go, I think the important question is almost always “how fast should we go?” Our IR robot had a shifting gearbox and the high gear position gave as a max speed a bit over 20fps. That was so fast that our second string drivers were afraid to use it much of the time and even our first string drive team didn’t use it very much. When the entire field is 27’ x 54’, being able to get from one end to the other in less than three seconds is probably about as fast as most drivers can handle.

In real life, I think this would be a terrible idea for most games, and this one is no exception.

Do you plan to stop at the other end of the field, or get there in the fastest possible time?

In general, stopping at the other end of the field at max speed seems to happen a lot.
There’s a reason for driver station walls. 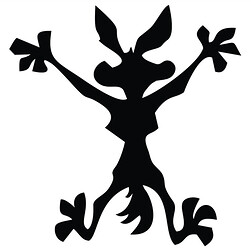 Here is the lowest I’ve been able to come up with. Some of the thing’s i’ve assumed:

-robot dimensions are going to be 50"x10". Sure the robot can’t turn, but that’s not needed for your sprint. Longer robot: less distance you need to sprint. That means You only need to go 45ft before you run into the driver wall.

-You have a perfect battery. If not, you are going to brown out. You are probably going to blow your main breaker as soon as you hit the wall, but that doesn’t really matter.

-Your wheels have a 1.2 Coefficient of friction. Probably achievable with brand new blue nitrile

-You made ultra-light bumpers at only 3 lbs

-Your robot only weights 15lbs.

With those (insane) parameters, You could theoretically get across the field in 1.7s. And hit a top speed of almost 50fps (34mph).

It may be possible to get across faster, but this was what I could come up with by just playing with the parameters.

Any thoughts on the impact a 35 pound robot at 35 MPH might have on the DS wall?

Seems similar to a fair whack with a sledgehammer. Or a full grown coyote at top speed.

Remember the robot has bumpers so that is going to increase the time of the impulse and decrease the impact force.

Fastest actual competition robot I’ve seen personally and to my knowledge was 5458 in 2017. I believe they were geared to 28 fps 6 CIM and 80 pounds total WITH battery and bumpers. We timed some sprints at 1678’s shop and they were going over 20fps by the time they hit the half field line. Many robots that tried to play zone defense on them found out very quickly if there was loose wires somewhere in their bot. Would have paid good money to see that robot competing with Falcons…

Edit: Fun fact: It is impossible to fit 3 CIM motors close enough to engage a central gear at that gear ratio for a 4 inch wheel using typical WCD layout. Had to use an idler gear on the top CIM to transmit power to the central gear.

Robowrangler’s Kolibri from 2021 uses swerve drive and is wicked fast.

The Robowranglers are proud to present our 2021 robot, Kolibri. [Robowranglers 2021: Kolibri] Huge thank you to our sponsors, Greenville ISD, Innovation First International Inc., and L3 Harris, for their unwavering support during this unprecedented season. #AllBlackEverything #TeamIFI #TSMFC

the robot has bumpers

Three pounds in that bumper. Not certain it will pass inspection, since it is difficult to imagine wood with the density of styrofoam will be considered robust (R408-A). But if it does, it will likely fail to absorb much energy in the DS wall collision. The real impact will likely be less than the sledgehammer, and more than the coyote.

That checks out to me.

The lightest bumpers will only cover 6" on each corner of your robot. So, if you are trying to minimize the weight of your robot, you will use 8 pieces of plywood that are 6"x5". So total, I calculate you will need .1ft^3 of wood.

From this site I find the density of white pine to be as low as 22lbs/ft^3, so I can get the wood part down to 2.2lbs.

So then I have .8 lbs for some noodles and a mounting system. Certainly challenging, but I think you could get some 3 lb bumpers through inspection.

Or…make your robot a triangle… That gives a little more room.

Or…make your robot a triangle… That gives a little more room.

And gives you a nice point to run into that driver station wall. I think we’re back to sledgehammers again. Though the coyote in question did have kind of a pointy head…

Don’t forget to factor in the battery and control system in your calculations. That’s about another 20 lb.

Then stack as many of the best power/weight motors and controllers in the drive as you think you can get away with. Good luck…

The point is on the back of the robot, silly!