Would the distance of greater than 8 inches between our bumper mounts constitute a violation of ruler R26 or do the wheels count as “frame”. The bumpers are being attached to the front and back 3x1 aluminum tubing and the 2x1 tubing held by the hands. This is a side profile of our drivetrain for reference: 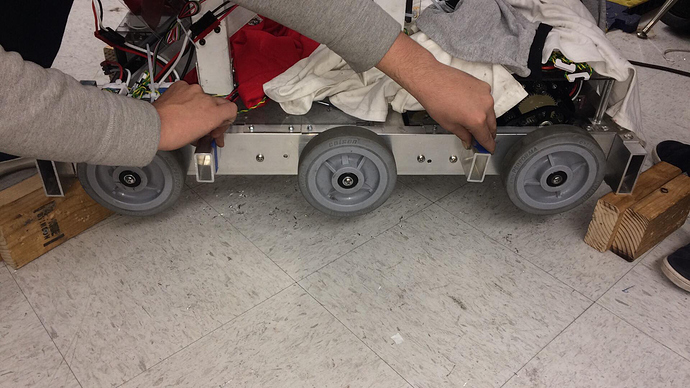 Your wheels do not count as frame, thus you would be in violation of R26.

Understood. Thanks for the clarification!

Just to add a little detail, wheels do not count as frame because they move - R1 requires your frame perimeter to consist of “fixed, non-articulated frame members” within the bumper zone.

Plus, you really don’t want your wheels rubbing against your bumper

As has been noted, this would be a violation of R26. Fortunately, it’s an easy fix. Go ahead and install the 2x1 tubing as intended, then attach flat aluminum bar stock between the four tubing ends. That will give you a “fixed, non-articulated frame member” at your frame perimeter and satisfy the requirements of R26 while not adding too much weight or mass to the frame.

Another easy fix is to add two more of those short tubes per side, moving each up close to the wheels. (I’m assuming those wheels are smaller than 8"; they look like 6’s).

Another possibility would be to have bumpers only on the corners, and leave the gap around the center wheel totally open. Again, I’m assuming the two offsets nearest each corner are less than 8" apart.

If they add the bar stock carefully, it shouldn’t actually increase their frame perimeter. They might have to inset it into the 3x1 tube at the front and back if they’re really at maximum, but that’s not actually that difficult. Hopefully, they’re at at least a little under maximum (which is always a good idea, as we know), so that they won’t even need to do that. As it is, the frame perimeter follows the same line as the bar stock would anyway.