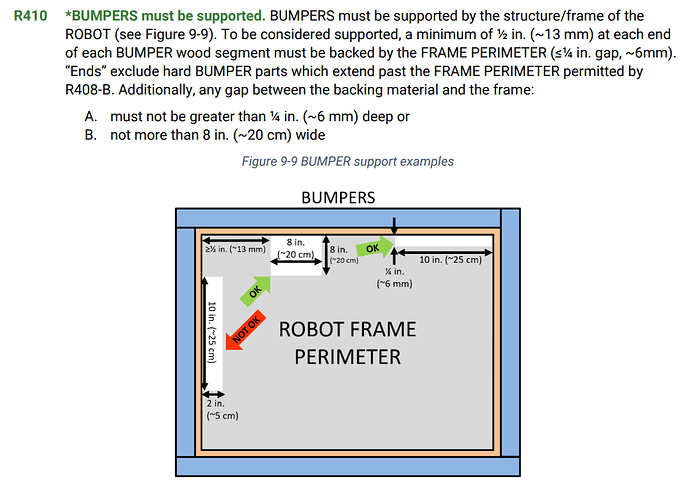 As I read R410, there must be a part of the frame that backs the bumper for at least a length of 1/2" within 1/4" of each corner of the frame perimeter. However, figure 9-9 shows a gap in the top right corner that extends all the way to the corner of the frame perimeter without 1/2" of support within 1/4" of the corner, and it labels that OK. If you look at the same rule from 2020, the text is the same and image has that corner supported 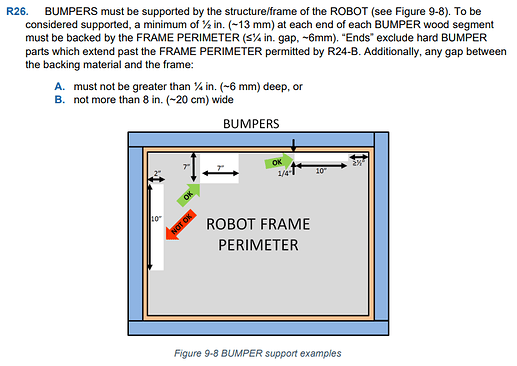 I wanted to check here if I’m missing something before opening a pointless Q&A. Does anyone have a different interpretation of the rule that would make this make sense, or is it something for Q&A?

Q&A it. Looks like they may have changed something without updating the rule properly

There was a similar change to pictures for the extensions rule. When it was brought up in Q&A, the graphic was updated to match what we’ve seen in the past.

It looks like something dropped off of the graphic this year and wasn’t caught. If you throw up the Q&A question, I expect the next team update will include a corrected graphic to match what we’ve seen in years past.

I don’t think that the ≤1/4 in. gap is in reference to the distance from the corner, but rather, the distance between the FRAME PERIMETER and the BUMPER wood at the corner. I.e. any distance of 1/4 in. or less is small enough to be considered backed. We see a similar requirement, albeit phrased more explicitly, for mid-bumper gaps in R410 A.

Figure 9-9 would be consistent with this interpretation, because that 10 in. wide “gap” at the top right corner is only 1/4 in. deep. Thus, it would be supporting the BUMPER along that entire length at the end.

Definitely worth a Q&A ask.

I actually like this reading and think it’s a matter of poor scaling on the graphic above.

It’s likely the image is trying to show you don’t have to be FLUSH but you should be pretty tight there. But, by breaking the scaling it looks like it’s saying you can design with a rather large gap along the corners.

To hop onto this thread, is there a requirement that says that the full 5" of the bumper height needs to be supported?

Example: EVerybot and KOP chassis looks like there is a 1.5" vertical gap where the bumper is not supported? 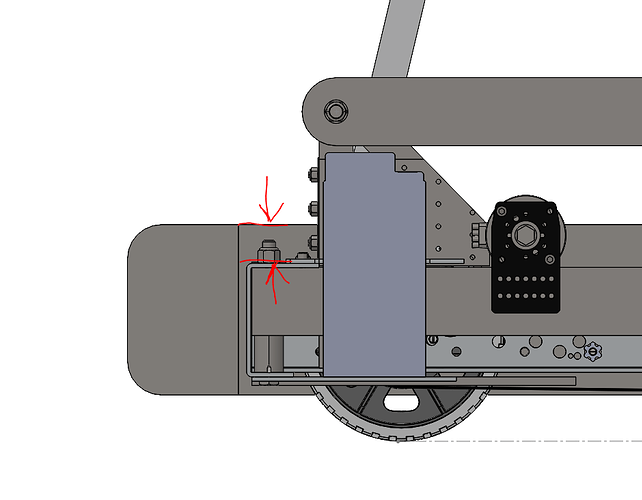 As I read it, the parentheses at the end of this sentence

mean that a ¼" gap is acceptable, even at the corner or end of a bumper.

To hop onto this thread, is there a requirement that says that the full 5" of the bumper height needs to be supported?

Definitely not. Just somewhere within the bumper zone.

So I can put an 1/8" piece of aluminum against the wood and that will be considered supporting the bumpers?

Not that I would, that just seems counter intuitive to good bumper support.

As long as that aluminum is part of your FRAME PERIMETER, yes. And agreed.

I have seen solutions that are similarly “non-optimal in structural terms” pass inspection after significant deliberation between several R.I."s and the L.R.I determined that it met “the letter of the law” but “not the intent of the law”.

In case anyone else was interested, the question was answered a few days ago (but the email notification went to spam so I just saw it now)

The gap refers to the separation between the FRAME PERIMETER and BUMPER, similar to what is permitted per R410-A. That’s correct, any gap less than 1/4 in. is still considered “backed” and could run all the way to the corner as shown in Figure 9-9.