I am Yuval from 5951, and we are trying to config our new router.
The radio firmware updates succesfully, but we can’t config the router to our team.

Some background -
We’re in israel and using the israel firmware
We’ve used three different radios, and four different computers
We’ve dissabled all other WIFI and Ethernet ports
We’ve run the program as admins
We’ve Configured routers before, but everything we do seems to fail now

Thank you in advance, Yuval

Make sure you disable all other Ethernet / WiFi / Network on the computer EXCEPT for the one you are actively using.

Is the issue that the radio won’t image with your team number, or that it won’t work with your roboRIO?

The radio won’t image with the team number

Is there any errors reported by the radio configuration tool?
Can you share the error you are facing (a screen shot can be useful)? 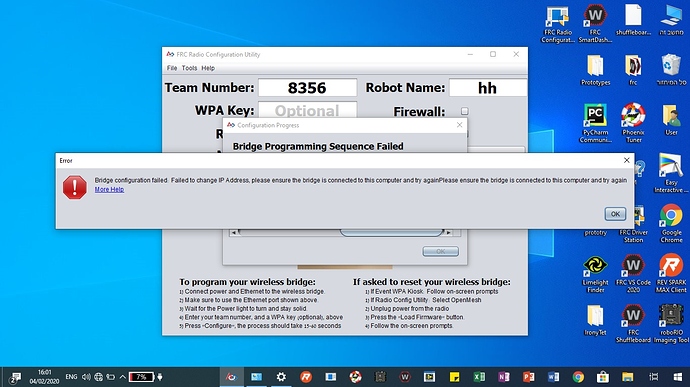 Can you also screenshot the IPv4 settings of the network adapter you use?

I would make sure the radio is powered and talking with the computer before beginning the programming sequence. This means a solid power LED ~45 seconds after applying power. It looks like when the screenshot was taken, there is no active network adapter (globe with cross on it in the menu bar).