You probably know where I’m going with this…

Just some basic data to get us started. We’re all pretty active on opening day.
As it was last year, it looks like Michigan [strike]and Seattle[/strike] won’t be publishing their team lists right away.

According to Bill’s Blog on 9/23/11, 341 FRC teams completed the pre-registration in TIMS almost a week before real registration opens.
A week earlier (9/15) 195 teams had completed pre-registration and 69 rookies had entered the system.
As of Tuesday (9/20) I’ve seen temporary rookie numbers as high as 2012152 (reportedly starting at 2012000), meaning at least 153 rookies are already raring to get going.

Now I know the 2012 season has officially begun. Thanks for doing this thread every year Mark.

Hey Mark, will you be able to update us as to who signed up for what MAR event? I couldn’t find a list anywhere. It wasn’t on the list of regionals last night

Edit Nvm they are posted now.

The response of FIRST’s servers appear to be under performing last year, or that many more teams are interfering with one another.

BAE was full by the end of the first hour.

The graph has the early returns on total # teams. Blue was 2011, Red is 2012. (graph updated at the end of the first day of registration)
The slower rush might be due to the holidays observed in some areas. 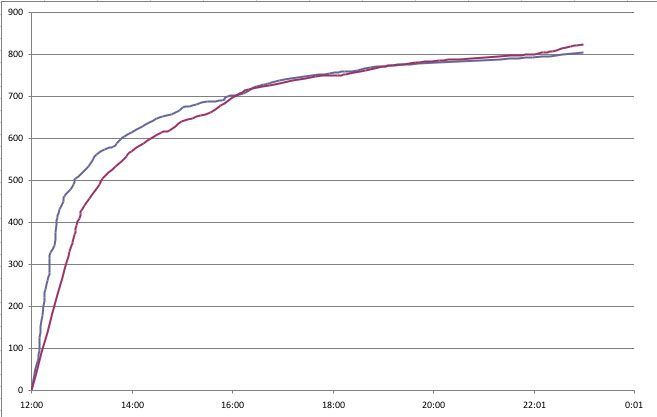 I don’t know if it was the first tournament to fill up, but the BAE Systems Granite State Regional was full (before the wait list) with 40 teams at 12:53 ET.

BAE was indeed the first to fill, closely followed a few minutes later by WPI, although WPI only opened for half the number of teams that BAE did.

or looked at another way, here is subscription as a % of initial capacity:

I don’t know if it was the first tournament to fill up, but the BAE Systems Granite State Regional was full (before the wait list) with 40 teams at 12:53 ET.

Ken, did your team make it in?

Ken, did your team make it in?

For person-to-person communication such as this, sending a Private Message is usually better than posting in a forum thread.

For this particular question, however, the answer is readily found by looking at the list of teams registered for the BAE Systems Granite State Regional. Team 1519 is indeed on the list.

Mark,
We all know you’re a data junkie, but thanks anyway for posting this thread.

Its also nice to see Team 190 coming down to play in Florida week 5 at FAU.

Nice to see 176 continue their affinity for Canadian events by signing up at Montreal.

Nice to see 176 continue their affinity for Canadian events by signing up at Montreal.

Yes. We are looking forward to going over the boarder once again.

Yes. We are looking forward to going over the boarder once again.

Hmmmmmm. Who could that be?

Right now of the 5 MAR events, Mount Olive (woot hometown love) looks to be the toughest to play in. The other 4 look to be at a fairly even level of competition. The powerhouses spread out decently enough, I think.

Cannot wait for this season to start. We’ll be playing at Chesnut Hill and Mt. Olive. Should be sick!