do the old style Mini Breakers still work on this new system?

Yes, the Snap Action VB3 size breakers (30A and below) will work in the PDH.

Here is a size comparison for the Power Distribution Hub. One thing to note about the additional length is that with the PDH you only need wire access on 3 sides of the device which can also impact total footprint on the robot.

The development of the ATO 40A Breaker allowed us to keep the size increase to a minimum while providing the extra channels. 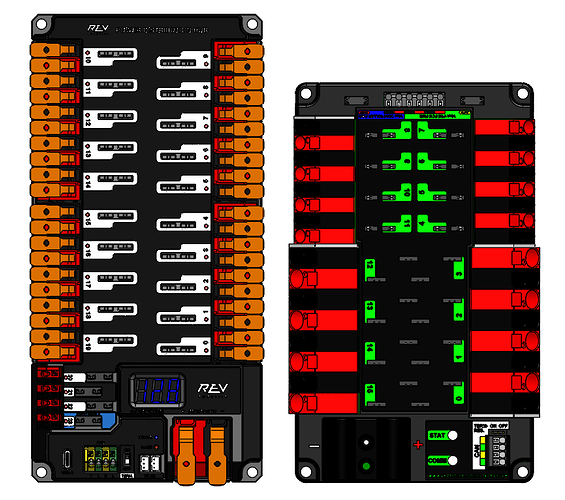 On the Pneumatic Hub vs PCM comparison, our device is bigger, but from a functionality perspective you would need to compare the PH to two PCMs due to twice the output channels. We made this decision based on feedback from teams that would prefer to use double acting solenoids which forced people to use multiple PCMs on their robot.

Thank you for the update and all the work that went into these devices. I think they are going to be a vast improvement. I am especially excited about the prospect of using USB control with the pneumatics module. It will be nice to be able to test subsystems and programming seperately (this was possible before, but not this easy or cheap).

Re: The kitchen sink argument. I feel there was a plateau for young teams with respect to offboard processing, and this could bring it back. The WPILib crew along with cots products (like the limelight) make this easier, but for us, without the VRM, it would have been impossible for us to have incorporrated a co-processor as soon as we did. Also, adding a switch was confusing at first too.
I understand the decision to drop those features. And, I hope something comes up to fill the void for teams that do not have established hardware to fill the void. Many teams (including us) have no access to electrical engineers. While using a switch and a buck converter do not require an engineer, the added confusion in dealing with the two most critical systems for the robot (power and communications) could push teams away from using offboard vision processors.

Even if the old vrm remains supported, I feel that will help. Having an officially supported solution for both would be even better.

Thanks for the feedback. I agree how important it is to provide easy support for some of these critical devices, the kitchen sink example was not to say that a smart regulator doesn’t have a place in the FRC market, it just wasn’t something we were going to build into the core system. With the design of the new control system we wanted to make sure the core parts were bulletproof for everyone and then work on things that extend those capabilities.

We will continue to look at the state of FRC system and adapt and make new products available that help the widest amount of teams. I can’t promise a smart voltage regulator this year, but REV does have some more things we are going to announce before the start of the 2022 FRC season.

Is there an immediate purpose for the RS-485 ports on the Power Distribution Hub and Pneumatic Hub?

As it was pointed out by @josesantos and others, we use RS485 on other devices we make.

While there are no current plans for this interface in FRC, or the crossover for these new hubs into other programs, we feel that it was worth it to standardize our hub interfaces and that:

Among other uses, the extra 12V ports at least make room for adding additional VRM-like circuits for whatever uses come up (Ethernet switch, Co-processors, etc.) – and anything that does PoE is likely to work with the Radio Power Module (of course, check the specs and rules).

*rules can always change, REV doesn’t make the rules so make sure to verify each kickoff.

Can we get a spec document similar to the one we have for the existing snap action breakers for the new REV breakers?

yes, this is coming. We also have additional data we will share about recovery times for repeated tripping, that compares to snap action.

Can you tell us the weight or is that coming? Don’t think I see it on the website yet.

Looks really slick. I for one am a huge fan of the voltage display on the PDH. Back in high school we used to add our own voltage readouts and mount them somewhere nearby, so very convenient.

The only thing I’m interested in is the decision to move from screw terminals to the lever WAGO connectors for the main battery power. Was the primary driving factor the convenience of a tool-less solution? I always enjoyed the flexibility and security of screw terminals, but these days I feel like an old man so maybe I’m just out of touch…

convenience of a tool-less solution

The removal of a compression lug step in the critical power path of the robot is wonderful news and is the definition of raising the floor.

The 120A fuse at least has room to use screw terminals, if that’s where your team is at.

The 120A fuse at least has room to use screw terminals, if that’s where your team is at.

I would highly recommend avoiding use of screw terminal lugs on a robot. They loosen under vibration and are not designed for stranded wire, so are difficult to get tight in the first place (plus there’s no calibrated way to tell when they are actually tight). Compression lugs are far more reliable.

I always enjoyed the flexibility and security of screw terminals,

I’m always sad to see a robot dead on the field due to a connector coming loose. I’ve seen unreliable connections due to loosened bolts on the PDP (and due to the blue PDB nuts before that). Spring loaded connectors like the WAGOs are great and nearly foolproof. Especially the ones used on the PDH, which are even nicer than the output WAGOs on the PDP, as they can be “latched” fully open to make it easy to get the wire fully inserted/seated with fewer hands, and still close with impressive force and will never loosen.

The removal of a compression lug step in the critical power path of the robot is wonderful news and is the definition of raising the floor.

Only if these lever nuts prove to be as reliable or more than the previous solution. Otherwise the floor and ceiling could both drop if we have more dead robots and radio/rio reboots.

I hope we can get some of these components onto robots at various off-season events and really put them through their paces.

The lever nuts used on the power channels are still a spring cage clamp from Wago. The guts of these terminals are basically identical to the ones that teams have used since 2009, the only difference being the integrated lever vs the screwdriver to release them.

When doing the design of the new system we spent time at events looking at robots, talking to FTAs and other mentors. One of the most common failure points on robots are bad main power connections either due to the screws coming loose on the pdp and main breaker or bad crimps/hold downs on those wires , both of those will be reduced with the wago main power connector on the PDH.

The main 120 breaker was outside the scope of this project, but if we could replace it with something besides a screw terminal we would, but now people troubleshooting robots can focus mainly on one place to check the power path instead of multiple devices.