We are looking into solutions and Ultimaker’s solution for the S5 (the air manager iirc) is one of our top picks. But because we usually don’t have a problem we might just leave it alone.

The forks on our 2020 robot were SLS Nylon because the original design was 55% infill Markforged Onyx and they snapped pretty quickly in our initial testing over the metal bump. Rather than playing around with optimizing the fork in week 3 of build we decided to just beef it up as much as we could to not have any worries about drivetrain functionality. Needless to say I wouldn’t run a PLA or PETG fork, but you could probably add guarding or change the slicer settings for the print to make Nylon, NylonG, NylonX, or Onyx work for the 2020 field just make sure you thoroughly test them before competing!

Our 2020 4" wheel forks are PETG. They have no problems taking the barriers full speed and have not failed. They are beefy. Also, we use 2 3" 10-32 socket flat head screws that are fully threaded into the fork. This reinforces the fork and pins the layers together. With out the 2 bolts our module would have problems.

Do you have pics of what the fork looked like that broke?

Mk3 is a good printer and it should do Nylon - you might consider building yourself and enclosure to reduce warping. It also comes with an all metal hotend so that is good. You will need to learn to maintain and fix it if something goes wrong as this still is a DYI printer

I believe some of the students have pictures of the forks before and after failure that I will try and dig up. For now it was a version of this which was adapted to accept a 4in andymark wheel instead of the custom 3in one that is shown. 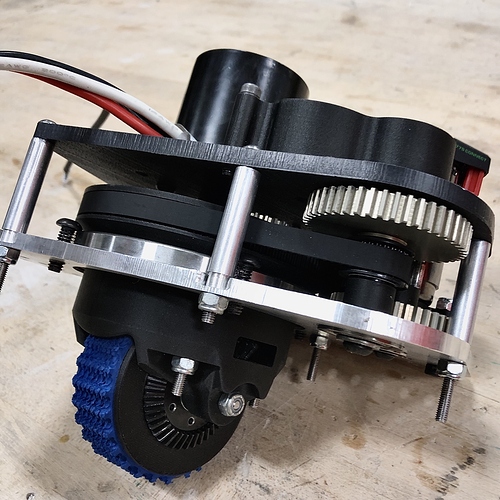 As another reference we ran the below set up at Kettering Kick Off 2019 and didn’t have any issues at a competition. When we got back from the competition we found a stress fracture in one fork which probably was from over tightening the bolts that ran through them. This eventually became a problem when we were doing drivers practice and resulted in the break shown below. 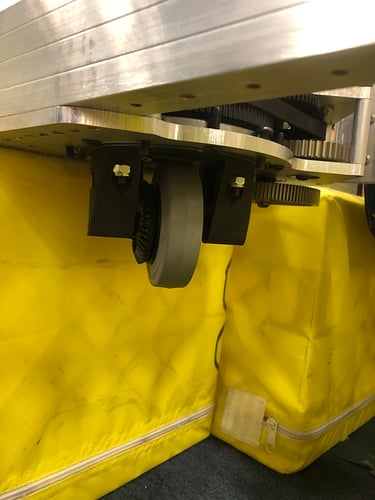 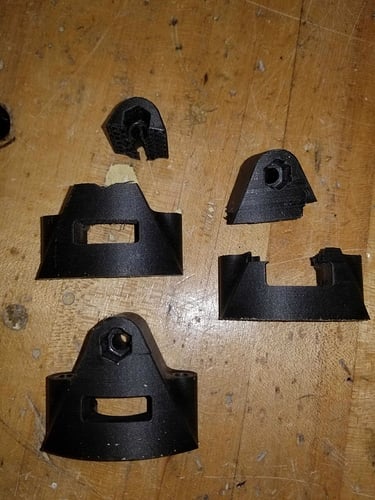 In an effort to increase the strength of the forks we joined the two side forks into the one you see in the picture at the beginning of the post. This did help, just not with ramming the steel bar at 13ft/s. In all fairness we did not have any performance problems with any of the fork revisions on the 2019 field until we cause the stress fracture.

That is exactly the failure I would expect to see. On the wheel forks extend the sides straight down at least .5" below the wheel bolt. Do not use a nut. Use a socket head screw long enough to extend all the way through the fork. Make this a 10-32 tap hole. May have to drill out for exact hole dimension. Tape this from the top down as far as possible with a hand tap. Go slow and clean the cuttings often. A normal hand tap most likely is not long enough. Use a screw to melt tap the rest of the way. Go in out in out quickly. This will melt tap the hole. Excess plastic will be pushed down and out. This is what we did and our PETG forks just take terrible abuse. The bolt does 2 things. Stiffens the whole fork and the threads act as a layer pin to bind the print layers. Also, higher print temp may increase the layer bonding. This may increase the warping problem. Not familiar with temps and setting on markforge printers.

just realized, if i went for a belt driven swerve, i could 3d print the timing belts in matterhackers flex pro filament https://www.matterhackers.com/store/l/pro-series-flex-flexible-tpe-05kg/sk/M9XNMJ2P

i found an old post talking about 3d printing a timing belt, i wonder how it held up

[b1dff9dc3cbd459c44536413fbf148e4_l.jpg] Since we’re showing off 3d printed parts I wanted to share an experiment I did tonight - I printed off a model of a GT3 timing belt using NinjaFlex. I wouldn’t trust it for most FRC power transmission but for either prototypes or transmitting rotations to sensors it should be solid. It would also probably be solid for many FTC applications. I’m going to order a roll of SemiFlex to see if it would be better at some time in the future. Settings: Prus…

in this someone brings up that it wouldn’t be a bad idea to add in markforged carbon fiber or Kevlar fibers into it to keep it reinforced.

Going even further into this rabbit hole, this swerve drive (if the team allows me) has a perfect and simple swerve for the belts to work on.

This is a swerve that I designed in the off season. I do not plan to use it for 2020, but its a possibility for 2021. I’m mostly looking for feedback and ways it can be improved. The goals for this module (in order from most to least important) are: Low height above the frame to increase space for other mechanisms Use as much non-metal materials as possible to reduce weight and speed up manufacturing times Use belts for azimuth to reduce backlash ( a big issue on my previous module) Keep man…

Here is a swerve I designed to be fully 3d printed a couple of years ago:
https://www.chiefdelphi.com/t/pic-fully-3d-printable-swerve-drive/166062

It’s a little out of date (from the pre-brushless era), but I think it would hold up if printed from nylon or pc.

Also on the topic of printed timing belts, I have made them for the purpose of testing fitment before real belts could ship, and it works ok fir that, but I would not recommend them for any actual load.

omeone brings up that it wouldn’t be a bad idea to add in markforged carbon fiber or Kevlar fibers into it to keep it reinforced.

This is how actual timing belts are constructed, and without that tensile member I highly doubt they would be usable with any reasonable sort of loads.

Less than good. I’d probably feel comfortable with it for sensors but nothing with any real load.

We printed a 95A TPU GT2 belt on an Ender3 as a test for our current swerve module before ordering the correct belt, and I concur with Andrew. I could definitely see using it for prototypes and maybe to drive some sensor or something, but I wouldn’t trust it under any kind of real load on an actual robot. It’s able to stretch too much and skip teeth once it is running.

A dual extruder printer that had the TPU on one head and a continuous fiber I do think would potentially be able to produce FRC usable belts, which would be really cool, but I don’t know of a currently available printer able to do this that doesn’t cost more then a new car.

You might be able to cnc kitchen it and insert fiber manually as it’s printing but that seems like approximately too much work for something that’s reasonably priced.

I just started printing some TPU95 and had thought about making belts. I agree with everyone else about not on the drive train but I think it could be a real option for an intake or conveyor. If you printed some pulley’s and a 2-3 inch wide belt it could work nice. It could be similar to the flat belts people were using this year just not as long.

I would Like to point out that interface was designed as a standard 1/2 hex in the original protos to help prevent that exact behavior. Buuuuut… it got changed somewhere in there.

and I still have the OG proto, so

Regardless, it would have done nothing to help w/ the backlash, so it’s really a mute point.

You may have heard coworkers or acquaintances refer to an inconsequential or irrelevant point as a moot point, or maybe you’ve heard mute point instead. Fans of the TV show Friends may have heard a third variation: moo point (because, according to...

Urban Dictionary defines it as “addressing the participants of a conference call while your phone is on mute.”

I learned something today.

Oh Marshall, what would the world do without you