We would like to thank everyone that made this robot and showcase possible. We had a lot of fun producing content, and an incredible robot for this years game. Good luck to all the teams this season who are competing in Infinite Recharge.

Thanks Week 6 for building this robot.

We have some photos and videos from this Sunday at 118’s field of your robot and Everybot in our photo gallery. 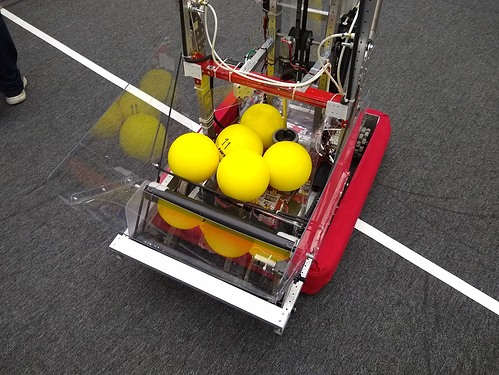 Really impressive robot, great job. I’d much rather see a high quality robot like this in a week than something scrappy in three days.

A lesson I learned from watching this robot is that you can really fill that outer port but you’ve gotta shoot with purpose to get any meaningful amount in the inner port.

Amazing bot! Will there be a spec release of what was put into this sick bot?

(Referring to the image)
What is the purpose of the rubbery looking cord in front here?

It keeps the balls out of a small dead zone in our hopper.

What’s causing the hopper wheel to ‘wobble’? Is it just that the motor/gearbox is mounted to a piece of polycarb?

The wobble comes from us poorly attaching the hex shaft to the versaplanetary. We found that the wobble actually really helped keep the hopper from jamming. We didn’t have a hex coupler so we taped the hex shaft to the output shaft by using a 2” vex hex spacer. The same effect could be achieved by mounting the Betty Crocker spinning mechanism to a piece of 1/4” or similar Piece of polycarbonate and by using a similar wheel/hex shaft setup and a proper hex coupler.

Thanks. Or by eccentrically mounting the wheel perhaps.

Possible yes, but when we tried it mounted to just polycarb on one side it worked very nicely.

Unique approach to a hopper for this year - interesting idea especially for teams that might plan to “catch” balls from partners during the match.

That’s the one thing we forgot to try at 118s facility, but we can fit 3 balls wide at a time into our hopper from the HP station. We also would have tried intaking 2 off the floor as we drive to the station to drop in the last 3.

I’d love to hear some veteran refs’ thoughts on the legality of that auto strategy in terms of the 5-PC limit. If robot X feeds all of its balls into robot Y’s hopper, when is robot Y considered to be controlling the balls? It’s feasible at many events that 1 robot will end up shooting 9 balls in auto. Will the alliance need to coordinate the feeding rate with the shooting rate? Or will the refs not penalize that kind of action?

Likely needs to be heavily coordinated, it isn’t worth the risk to get a penalty. Ideally you time it just right so there are never more than 5 balls in your robot at a time.

I love the crazy simple serialization system and hopper.

I’d love to hear some veteran refs’ thoughts on the legality of that auto strategy in terms of the 5-PC limit.

The rules have definitions on control that reasonably cover this scenario, I think. Here is how I would paraphrase a ruling based upon the rules, but keep in mind that the official Q&A is a better place to answer this question.

As soon as the ball touches the 2nd bot’s internal hopper, the 2nd robot has control of it. If the ball is in flight, however brief that flight is, then no robot has control of it. While a ball is contained/controlled by the first bot it is not controlled by the 2nd bot, even if the first bot is hovering over the 2nd bot. Note that this doesn’t cover a ball touching the ground, which gets into a different meaning of ‘control’ w.r.t. moving robots and incidental contact.

To be honest, if a ref has to study a moving robot to determine whether it has control of 5 or 6 balls, we can’t fault the ref for throwing a foul in the event that the timing is “just right” to not have actual control over 6. So for a real match, tune the timing to keep it obvious!

What the heck happened, this year’s Ri3D (or week one) robots are the best I’ve seen in some time. Nice work, it was a lot of fun watching yours and the Everybot play together.

We wanted to produce a quality robot that isn’t too complex for teams to build. A lot of thought went into every aspect of this robot.

Did you guys have any problems with balls jamming in the belt elevator up to the shooter? It looks like it is contacting a belt on one side and a polycarbonate wall on the other, and other threads of said that the balls stick to each other especially with only 1 side of active transmission.