We’re always trying to improve the design of our bumpers for usability and durability, and one aspect that has always been challenging is mounting strategies. We’ve decided that quick-change solutions like cotter pins and latches are too loose and prone to failure. We’ve had much more success with regular screws going into riv-nuts in the frame. However, the upper structures of our robots get in the way of a t-handle or drill coming down from above to screw in the fasteners.

My question relates to the design in the pictures below. We want to mount brackets to the bumpers that extend up so that the bumpers can be attached with horizontal screws. Would this design pass inspection this year? Per R402, the bracket tops are below the 7.5" limit. The drive rails and swerve modules back the bumpers along the entire perimeter. The pocket routed into the plywood backing is 2"x2" by 0.125" deep, which is of particular concern considering R408A allows small pockets and cutouts but gives no dimensional guidelines. I don’t think structural integrity would be impacted, but that’s more of judgment call during the inspection. Let me know if I’ve forgotten anything. 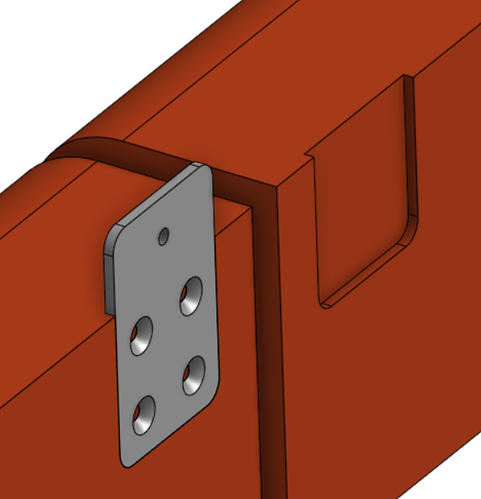 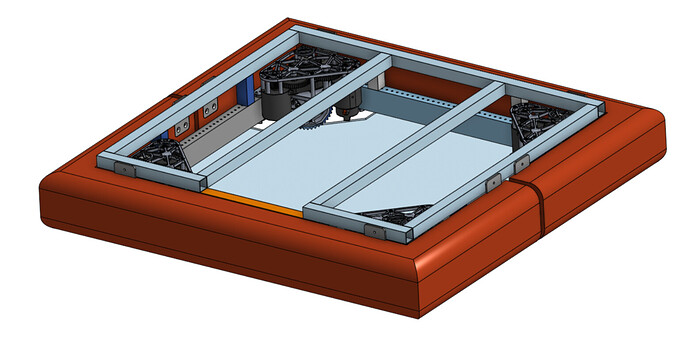 I suggest it might not be fun trying to get the fabric squeezed into the “divot” in the backer boards. Also it looks like you would need to be very accurate in your bumper sizing (again the fabric will be annoying). On the
other hand, of you pull it off, it should be very sturdy.

Why not just cut a slit and put the bracket through, and then have the fabric attached overtop of the bumpers?

That would be a lot simpler – but not what was shown.

the bracket tops are below the 7.5" limit

Granted that, I don’t see any reason this wouldn’t pass assuming the materials and construction are right and you add some numbers.

Robot Inspector here. What you propose should be fine. The bumpers cannot be taller than 7.5", but the mounting brackets can be any height. If aligning the holes is difficult, you can put a horizontal slot on one of the bracket holes to provide a little “forgiveness” in the fit.

If you don’t want to completely remove the screw during bumper changes, you could cut keyhole slots in your brackets: 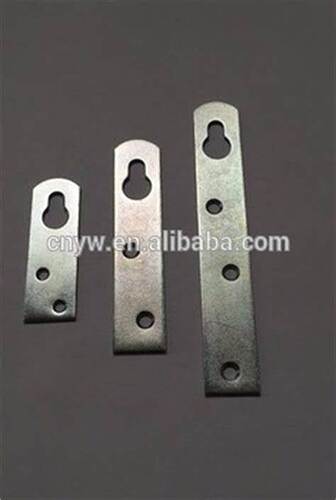 but the mounting brackets can be any height

This is not true. The mounting brackets are an integral part of the bumpers. R402 states:

*BUMPERS must stay low. BUMPERS must be located entirely within the BUMPER ZONE, which is the volume contained between the floor and a virtual horizontal plane 7½ in. (~19 cm) above the floor in reference to the ROBOT standing normally on a flat floor. BUMPERS do not have to be parallel to the floor.

I’d argue that’s not what that rule is intended for. It’s meant so that the soft parts of the bumpers on the robots are always going to collide and there will never be frame-to-frame contact. Even if technically part of the bumper would be above 7.5” as long as all of the actual soft bumper part was below 7.5” I don’t see any reason why that bot shouldn’t pass.

Trying to read intent into the rules is how we, as inspectors, get ourselves into trouble. This is how things pass at one event only to become a problem for the team at the next. I’ve seen it happen, and it sucks. Please, when you’re inspecting, stick to the rules as they are written, and not your interpretation of the intent - and if there’s any doubt, escalate it to your LRI. Believe it or not, this sort of situation (bumper bracket above the bumper zone) has been discussed at LRI training in the past!

Seeing as your shop is just down the street from my team’s, I’d be happy to stop by any time to give feedback should you implement something and want more direct opinions before getting to an event

With this design, my concerns would be:

I’m not saying that this design would fail, and i’m not saying that it would pass. But these are the specific items I think of when looking at this design. I’m confident that such a design could be implemented well, and be legal, and i’m confident that it could be implemented poorly and be illegal. I would consider how you may strengthen the mounting with a similar bracket below the bumpers, if it proves necessary.

Thanks for the advice! I’ll make sure the students see your list. We’ll use this summer to prototype and make sure we’re on the well implemented/legal side of things

And we’ll have to set up a team visit sometime

Jon is probably right. At the two competitions I volunteered at, the Lead Inspectors instructed us to make sure the robots adhered to all the rules, but if an issue was open to opinion, always give the team the benefit of the doubt, as long as it wasn’t a safety issue or gave them an unfair advantage.

But I’ve been to competitions where the RIs seems to be looking for reasons to fail a robot. If a rule was vague, they always interpreted it against the team. We need to design/build robots to meet their requirements.

Jon is probably right. At the two competitions I volunteered at, the Lead Inspectors instructed us to make sure the robots adhered to all the rules, but if an issue was open to opinion, always give the team the benefit of the doubt, as long as it wasn’t a safety issue or gave them an unfair advantage.

That has been true at all the events I have inspected at this year and in years past. Unfortunately, there were also cases where they reluctantly had to draw the line and disallow something.

One more RI weighing in: I would have no issue with that bumper design. The whole idea of a height limit is to get sufficient pool noodle contact between bumpers of colliding robots.

With the caveat of - I need to see it and get hands on it to rule definitively… If the bumpers themselves are otherwise legal, and the only remaining question is the mounting brackets…

I would have the following questions:

I understand that any decision here would likely require a team to majorly rework something, and would run it all by the LRI to verify before making the team go through all that.

I am trying to learn more about mechanics, so please bear with me as I to take this opportunity to explore it with a little thought exercise.

In the typical bracket design (L brackets), when the bumper receives a heavy impact that would push it away, does this translate into (mostly) shear force on the screws mounting the brackets to the bumpers, and tension (mostly) on the bolts mounting the bumper to the robot?

I think this because when we forget to tighten our bumper mounting nuts, the bumpers pop up upon impact.

If instead, the brackets were straight, would that lead to more shear force on those bolts?

I am not sure it matters (we usually use drywall screws to mount the brackets to the backer board, but we use at least two, usually three, per bracket) but I wonder if it would require more than one bolt per bracket, or larger bolts just for a safety measure.

Or does it not matter, that the bolts we use are overdesigned well enough to handle all we throw at them?

Ideally, your bumper’s lumber and/or cloth or hard parts behind the lumber are directly against the frame perimeter. Then, most of the collision energy not dissipated by the pool noodle will go into that solid-to-solid interface, not the bolts. If there were a gap, the worst forces on the bolts would likely be shear on the vertical bolts.

As to why your bumpers pop up on a collision when the bolts are loose, that’s the one degree of freedom you left them. Force is going to bounce around, and things will move any direction they have the chance.

Or does it not matter, that the bolts we use are overdesigned well enough to handle all we throw at them?

I don’t think I’ve ever seen a bolt/screw break on bumpers before. Far more common is for the screw to pull out of the plywood. This is ultimately a result of the plywood failing, most often caused by the choice of screw leading to weak threads being created in the plywood.

I have also seen wood screws pull out because they were too small/short, they were installed too close to the edges, were over-torqued when installed, stripping the threads in the plywood and/or a low quality (inherently weak) was used