Team 3538 is proud to present our Detroit Champs Recap video and a digital version of our pit technical poster!

This has been an incredible year for our team, and it was made possible by the hard work of our students and mentors, the support of our sponsors, the Avondale School District, and the parents. Feel free to post questions in this thread, contact frc3538@gmail.com, or visit team3538.com, for more information!

We had a great time playing with the RoboJackets at Gull Lake this year. Always fun to watch your robot go full throttle off of level 2 during sandstorm! Congratulations on a great season. We look forward to seeing what you have in store for next year.
Your friends from 5675 Mattawan WiredCats.

That’s a great tech poster, and it gives us Houston people a way better look at your robot than we’ve otherwise had. Great work this year!

Side note: you’ve got a typo. The poster says you’ve got 2 Colsons and 1 Omni per side, but the render shows the opposite.

Good catch, we did actually end up playing with the two colsons and one omni configuration. The original design intent was four corner omnis, but that ended up being incompatible with the initial climbing method that required the back wheels to have high traction with the HAB platform. Before states we changed up the climbing method to lift the front of the robot with the wrist (rather than the separate set of wheels that deployed out the front of the robot), but it turned out that the driver preferred the back+middle colson/front omni wheel configuration. At some point somebody attempted to update the CAD model and this happened, and we never updated the render after that. Hazards of continuous improvement.

I’ve gotten a few PMs about it, so here’s a slightly more indepth mechanical explanation of the PTO gearbox. 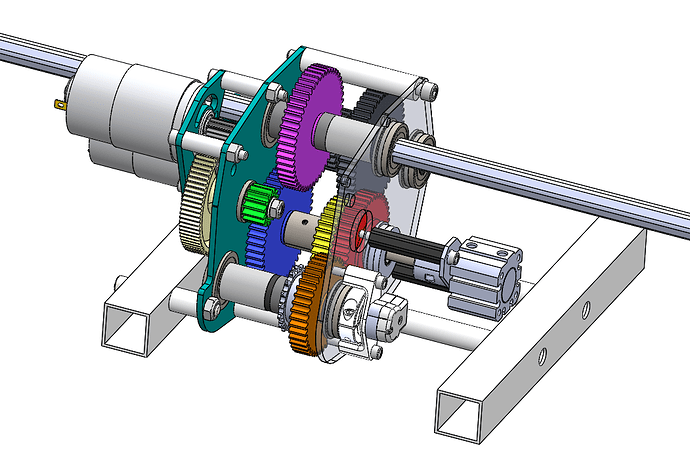 In this screenshot, you can see the two 775 motors (left) driving a 32DP gear (light yellow) to achieve as large of an initial reduction as possible. The 32DP gear rotates on the same axle as the green gear, which then drives the blue “input” (traditionally it’s an output when used in a drivetrain gearbox) gear of the ballshifter assembly. The blue gear transfers torque to either the yellow ballshifter (BS) gear or the red BS gear, depending on the state of the balls in the shaft.

If the shifter plunger pushes balls into the yellow BS gear, torque is transmitted down a few more reductions to the magenta gear, which is on the axle that acts as a winch for the gantry.

If the balls go into the red BS gear, torque is transmitted to the orange gear, which turns the sprocket that controls the elevator chain.

Everything with the ballshifter assembly was purchased from VexPRO.com, and they’ve got some great documentation on it as well.

Oh man I can’t believe I missed this, love the video guys, it was great to finally be on the same side of the glass with your team for once and make such a strong worlds run, hope to see you either in the offseason (IRI maybe?) or at champs next year!

Fun fact: Team 3538’s competitive season has somehow ended with 195 for the past 4 years, every year we’ve made worlds

I was very curious about your guys wrist, this year one of our big down falls was the abundant about of wrist failures we encountered, what did you guys do to make yours so successful? I really love it and would love to learn more about it! (Software wise)

The core of the wrist’s stability comes from an intense focus on software validation. Before we ran any significant code changes at a competition, we had already run dozens of practice cycles at home to identify and resolve as many problems as possible.

This also meant that we gradually stepped up our software integration as the season went on, slowly adding more functions as they were extensively validated. At our first competition we ran the wrist under 100% manual control, at our second the wrist was limited by limit switches, at the third it was PID stabilized, etc.

This gradual step up eventually ended where we were at worlds, with PID-controlled preset angles for numerous actions, limit-switch soft stops to prevent self destruction, and a 100% manual override if anything was to fail.

Another huge part of the wrist’s stability is pre-match function checks during competitions. We are very thorough and test every wrist and elevator preset available to the drivers. If we had missed a limit switch being broken or the encoder counting incorrectly, we’d notice that something is functioning incorrectly and either pursue a solution to the problem or decide to go to manual control.

Let us know if you have more specific questions. I also think we’ll have our code publicly released shortly!