I’ve been waiting a while for this one.

We’ve had a lot of questions surrounding our annual Fight Night tournament. While we are hoping to have our 5th annual tournament this summer, it is totally possible that things can be delayed due to the current COVID-19 crisis. When we have a more solid answer, so will you.

In light of the current suspension of the INFINITE RECHARGE season, we found ourselves with a little extra time on our hands, and thought some people could use a little distraction.

Here is the application form if you would like to compete. Please refer to the Handbook for more specific instructions.

This is gonna be bigger than WrestleMania!

Time to start work on Pun-Slinger V. And thanks to Nathan, order a new radio.

Submitted my application. Great time last year, hope to do it again!

I’m proud to Announce that the Mean Joe’s will not be bringing a hatch panel spinner to this year’s competition…we’re bringing a control panel.

Nobody used it anyways.

Someone reached out to me in a PM asking about what I use for a control system. I’m going to post it here, just to lay it out:

Pun-Slinger I through IV have run on the same control system:

The Cheap and Dirty was already going to get replaced this year as the whole thing was starting to wear out from abuse, but a dire shot from Nathan in my second fight last year murdered the receiver, UBEC, mixer, and part of the housing on one Talon. So I’ll be in the market for more things, though I expect most of my purchases will be in the same vein. Now that 1293 has means to do PowerPole connectors, I may borrow their crimpers and do a removable link instead of the switch to make things more compact (if, of course, we can access the shop before Fight Night).

Of all the things I got entangled with while working at AndyMark, Fight Night was the most horizon-expanding both as a competitor and in my day job. (The 2016 edition was grounds to learn Premiere and make a found-footage recap video, while the 2017 edition had me learning OBS enough for a serviceable fly-on-the-wall stream. The 2018 edition after I left was lost to Twitch, but the 2019 edition blew the doors off anything I did.)

If you’re on the fence, do it.

Fainting Goats have applied for a triumphant return to fight night.

Ready for my second time around. I went 2-3 last year, but my losses were to the champion, runner up, and one of the semifinalists.

First year I might actually get to join, super excited for this.

No allowance for a melty brain robot this year? That’s quite disappointing. We had plans…
Either way, I’m excited to (hopefully) join the carnage, since the pandemic has opened up my schedule quite a bit.

The Nature Bot will return in some fashion. Might be the end of the lawnmower of death design though, too many weaknesses. 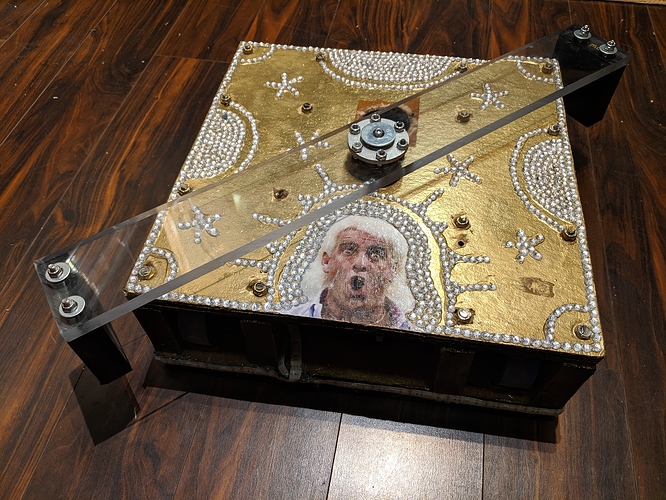 And for anyone on the fence, do it. It’s a ton of fun.

Just wondering – why does the handbook specifically call out LiFe batteries as disallowed? Is it because there is history of people trying to pass them as Li-Ion? Or is there some safety issue with the chemistry?

Most likely a chemical safety thing, but that strikes me as interesting. LiPO batteries are notorious for catching fire if you look at 'em wrong, but LiFePO are generally regarded as much safer.

I was thinking about hopping in but decided that I don’t have time.

Hey… As a member of the team that earned 100% of the control panel points in the Indiana District, I feel personally attacked by this comment.

1038 is excited to submit an entry or 2. Since we haven’t done it before trying to brain storm some concepts remotely of course, before submitting our applications.

All, the Q&A is now open. Please be sure to read the manual before asking questions.

If you do push it back, you should push it back to Halloween and call it “Robot Fright Night”.

Having lived in Kokomo for two Halloweens, I can say with confidence that that’s one way to avoid the murder-by-heat that was Fight Night 2019.

Moving it to Halloween would not allow us to have intern involvement, which is actually where the whole thing started - as a summer fun activity that would challenge our interns. Other staff joined in too, and then it kinda grew a lot from there.

Moving it to Halloween would not allow us to have intern involvement, which is actually where the whole thing started - as a summer fun activity that would challenge our interns. Other staff joined in too, and then it kinda grew a lot from there.

Man’s not lying. (My copy of the 2016 bracket shows five staff and three intern entries, although a couple of those staff entries were borderline meme-tier.)

I hope a July/August date can prove feasible, as Indiana summers are (usually…) wonderful backdrops for this event. Indiana ordering shelter-in-place already is a promising step. Whenever there’s a date though, I’m doing everything I can to get there.

How big of a tournament are you thinking? Variable based on demand?