I will be going over the design and development of the robot arm we made for our graduation.

To start off I will give some background as to how this all started. Since our school (Don Bosco Technical Institute: https://www.boscotech.edu/) was online and at home due to Covid-19, graduation was difficult. Our school faculty and staff had started coming up with ideas of how to get around the limitations of Covid-19. One teacher involved in our school’s technology department, came up with the idea of having the robot handing out the diplomas for graduation. It was initially unclear as to how it would do this but in the past one of our robots lit a bonfire (https://www.youtube.com/watch?v=V7Ts-lPDQGY) (Ya'll ever light the Homecoming Bonfire with an FRC Robot?) (https://www.youtube.com/watch?v=q8ocMpDhjm0) and this year the robot had participated in dodge-ball during our school’s spring rally (no media unfortunately). The shop was already open as our school was developing face shields (https://www.boscotech.edu/bosco-tech-students-are-using-technology-skills-to-help-medical-professionals/) (no longer in production) so it was easy to get started.

I was assigned to design the diploma manipulation system and got started right away. The first thought I had was to remove the shooting system from the turret and so I did. After that I made the most simple thing I could think of which was just a t-slot extruding out from the turret with a box at the end which would have worked but it had no style factor. I decided to go with something more complex which I started to design in SOLIDWORKS CAD. It was a robotic arm that would stay level and be driven with one Falcon 500 motor. One of my mentors wanted me to use a four bar mechanism but I didn’t think that would be complicated enough so I tried to go with something different.

Anyways, now I’ll get into the details of the the system:

Untitled1920×917 469 KB
First off we have the turret and base plate. The turret gear is a two-piece 3D printed polycarbonate gear with 330 DP 20 sized teeth. It is driven by a Falcon 500 motor with a small gearbox. Since weight wasn’t an issue the left over 1/4" aluminum circular plate from the structure plate for the turret gear was used for the base of the arm.

Untitled11920×917 556 KB
To move the arm there is a 3 stage gearbox held together with 1/4" aluminum plates which is mounted to the base plate with a series of 1/8" 2x1 aluminum tubes. The shaft on which the arm is mounted is a 1/2" Aluminum Hex Shaft and to secure the arm to this shaft, there are four Vex Hubs and two solid reinforced PLA inserts. At the end of this transmission is a system which was supposed to reverse the direction of the motor and send it through a chain to the joint in the arm to move the top part of the arm in the opposite direction. This system worked but it didn’t keep the top of the arm level as I had thought it would. I later found out that to make the chain method work, the bottom sprocket had to not move at all (rather than in the opposite direction). I made this change although it is not in the CAD and it worked great. This method is technically still a four bar but with a chain instead of a bar (more movement flexibility). 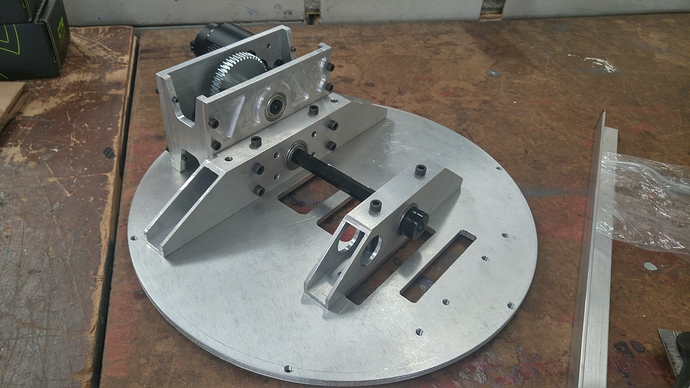 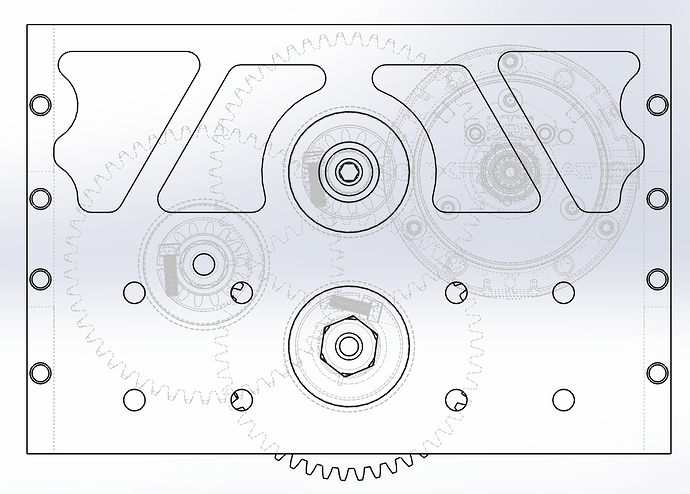 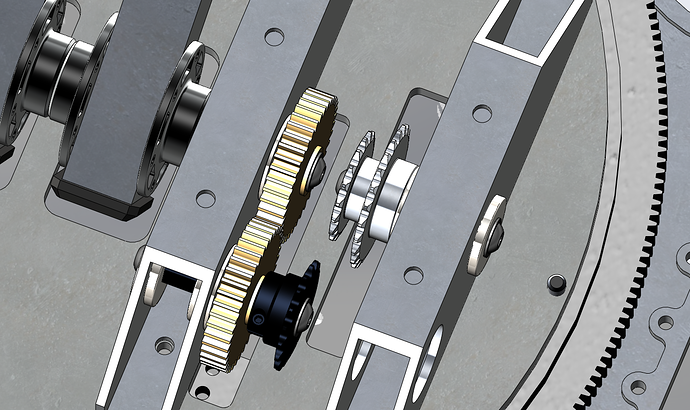 Untitled31920×917 561 KB
The arm itself has two stages connected with one joint. It is constructed of aluminum tubes and the joint is constructed of four more VEX Hubs and some more 1/4" plates and solid reinforced PLA inserts for support. There is also a chain tensioner that I added onto the arm without CAD. 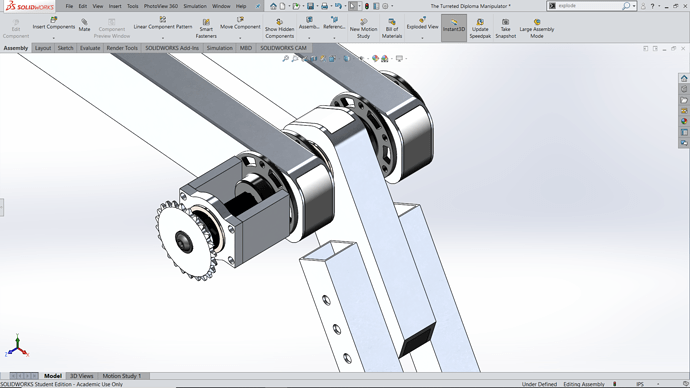 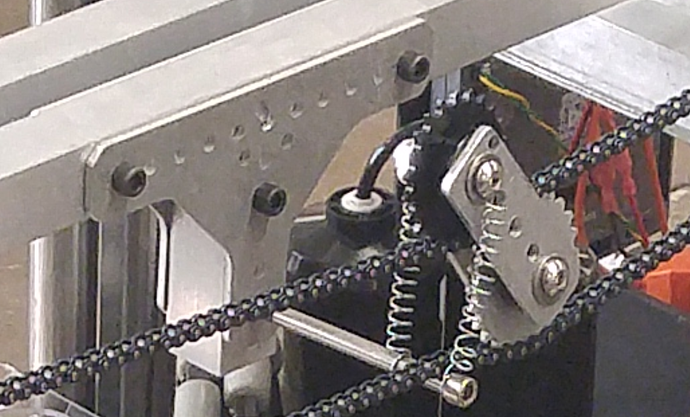 Screenshot (205)1450×878 1.16 MB
The diploma holder is constructed of a single piece of 0.1" lexan. It is bent into shape and then spray painted. It is quite easy to load/unload the diplomas and they don’t have any chance of falling out. 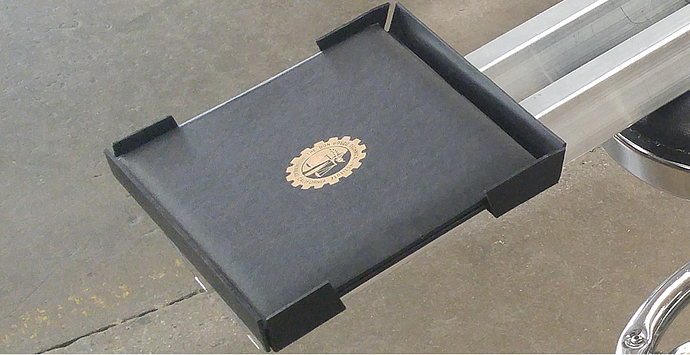 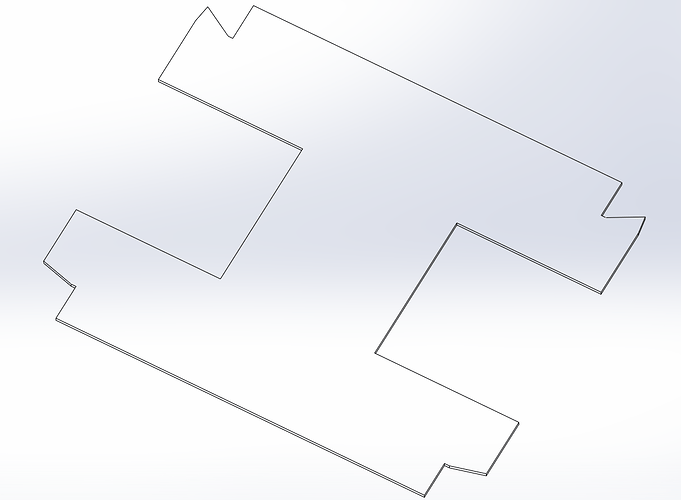 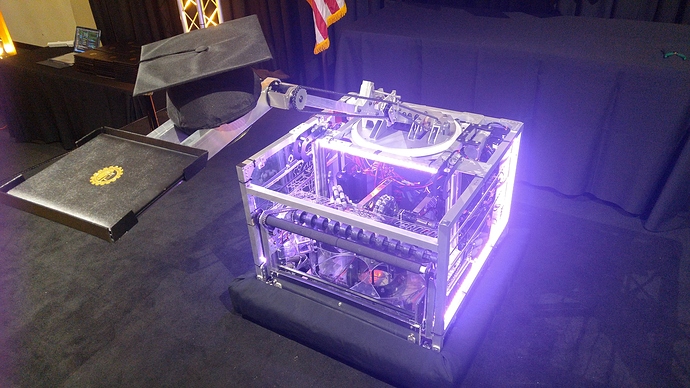 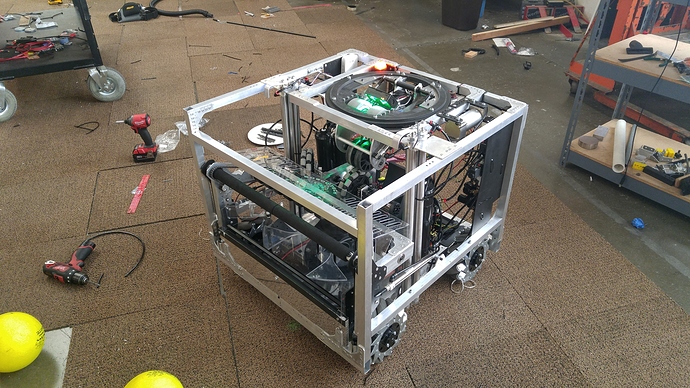 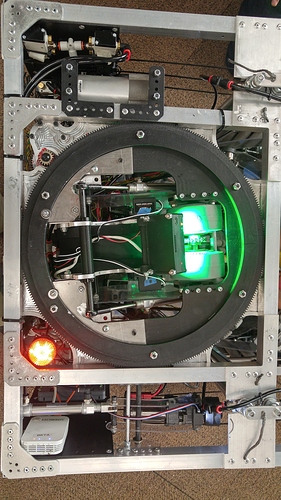 Untitled1920×917 427 KB
Keep in mind that the modifications are made from leftover and spare parts/material from previous seasons (this heavily influenced design). Visit the following thread for video footage of the system in action: Robot Handing Out Diplomas During Graduation
8 Likes
Robot Handing Out Diplomas During Graduation
Artsy Robot Photos
NoahE07_6656 June 25, 2020, 11:09pm #2

Awesome modificatiions made! Wish I got to see the original in action!