If any of you watch the show Battle Bots, you know the bot Tombstone. Tombstone is brought out to the field by a remote control cart with treads.

I was wondering if something like that is legal in FRC.

Without looking at the rule book and just using my memory of the rulebook the robot itself has to be turned off when going between the pits, but this wouldn’t be the game robot itself. Theres also a rule about having to carry the bot onto the field, but if this second bot was to be just like a cart, and not go on the field, what would be the problem.

(I know this isn’t the most probable thing, you should have easy control of your bot cart, and this is probably improbable, but just for kicks and giggles I was wondering if it was technically legal)

Go ahead and try it. We need yet another rule, don’t we?

The rule book is already like 300 pages long why not make it longer, right?

Back in the early 2000s this was actually a thing. Teams would trick out their robot cart with LEDs, sound systems, massive subwoofers, electric motors etc… It became a contest of who could build the most ridiculous battery cart and what “walk out song” your team was playing. I cant remember if FIRST added a rule or just sent out a sheet banning them.

Is there a current rule for it, not to my knowledge… Would I call a remote controlled battery cart that is 250 lbs with a robot on it a good idea… depends on your perspective on whether you want to invest the time and money into it. The only part I would see as “against the rules” would be your wireless communication but if you used a tether who knows…

5006 had a drivable robot cart I think. Don’t know if they still use it or even use it at all.

Several teams have them, but they seem to be more hassle than they’re worth. Usually poor turning radius, too bulky, batteries die and you have to push against the motors, etc. Something like an electric pallet jack (ya know, designed to be OSHA compliant and such) would probably be better.

I mean, nothing tops almost getting run over by a UL safety rep on a Segway, but being hit by a powered robot cart certainly comes close.

From the Manual Last Year.

Robot Carts
Most teams use carts to transport their robot throughout an event. Carts are not required but are strongly
recommended (to minimize risk of muscle strains, dropped robots, and other hazards).
Any team using a robot cart must abide by the following rules:
E18. Carts must be safe and easy to use. Carts must be easy to control, maneuver, and pose no risk to
bystanders.
Violation: A verbal warning. Repeated violations will be addressed by the Head REFEREE, the Lead
ROBOT Inspector and/or Event Management.

E19. Carts must be the right size. Carts must fit through a standard 30-inch door.
Violation: A verbal warning. Repeated violations will be addressed by the Head REFEREE, the Lead
ROBOT Inspector and/or Event Management.

E20. Keep carts where they belong. Carts must remain in the team pit area (or in the cart staging area, if
during a match) when not in use.
Page 6
Violation: A verbal warning. Repeated violations will be addressed by the Head REFEREE, the Lead
ROBOT Inspector and/or Event Management.

E21. Carts are not noise-makers. Carts may not be equipped with music or other sound-generating devices,
except for devices of reasonable volume used for safety purposes (e.g. to make others in the direct
vicinity aware that a robot is on the move).
Violation: A verbal warning. Repeated violations will be addressed by the Head REFEREE, the Lead
ROBOT Inspector and/or Event Management.

In addition to the rules listed above, teams are strongly encouraged to put the team’s number on the cart, refer
to the FIRST Safety Manual for robot lifting techniques, and practice putting the robot on and off the cart to
develop a quick, fluid routine.

batteries die and you have to push against the motors

@troy_dietz touches on many valid concerns. 1729 has had a motorized robot cart over the years. I think we’re currently planning the third revision but it might be the fourth.

It started out a summer project with new students and the KoP kitbot materials. It’s evolved over time.

Our robot cart has been tethered nearly all the time. I’m not a mechanical mentor, so I can’t speak to the details.

I can mention that if you’re going to take on this type of project, in addition to the other concerns mentioned, make sure that you have enough space in your trailer / truck for it. Also, make sure you either design for enough weight load and battery usage or leave enough time to iterate through the testing time.

And there we have it. A powered cart is within the rules as long as it complies with E18 and E19 above (and other rules that might apply, like the prohibition on wireless devices that would require a tethered control system.) Of course, that might be the problem, since it’s unlikely that a powered cart will be as easy to control and that the refs will agree that it poses no risk to bystanders. Honestly, it’s pretty easy to make a really cool cart that’s unpowered and expresses your team’s brand, so why go there?

So, let’s go that next step.

BMW (and firends) designed an autonomous cart that can drive through the plant to deliver parts to the assembly line.

All of the problems quoted are just design problems.

Battery dies: A mater of designing the proper power source for the design specifications. No one said you had to keep using motor cycle batteries. How about a full sized deep cycle battery? And there are many other options.

Turning radius: Again an engineering problem. Turning radium is determined by wheel base sizes and steering mechanism and other factors. What about 4 wheel steering as a possibility.

Now back to my original thought (autonomous). I really think that sensing it’s surroundings and path following and sound input as commands could easily suffice to make it work.

Could you post some links to these old robot carts? I joined FRC after this era and it sounds like a lost art.

i know we had a few years of disapointing carts, but we return with another good one. Here are some stats- 38 cell GM hybrid car battery 2 kilowatt inverter full computer (XP) with wireless 200 watt panasonic speaker and deck system 2000 watt kicker L7 competition subwoofer powered by a sony 1200 watt amp red, blue , and white neons, all on switches so you can switch between colors flip-up oi and computer screen all in all, the cart weighs about 400 lbs [image] …


pic: Robostangs FRC Team 548 2008 Cart The story goes that it was so heavy that the drive team needed a running start to get up the ramp onto the field at Atlanta. Also, we like to think this is the first of two or three rules that exist because of the Robostangs. The cart had a multi-kilowatt sound system that would drown out the event sound system.

Our current cart has a few robot batteries, an inverter (which has let the smoke out multiple times) and a bunch of LEDs.

Any chance there’s some video of this cart somewhere? It seems incredibly amusing.

I don’t know of any. I mean it’s almost 12 years old. Maybe it might be in the background of a match video somewhere, but I doubt it. 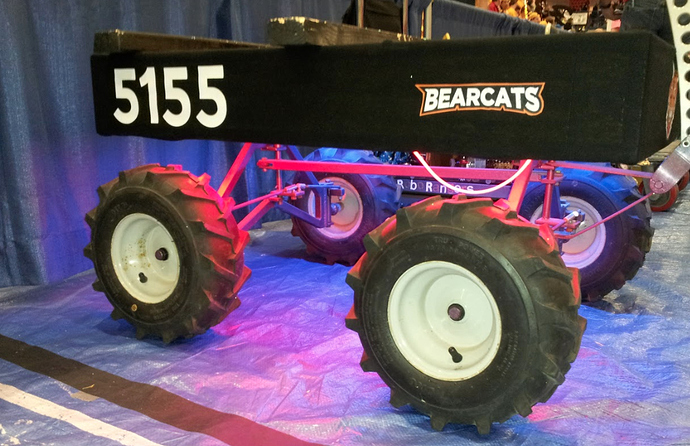 I don’t know how many times our cart’s wheels have skittered and you have to drag it against the wheels. It sucks lol

Back in the day, Team 68 Truck Town Thunder had some awesome little electric Chevy/GM truck golf carts they would drive around at events and I believe transport their robot on.