I noticed today that I was listed as a Contributor to multiple projects that made it into GitHub’s Archival Arctic Vault (More info Here). When I hovered over it I noticed that one of the repos was Team 3468 MAGNATech’s 2019 DeepSpace Repo. I then checked and saw that Team 3946 TigerRobotics’s DeepSpace Repo was also included. So I figure quite a few team’s repos must have been included, at least those who keep (or make?) there repos public. I noticed that other FIRST Aligned projects such as The Blue Alliance, FIRSTMap and FRC Code Database also were archived.

So, I’m curious, who else’s robot code made it onto one of the 186 Reels of Hardened Microfilm now stored 250 meters beneath the Arctic? Unfortunately GitHub isn’t directly labeling Repos that were included just listing some of the repos on profiles of people who contributed. So you need to go to profiles of people you know contributed to check, which isn’t as straightforward as I wish it were.

Somehow a little project that I tinkered with did. A while ago I tried to implement a GUI that created .java class files in JavaFX (a bit similar to RobotBuilder, but for non-FRC use too), and it didn’t go very well. I haven’t touched that repo in months. Somehow, that code is now under 250 meters of ice. And that is my only frosted contribution.

It seems that none of the WPI Suite repos made it,

Why do you say that?

The 02/02/2020 snapshot archived in the GitHub Arctic Code Vault will sweep up every active public GitHub repository, in addition to significant dormant repos. The snapshot will include every repo with any commits between the announcement at GitHub Universe on November 13th and 02/02/2020, every repo with at least 1 star and any commits from the year before the snapshot (02/03/2019 - 02/02/2020), and every repo with at least 250 stars. The snapshot will consist of the HEAD of the default branch of each repository, minus any binaries larger than 100KB in size—depending on available space, repos with more stars may retain binaries.

According to Peter Johnson’s Profile (PeterJohnson (Peter Johnson) · GitHub) allwpilib made it in.

EDIT: Also GradleRIO and DetectCoral according to other WPILIB Project Contributor’s profiles.

I didn’t get the badge for any of the WPI repos (even though I have contributions in quite a few of them), so I thought they didn’t make it in. However, if the snapshot was in 02/02/2020 then it makes sense as my first (pun half intended) contributions were later.

A program I wrote to relay a Pixy 2’s output through NetworkTables made it in: GitHub - bobbysq/pixy-python-nt

It also looks like our 2020 code is in there, albiet an early version because of where it cut off.

Edit: I would also like to apologise in advance to the aliens, post-society humans, or evolved dolphins that find my code. Sorry there’s no README.md yet, maybe I’ll head up there and write it down for you someday.

Cool find. I am apparently listed as a contributor for more than a few things:

I just checked and noticed I’m listed as a contributor on some things too!:

An Excel spreadsheet with macros I made for automatic game data processing made it into the vault.

I am having trouble finding indications of which repos made it into the archive, but the info page says the following…

Edit: I realized that Android devices do not load the github profiles showing the badges. I am listed as a contributer as well: for RobotPy (my first accepted PR, thank you all for your help).

WPILib is included in the vault as well(I wonder if they will have difficulty pronouncing WPILib in 1000 years).

Looks like all or most of the LigerBots code was included.

Does anyone know where you can see the full list, or a badge/tag on a specific repository?

Just for clarity, I thought I’d post a screenshot of where you need to look to see which (if any) of your repositories made it underground. 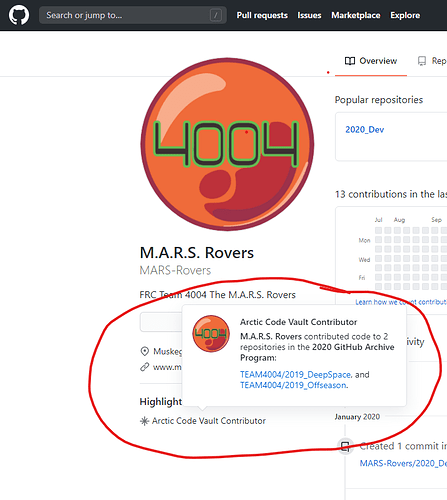 An (unfinished) version of our team’s scouting program and our (unfinished) main 2020 robot code were added to the vault. Shame that the snapshots had to be taken in the thick of build season…

A bunch of our team’s robot code made it into the vault, including our 2018 code (thank that year, it was the only normal one for me)